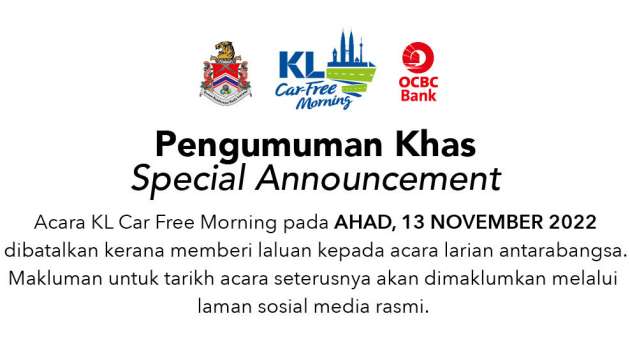 The KL Car Free Morning working committee has announced that there will be no KLCFM this Sunday, November 13. The weekly Sunday morning open circuit around the city has been cancelled to make way for an international running event, it says.

Said event is of course the KL Standard Chartered Marathon (SCKLM) 2022, the main event of our local race calendar. This year’s SCKLM features a completely new route for the 42.195 km full marathon, which takes runners on a tour of the KL city centre (Jalan Raja Laut, Jalan Sultan Ismail, Bukit Bintang, KLCC) before heading down Jalan Ampang to enter the AKLEH. You’ll then run back towards the city centre and make a U-turn at the end, crossing the Saloma Bridge twice.

After being a tourist on foot, it’s all the way to Ampang, joining the MRR2 briefly before running almost the full length of the DUKE highway. FM runners exit the DUKE at Jalan Kuching and at this point, you’d have done 35 km, with seven more to go all the way back to Dataran Merdeka for your medal. No Bukit Tunku this time.

The 21.097 km half marathon route is pretty much similar to the FM route, but without the AKLEH U-turn and DUKE. As for the 10K run, it’s pretty much like the KLCFM route, but instead of turning back into Jalan TAR to finish, they’ll be running straight to Jalan Kuching and Jalan Parlimen before a final downhill dash to Dataran Merdeka.

The full marathon starts at 3.45 am on Sunday, while the half marathon will be flagged off at 5.45 am. Note that the 10 km run will happen on Saturday, November 12 – flag off time for the competitive speed category is 6am. Plenty of roads will be closed in stages – check out the full list – so if you’re not taking part, it’s best to just sleep in and avoid breakfast in KL this weekend.

As for the KLCFM, will there be one next Sunday? That’s a day after GE15, so we’ll see.