Whatever happens, 2021 has got to be better than 2020, right? Why, just look at the roadster supercars that will be available then: we’ll still have the Ferrari 812 GTS, the McLaren Elva arrives in American garages in 2021, they’re making as many C8 Corvettes as they can and you can take the top off yourself for less than 60 grand. And now we have seen photos of the Aston Martin V12 Speedster moving down the road under its own power. Yes, 2021 will be better than 2020, I guarantee it!

The Aston Martin V12 Speedster “debuted” at the company’s Gaydon, Warwickshire headquarters in March, after the Geneva show was cancelled, the first of many such cancellations making 2020 so memorable. But we hadn’t seen the car since, until now, when Aston Martin handed out these six photos of it in motion on a public roadway. Cheers!

As you’ll recall from its debut earlier this year, the V12 Speedster was created by Aston’s bespoke customization service “Q by Aston Martin.” Q, as you’ll also recall, is the techno wizard who makes all those cool devices for James Bond. Q brought the car from an idea to a rolling reality in 17 months, and Aston will be rolling them into showrooms in the first quarter next year. 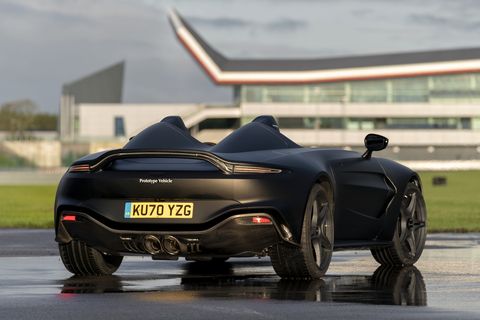 The V12 Speedster sits on its own chassis, a hybrid homologation of the DBS Superleggera and the Vantage. It rides on a double wishbone front suspension and a multilink rear with coil springs and adaptive damping that can be set to Sport, Sport+ and Track modes. Carbon ceramic brakes are standard as are 21-inch forged center lock alloys.

The unique carbon fiber body shares no panels with any other Aston Martin, but has elements from several, dating all the way back to the 1959 Le Mans-winning DBR1. Design director Miles Nurnberger said there’s some CC100 Speedster Concept in there, too, along with some 1953 DB3S in the mid section. He even made the blanket reference to fighter jets as inspiration, particularly the Northrop FA/18 (so, USA!USA!USA!). 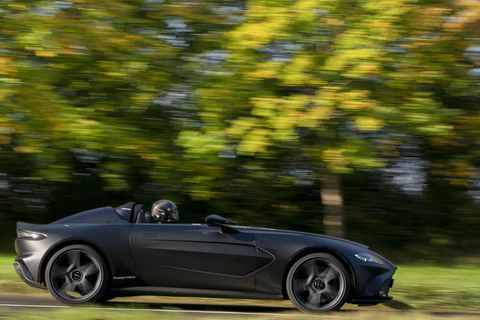 “No roof or (wind)screen, a big engine, low, with broad shoulders and exaggerated and emotional styling with twin humps and the spine separating the driver and passenger,” Nurnberger said at the car’s debut in March. “The light, low, rear end contrasts with the bold, enlarged grille, unique headlights and bonnet nostril at the front. The bonnet nostril we haven’t done in a very long time, but we’ve brought them back. It’s a neat trick visually to allow us to win some space for the V12. It creates this iconic looking vent.”

Making it a V12 Speedster is the mighty 700-hp 5.2-liter twin-turbo V12 mounted in front but behind the front axle. The all-alloy quad-cam, 48-valve engine is mated to a ZF eight-speed automatic transmission sending power to a limited slip diff driving the rear wheels. Aston says that setup is good for 0-60 in 3.5 seconds and a 186-mph top speed.

makes a stout 495. But we’re here to talk about the Aston Martin.

“For raw, driving thrills the V12 Speedster is unparalleled, the fully open element of the car adding a new dimension to the experience,” said Matt Becker, Aston Martin chief engineer. “It engages on every level, delivering a precise, involving driving experience, with agility and poise backed by abundant power from Aston Martin’s twin-turbo 5.2-litre V12. Driving doesn’t get any purer than this.”

With California’s governor recently announcing a ban on internal combustion, and with so much of the world turning toward electric cars, this magnificent Speedster might represent one of the last of the great V12 supercars. After this, it’s all green efficiency and clicks an whirs replacing the mighty roar of beautiful beasts like this. They’re taking orders now at your Aston Martin dealer. Just head down there and convince them you have $950,000.

Is this a great car or not? Tell us what you think in the comments section below

This Engineer Turned a Little Tikes Tuggy Sandbox Into a Real, Legally-Registered Boat