At the time of writing this review, the bike stands at 26315 km on the ODO.

BHPian Dhruv Shetty recently shared this with other enthusiasts. This is my ownership review of my Duke 390 (The Beast). I was never a bike person for a long time, the love was more of cars, in 2019 the love for bikes started with the Duke 390 1st gen. Search for the bike

In the year 2020, I decided to buy a bike, I had considered buying a new Duke 390, after some thought and consultation I decided to buy a used 1st gen 390 as it would be a better choice as I loved the nature and character of the 1st gen. So in July, the search began by looking through Olx, Team-bhp classifieds, Instagram, and others. Most of the results which showed up did not impress me, as they were shady, overpriced, too good to be true examples the good ones were already sold before I could strike a deal. By the end of July, I asked my close friend that I was looking for a used 390, and luckily he knew someone in his circle who was selling his Duke 390 and it was within the budget. So we decided to check the bike out on 2nd August.

On a bright afternoon of 2nd August, we both go to check the bike, arriving at the location we meet up with the owner and had a chat, he then led us to the bike, started inspecting the bike. After the inspection we both were sure that the bike’s overall condition was good, the ODO reading was 13700, the only aftermarket accessories were the Bosch horns, the other two accessories were the battery tender connecter and hazard flasher which he kept after I bought the bike.

Satisfied with the bike, checked the documents they were all clear. The owner mentioned that the clutch needs to be changed, that amount had been deducted, asking price for the bike was 1.2L as the owner was a known and good mutual friend, the price was brought down to 95k including the clutch job. Paid the token amount and took the bike to its new home, the remaining amount was paid the next week.

History of the bike

The history of the bike is a mystery, the first owner was a Parsi pilot who purchased it on 13 March 2014 and it was barely used till 2017, it clocked around 6km. The instrument panel had been changed somewhere around 2016, ODO reading on the instrument cluster and ECU is off by 2000 km. There is no service records of the bike in the system from 2014 to 2017. When the bike was bought by the second owner it was serviced at the SVC and all the records were there. The mystery part to the bike is that the chassis number has been changed for some reason by the first owner and the document for the change is there, so that turned out to be a relief and the transfer happened without a glitch. The engine is a 373cc signal cylinder pumping out 43 horses and 33NM of torque. It is a rev-happy motor and raw power silvery combined with a smooth gearbox. The bike is a bit unhappy under 3k RPM at 30 Kmph on 2nd gear combined with the heavy clutch. Past 3k it pulls effortlessly and once it hits its sweet spot 4.4k to 7k it becomes a different animal, it throws the rider back and wants to pop wheelies at almost every gear, in the same sweet spot it can be riding in a calm with smooth throttle inputs combined with the cable operated throttle, according to me it creates a direct connection to the rider and bike. False neutrals are rare and If it does happen it is due to not engaging the clutch properly or not rev-matching correctly. Neutral is easy to find just need to tap the gear lever gently. 1st to 2nd vice versa needs a little more force, the rest of the gear’s slots in nice and smooth. The downside of the engine nature is that in traffic a lot of engine heat is diverted to the leg and inner thigh area, which can get very uncomfortable the only plus side to heat is when it rains and the pants become wet, it can be used to it dry up.

The exhaust note is rattly, loud, heavy and bassy at idle, once on the move, it becomes smooth and has a sweet whine to it. When riding hard its tone becomes aggressive, during downshifting it has a mixture of whining and subtle pops.

The Bike has a 10L fuel tank out of which 2L is reserve.

On the highway the mileage it returns ranges from 24 Kmpl to 32 Kmpl and a range of 300 kms and in very rare cases it delivers 42 Kmpl depending on the road and speed its doing. The Trellis frame makes the bike feel nimble and handles almost any road conditions which are thrown at it, on long open highways it feels planted and inspires confidence while changing directions and attacking turns. Even riding on rough patches and slight off-roading it communicates in a decent manner with the rider. While riding along with a passenger, especially with a heavy person, there’s a lot more pressure on the hands while changing directions and taking U-turns. The extra weight increases the braking distance. All in all the bike is meant to be be solo as it performs much better.

The Duke 390 comes with Dual-channel ABS as standard, braking duty is done by 300 mm disc with four pot caliper in the front and 230 mm disc along with single pot caliper at the back. Without much drama, even during panic braking, it will hold its line and not lose control. ABS is more intrusive on the rear compared to the front. The bike is currently running on Michelin Road 5’s. It’s been in the bike for 5 months and 3000 kms and I’m impressed with the tyres.

The rider sits upright with a slight forward lean a comfortable hand leg placement, a decent rider triangle. Gripping the tank with knees is fairly easy and adding tank grips will make it more comfortable and will provide more confidence. The hands fall in place on the handlebar with ease and does not give any discomfort on the wrists and arms.

The stock mirrors of the first-gen Dukes are hopeless and barely provide any view of what’s happening behind you, shoulder checks are needed to make sure there aren’t any surprises waiting. I replaced the mirrors with the ADV 390 mirrors and provide a decent improvement over the old ones as the stalks are higher and wider compared to the old one.

Side stand is easy to operate and find, if the shoes has a nice horizontal groove, it can be used to slot in and engage the stand.

With the stiff front, soft rear, and 17-inch rims the ride quality can be harsh on rough, slightly bumpy roads, all these conditions make the ride feel uneasy and demotivating.

Once on a smooth road, the stiff suspension setup makes the ride pleasant, enjoyable and inspires confidence to ride the bike as it is supposed to be ridden.

The vibrations are present in the rev band from 1.8k -to 4.5k, which makes you feel that you are riding a single-cylinder engine, post 4.5k till 7k the vibrations reduces to a level where it is not felt much.

The NVH reacts to normal octane, speed and XP95 differently, on normal petrol the vibes and harshness are more and felt throughout the rev band. On XP95 is smooth.

The Duke 390 takes styling cues from the bigger Duke 690. Styling is a mix of edgy, bulky, edgy and aggressive design. There is nice body lines are flowing through the body panels merging with the lights and seat. The orange frame and wheels along with the decals, underbelly exhaust and piece of art swingarm, gives the bike a nice sporty and clean look. Fit and finish is ok, at some places the panels do not sit flush and there some squeaks and vibration sounds at low speeds. The paint has a nice deep black gloss and blue metallic flakes in it, which is present only in the black color Dukes. The downside is that the paint is prone to scratches.

The switchgear layout is a basic Bajaj pulsar layout with backlit buttons the only difference is that the KTM ones are white in color and Bajaj ones are in blue. The switches are easy to find and operate. Instrument cluster is a nice orange backlit color and displays a good amount of information like distance to empty, kilometer’s left for next service, average time and speed, mileage and more. It includes two trip meters l and a clock which is a pain to set up. If any any problems are detected in the bike it displays it. Readability in normal and night riding is not a problem, but if ridden on a sunny day it becomes difficult to read what’s goin on. 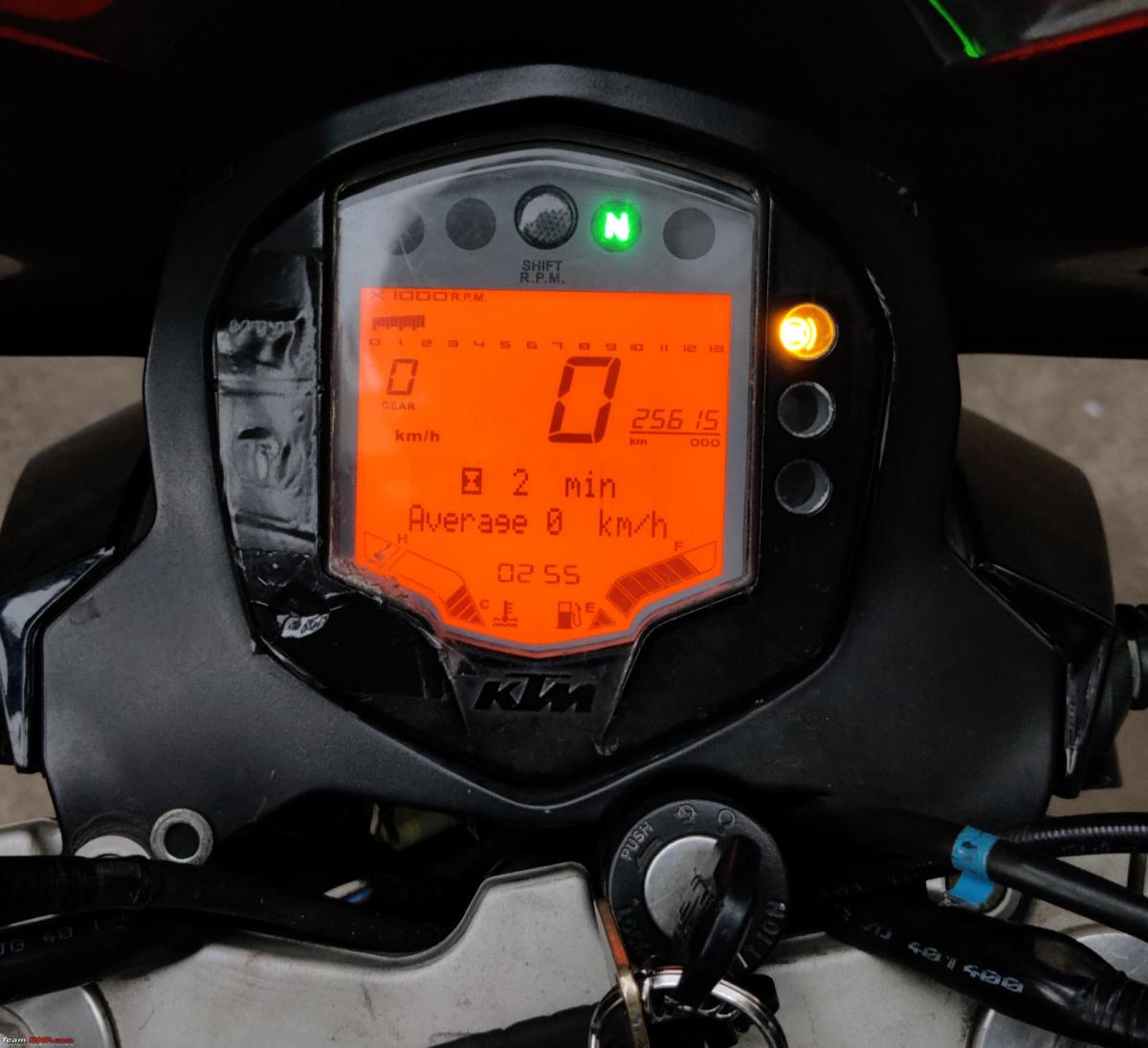 The main focus on the instrument cluster is the speed then the gear position and R.P.M

At the start of purchase it had been decided that it will be my daily to office which is 20km for 5 days and weekend rides, the bike used to clock close to 1000 kms a month. Now with the current rising petrol prices it is used only on weekend breakfast ride or late night/early morning city rides.

Lighting is handled by a LED setup except the headlight. The indicators and taillight unit are nice and bright, the license plate hlder light throws a nice strip of light on the road below. Headlight throw is adequate and does not inspire confidence at night as it barely illuminates the road ahead.

In the initial ownership period the Front brake disc was changed as it was bent along with bleeding the system, new brake pads and new axle and bolt. Later on the ABS pump had failed so got it replaced along with got brake pads upgraded to sintered pads and fluid to 5.1. Recently changed the master cylinder, the result is now better feedback and bite. Cost: 30k

At the time of purchase the bike came with Metzeler M5 Sportec, 7 year old in the front and 4 year old one in the back, used this setup for 8 months. Later on got the front changed to Apollo H1. In January 2022 got a Michelin Road 5’s put on the bike.

Cost:21k (including the front Apollo)

As the bike was 8 years old and had some running, it started developing cracks.

The left side engine hanger was split into two. Got it replaced as a pair.

The forks had never been serviced in it’s life, so got it serviced by changing the seals, fresh oil and the oil used was liqui Moly.

Total: I have plonked alot of money on the bike

At the time of writing this review, the bike stands at 26315 KM’s on the ODO. Here the bike chilling with the Duke which taught me to ride a bike and fall in loove with them.