I had never ridden any bike apart from my HF100 before this but I was familiar with the gear pattern of a Yezdi. The way it cornered was like nothing else.

BHPian MVM recently shared this with other enthusiasts.

Any vintage artefact has an irresistible charm of its own. My love for vintage bikes helped me find a kind old man who graciously allowed me to ride his pride and joy. A man who had owned this bike for the last 44 Years.

I had expressed my love for Yezdis previously on Team BHP here.

After realising that a Yezdi is not the best first bike especially when I wanted my first bike to give me a trouble free experience I decided to purchase a Hero HF100. But the Yezdi bug never died. The sight of a Yezdi always excited me. But I decided to stay an admirer from afar. Believe me when I say that I love my HF 100 very much but it is no Yezdi. Around 2 weeks back I was speaking to one of our family friends when he revealed to me that he had requested his uncle to allow me to ride his Yezdi. I was surprised and overjoyed at the same time. I was surprised that a man who had owned and loved his bike for the last 44 years was allowing a stranger to ride it. That is something I would’ve been reluctant to do if I was in his place.

After going to uncle’s house we began chatting about his experiences with the bike and discussed all the minute details. He told me that he had done over 1lakh trouble free kilometres on the Yezdi. Uncle reminisced about how he used to get the points tuned and go on rallies with the bike. The bike was bone stock except for a respray and a new headlight housing. Uncle even had the original owner’s manual for the Yezdi. Uncle’s wife loved the bike equally and their house was peppered with photos of the bike. The Yezdi was a part of their life. Uncle then took off the covers and there she was. 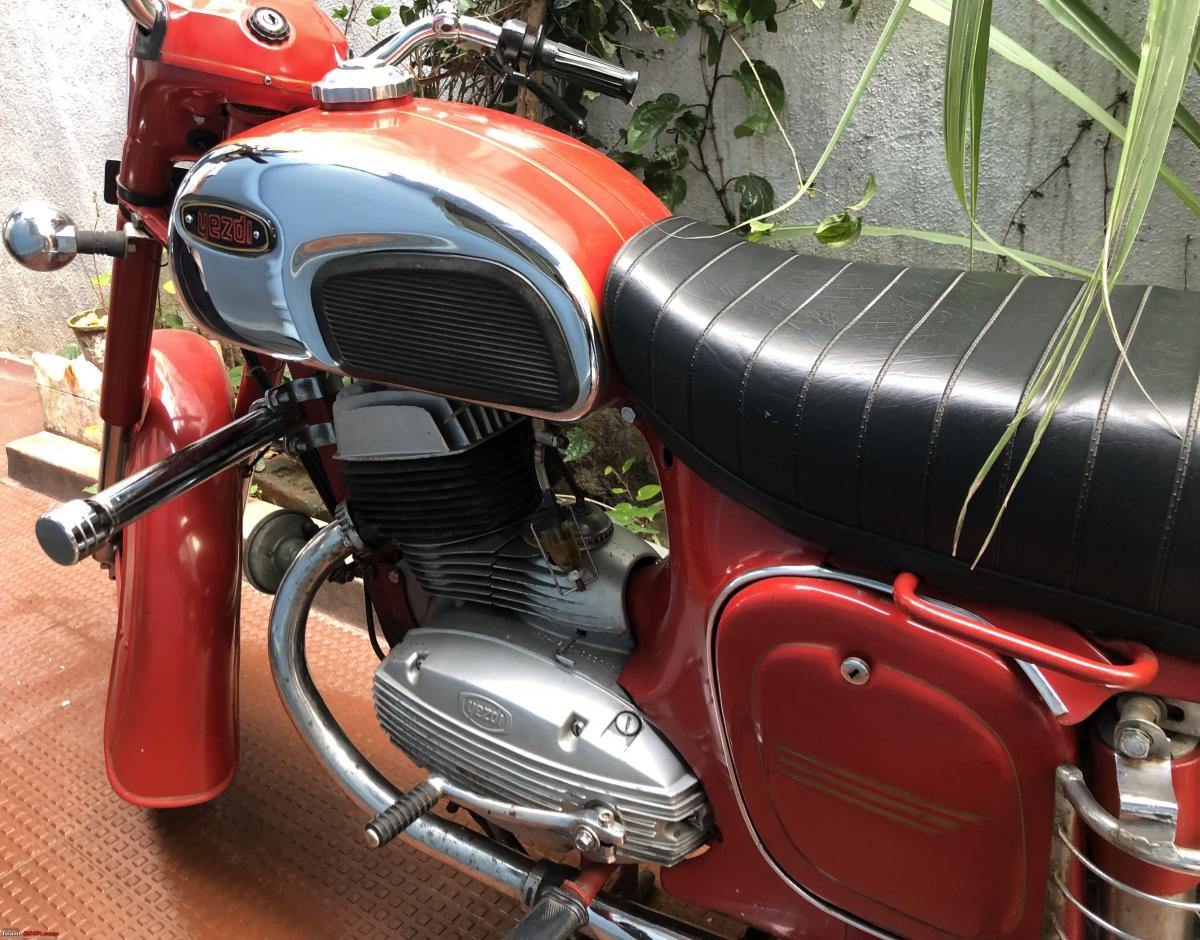 Uncle then proceeded to tickle the carburettor a few times, pumped thrice and gave one hard kick which released the symphony into this world.

Uncle then asked me if I wanted to give it a ride. I had come for this very reason but was apprehensive to ride it. I requested uncle if I could start on my own. Starting the bike on my own gave me a sliver of confidence to ride it.

What followed can only be described as Happiness. I took the bike for a 1.5km ride and it was a breeze to ride. I had never ridden any bike apart from my HF100 before this but I was familiar with the gear pattern of a Yezdi. The way it cornered was like nothing else. I didn’t feel any of the weight. The other aspect of riding a Yezdi is the looks you get from people on the road. It really felt like nothing else. I didn’t know where to go nor did I know where I was going, I just wanted to keep riding the Yezdi. Uncle spotted the gleam in my eyes after the ride and told me that he’ll let the people he knows to look around for a good Yezdi and told me to enjoy life when I still have the chance.

I know that I’ll buy a Yezdi one day and that day may come in a few months or a few years but I’ll buy one for sure.

Here’s what BHPian V.Narayan had to say on the matter:

Timeless. I loved the smell of the exhaust with its unburnt gases. That sound was for me the sound of insane jealousy. In my MBA days only one student in both years together had a bike and it was a Yezdi with its classic Czech engineering. In those days it was uncommon for a mere student to own anything beyond a pedal bicycle. Inability to shift to 4-stroke engines to comply with tighter exhaust pollution rules and fuel efficient competition in part contributed to the demise of this company in 1996

Here’s what BHPian anjan_c2007 had to say on the matter:

Thanks for the thread to discuss our Jawa and Yezdi memories and good to read about your encounter with a neat example.

Like Henry Ford (1863- 1947) who documented that he made the “Any customer can have a car painted any colour that he wants so long as it is black” statement during a meeting in 1909 for the Model T, perhaps the Irani’s could have uttered similar words for the Jawa/Yezdi. The Irani’s deviated but rarely, offering bottle green, light grey and maroon shades.

The bike is very cool with its rider, who just gets swayed away with the splendid machine as the OP says. It’s 129 Kg kerb weight can be sensed only while manually parking or handling it. I had a chance to drive a 1964 Jawa and a 1974 Yezdi. I had newly learnt driving a scooter, but these two owners were quite magnanimous to allow me drive these. The uneven road surfaces could be travelled with better ease as compared to the scooters.

As a child, I would fiddle with the home visitor’s machines. The scooters were cool as the seats could be reached to climb upon with ease and get seated there . There were quite a few of a scooter’s components that children could fiddle and play with the best being the switchgear. But the Jawa/Yezdi seats were too difficult to climb. And it’s switch gears were very few. Below the petrol tank, other than the more visible engine block, everything had aluminium covers. Hence, arrival of a visitor on such a bike would be a killjoy for me and friends during childhood.

But it was always available readily, when most scooters had 10-15 year waiting lists. Everyone wanted to become a scooterist and few opted to become bikers.