Caught up with the bus and made him stop. The driver and the conductor refused to accept their mistake feigning ignorance that he was unaware of his bus hitting something.

BHPian skanchan95 recently shared this with other enthusiasts.

The car met with two unfortunate accidents on consecutive days.

One of those infamous Mangalore bus drivers brushed the car while trying beat a cop’s stop signal at the Baikampady Industrial Area Junction. I slowed down, partly because on seeing the crossing traffic waiting ahead, I was expecting the cop to stop and partly because I was expecting some impatient two wheeler to dart across. To beat them both, the bus driver increased is speed and changed lanes without checking his ORVM, resulting in the car getting hit with a loud thud. I feared there would be a big dent on the bumper and severe damage on the bumper( which turned out to be much less after looking).

No matter how defensively you drive, no matter how much caution you exercise on the roads, you will always have suicidal and reckless maniacs like these bus drivers who show no respect to fellow motorists and pedestrians!!

Caught up with the bus and made him stop. The driver and the conductor refused to accept their mistake feigning ignorance that he was unaware of his bus hitting something. I showed them the scratches and yellow paint that their bus had transferred on the fender and the bumper. Most importantly, the dashcam footage was irrefutable proof of their rash driving and that the bus indeed had hit the car. They started apologizing profusely and asked to let it go as their boss would throw them out of their jobs if I created a scene. Near MCF, Three dogs darted across the highway. There was nothing I could do to stop in time or avoid the dogs. The first two were lucky but the third got hit by the car and did not survive, which was heartbreaking for me. Opened the bonnet to see if there was any damage in the engine bay and underneath or if any fluids were leaking. Other than the bumper, nothing seemed to be visibly damaged. The car was running fine and A/C was working.

Spoke to United Toyota to see if I could drive straight to their workshop and drop the car for repairs. They said their Bodyshop is full and it could take 7-10 days for the car to be repaired and quoted Rs 9000 odd for only the bumper replacement(including painting & labour charges) – The fender repair charges would be extra.

I then checked withy Mr Sanjay Set of The Pitstop Carz Spa if he could accept the car for repairs. Drove straight to his facility in Mannegudda, Mangalore where he said the bumper could possibly be repaired but it would be better to replace it.

He checked with both Toyota & Maruti workshops for the cost of the bumper. Maruti quoted 2550(delivery – immediate) & Toyota 2705 (delivery – two days later). He ordered the bumper from Maruti. I also asked him to check & damage on the fender and repair it. He said the paint could be scrubbed off, but there was light dent on the wheel arch, which was visible when viewed at a certain angle, at the junction of the fender and the bumper, paint had chipped off which would lead to corrosion later. As the fender was going to be repainted, I asked him to repaint the left side of the rear bumper ( which had a big ugly scratch thanks to a reckless biker. Also chose to get the paint protection/refinement coating done.

On Monday, I was informed that the car was ready. As I was busy that day, I picked up the car the next day: 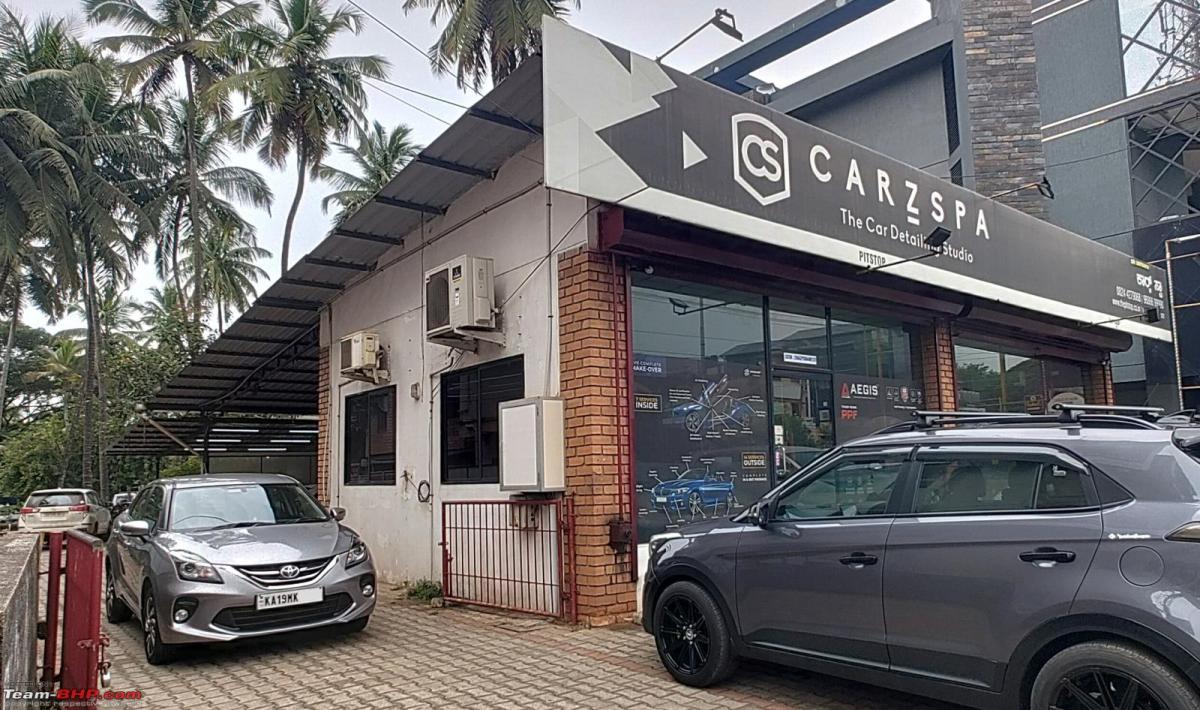 The job done was simply outstanding. The paint work was almost as good as factory finish – No paint mismatch or haziness. The pictures speak for themselves how good a job was done by Mr Sanjay Shet and his crew at Carz Spa, Mannegudda, Mangalore. Having got my old Figo and i20 repaint work done from him earlier, I can confidently say that he is probably the best in Mangalore and would recommend him highly to anyone in Mangalore who wish to get a paint job done. What Is This Bizarre Mid-Engine BMW 8 Series Prototype For?