The Malaysian Institute for Road Safety Research (MIROS) held a ground breaking ceremony today for its upcoming Technology Test Track (MT3) located in Sepang, with the aim of spearheading the development of safer vehicles in the Asean region, according to a statement by transport minister Datuk Seri Wee Ka Siong.

The establishment of a centre of excellence for active and passive safety research on vehicles is a key area in the Malaysian Road Safety Plan 2022-2030, and the development of the MT3 test facility is hoped to attract private parties and other agencies to work with MIROS in order for vehicles to meet safety specifications, said the transport minister in his speech at the ground-breaking ceremony, The Star reported.

Located near the Sepang International Circuit, the MT3 is comprised of a one km-long facility, and it will be a pioneer for various tests for active and passive safety systems on vehicles to be sold in Malaysia as well as in the Southeast Asia region.

According to the illustrations in pictures from the ministry of transport, systems that will be tested at the upcoming MT3 facility include blind spot detection, autonomous emergency braking (AEB), motorcycle detection, intelligent rear view mirror, automatic high beam, ABS and ESC as well as tests for brake performance, tyres and wheels, speedometer and steering equipment. 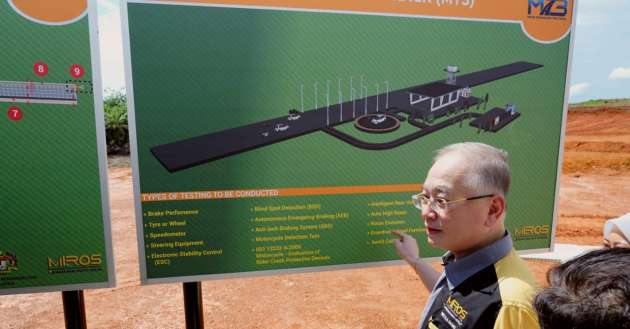 Construction of the test facility will use MIROS’ own funds, and its existing headquarters in Kajang will be relocated to the same site as the upcoming test facility through government funding, next to a new vehicle crash test facility, according to information from a MIROS presentation last year.

In 2020, MIROS conducted development tests for AEB systems in preparation for the latest Asean NCAP protocol which took effect January 2021.