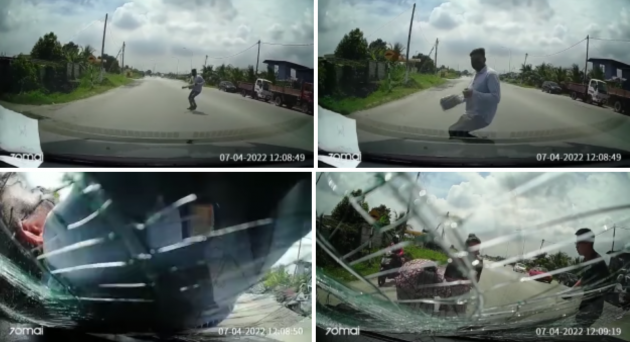 Remember the case in Klang earlier this month where a man charged towards a car and then launched himself into the vehicle’s bonnet and windscreen? Seconds after, a couple of people appear on the scene, including two women trying to assist the “victim”. The extortion attempt failed when it was all recorded on the car’s dashcam.

That man has since been apprehended and was charged in court for acting in a manner that endangers life and the personal safety of others. According to FMT, Soe Mg Mg, a 25-year-old Myanmar national, was charged at the Klang magistrates’ court under Section 336 of the Penal Code for committing the offence at Jalan Goh Hock Huat in Klang on April 7.

Based on the charge sheet sighted by the news portal, the offence is punishable with up to three months jail or a fine of up to RM500, or both, upon conviction.

Soe was also charged under Section 6(1)(c) of the Immigration Act 1959 for not possessing valid travel documents to enter Malaysia. However, the accused was unable to enter a plea as he could not understand the charges read to him in Bahasa Melayu. Magistrate Amirul Asyraf Abdul Rasid fixed June 3 for the next mention to enable the court to have an interpreter read the charges.

Unfortunately, there’s no guarantee that such scam attempts will not happen again. The only thing that drivers can do is to have a dashcam, so get one if you haven’t already done so. Indeed, Soe and his accomplices promptly left the “accident scene” after being told by the driver that the whole sequence was recorded.

And it’s not just extortion tricks like this that we need to worry about, because car drivers will never have the benefit of doubt against “smaller” road users such as motorcycles, cyclists and pedestrians. You’ll need proof, and a dashcam provides that, so get one if you haven’t already done so.

Tesla recalls over 8 lakh electric cars in the USA