Home » Auto News » Is the use of sun films / safety glazing on car windows now legal?

The current standard is that even if the glazing material is glued, at least 70% of the light must pass through the front & rear glasses & at least 50% through the side glasses.

It seems that there is some confusion regarding the legality of using sun films / safety glazing on car windows in the present day & age. Members of the forum have been having quite a discussion on the same.

BHPian CrAzY dRiVeR recently shared this with other enthusiasts.

The source article is in Malayalam. So providing the English abstract of only the relevant portions. Please use Google Translate for reading the full article.

“However, the law underlying the court order and the BIS norms (IS 2553) which are the technical basis for it have been amended. In Rule 100 of the Motor Vehicle Act, the word ‘safety glass’ was changed to ‘safety glass’ and ‘safety glazing’. The amendment was announced in July 2020.

The current standard is that even if the glazing material is glued, at least 70 percent of the light must pass through the front and rear glasses and at least 50 percent through the side glass. The pasting of ‘glazing plastics’ that meet this standard is not illegal under the new provision. The BIS has strict guidelines for these.”

Here’s what BHPian shibulijack had to say about the matter:

Interesting. I’m planning to get 3M CR70 for my car and I was skeptical only because of the legal implications. Are there any official government documents regarding the same? It’d be great if we can reference some links when the traffic cops ask about the sun film.

Here’s what BHPian jalex77 had to say about the matter:

Tried hunting for this amendment notification from government sources but couldn’t see any.

But here’s one article in English on a law firm’s web portal about it.

Here’s another report from Money control.

And here’s the definition for ‘safety glazing material’ in American law.

Here’s what BHPian tilt had to say about the matter:

I would trust the law firm’s take on this rather than journalists’.

The interpretation still pertains to the making or manufacturing of the vehicle glass and nothing about modifying after purchase by the individual owners.

So, I would interpret this to mean that we as owners are still not legally permitted to stick sun-control films on the glass.

Here’s what BHPian thanixravindran had to say about the matter:

Here is the link to the amendment that the articles refer to.

Fourth point pertains for the owners that mandates them to maintain the VLT levels. Though I don’t have the original rule, I believe this is to ensure that heavy vehicles listed in the amendment to have safety glass or safety glazing and simply not remove them or fail to replace them.

It also can be used to fine any vehicles if the glass is dirty or films and VLT falls below the level prescribed by law.

I think no modifications are legally allowed in vehicles without endorsement in RC. So can any lawyer tell whether one can add a sun film and still prove the VLT is as per limits and this can be endorsed by in RC by RTO to become legally compliant? 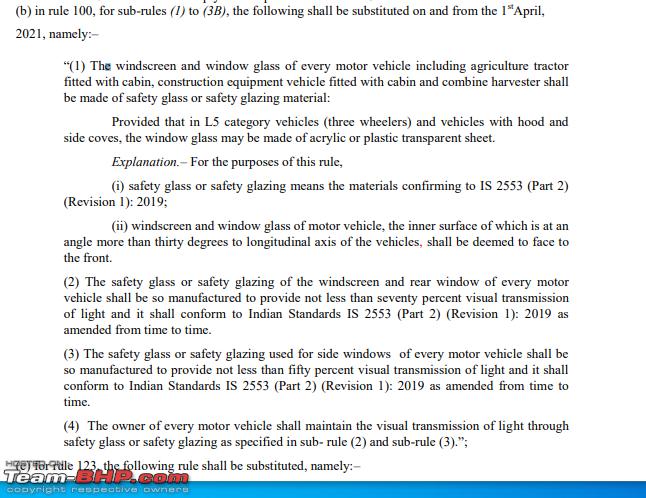 Here’s what BHPian Bibendum90949 had to say about the matter:

This has created so much confusion among motorists. It would lead to at least some car owners losing money. To make matters worse, some self-proclaimed social media influencers and YouTubers have jumped on the bandwagon.

As things stand, sun films on car windows and windshields are illegal. Period. A video (in Malayalam though) on the subject by a retired MVI. He explains it clearly.

The amendment pertains to the manufacturing of automotive glasses.

The below comment sums up the matter quite clearly. 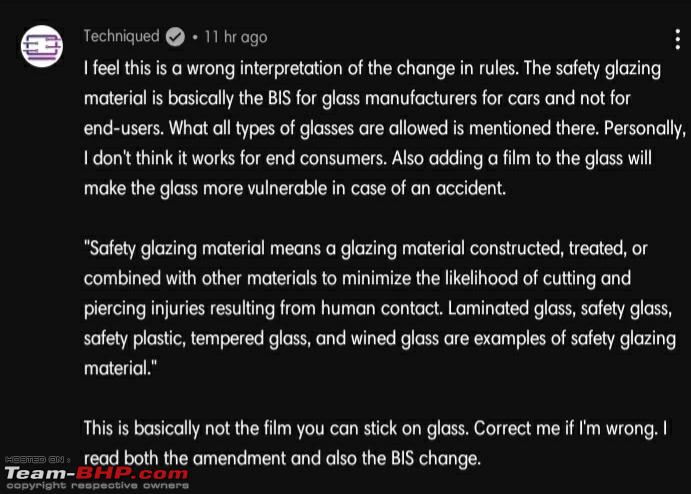 Here’s what BHPian sarathlal had to say about the matter:

This has gotten more traction and attention wherein the car accessories dealers in Kerala are urging the State government to issue an internal circular to make things clear and allow the general public to take advantage of the situation.

Here’s what BHPian SPIKE ARRESTOR had to say about the matter:

In my opinion, pasting any such film is still illegal, irrespective of the fact, that the pasted film may comply to the VLT norm. We need to understand that VLT is one of the specifications that the windshield should comply with, there are other aspects as well – e.g. how the glass behaves in case of a crash.

Before any such product is brought into the market by the OEM / Supplier, it could be reasonably presumed, that they have done all necessary tests needed for compliance to CMVR.