Each such ride is a learning experience, both for the organizers and the participants.

BHPian neil.jericho recently shared this with other enthusiasts.

As part of its Independence Day celebrations, Suzuki organized a ride to Munroe Island in Kollam. The ride was exclusively for owners of their 250cc motorcycles. This Independence Day ride was jointly organized by the Suzuki teams in Central Kerala and South Kerala. In all, there were around 20 riders from Cochin and another 20 riders from the southern districts. When I was first told about the ride, my immediate reaction was that had the Suzuki team organized it on the 14th (Sunday) and planned for a flag hoisting on the 15th (Monday), more owners would have been able to join the event. Since many riders had to report back to work on Tuesday morning, the attendance was less than what it could have been. The Suzuki team has accepted this feedback from riders and will take these practical matters into consideration before they organize their next event. The original plan was for the Cochin team to depart from one of the Suzuki showrooms by 11 AM. After having lunch in Allepey, we would then proceed to the resort. The distance to be covered was 150 kilometers.

At the first showroom, an Independence Day-themed cake was cut and distributed. Some quick do’s and dont’s were listed by the organizers. From there, the group went to a nearby petrol pump where everyone’s bike was topped up with fuel. One interesting aspect of Suzuki’s ride events is that the company pays for the petrol that riders use on these trips. In this case, everyone’s bike was filled up and the Suzuki team paid for the combined fuel bill. As a best practice, I always go for a ride with the bike fully fuelled up and the tire pressures checked. Since I was the only one who came with a full tank of petrol, the Suzuki team said that they will transfer Rs 800 to me. Riders all set to leave

Next, we went to the second Suzuki showroom in Cochin, where we had 4 more riders join us. The total count including the showroom representatives, Suzuki officials and riders was 18 riders. I was in charge of leading 5 Gixxer and Gixxer SF 250 riders. A showroom manager was in charge of leading the other 11 VStrom 250 riders. More than half the riders had never participated in a group ride before. It was nice to see so many Suzuki owners taking their first steps into this slice of the motorcycling world. After a proper introduction to the rules of group riding, we departed from the showroom.

Along the way, one of the Gixxer SF 250 bikes that was a dealer test bike, kept giving trouble. We stopped for lunch at the Cassia restaurant in Allepey. Being Independence Day, many of the popular restaurants were closed. Thankfully, we had called ahead and booked a huge table. Despite giving them our order before we left from Cochin, we lost a lot of time waiting for our food. As for the problematic bike, it was decided to leave it at the restaurant and pick it up on the way back. 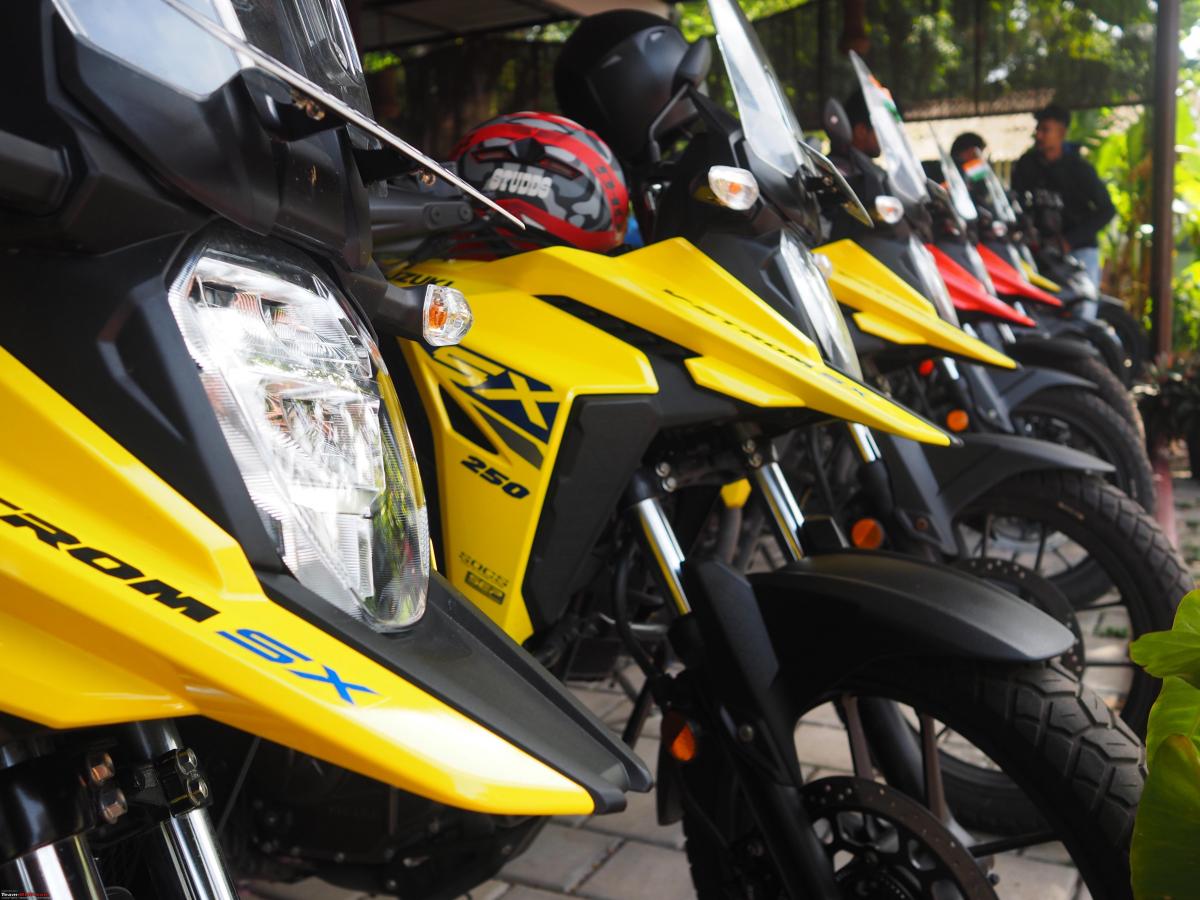 Some of the bikes in the parking lot

Our next stop was at a predetermined restaurant in Kayamkulam, which was 50 kilometers away. Due to some miscommunication, half the group ended up at the Suzuki showroom in Kayamkulam, while the rest of us patiently waited at the restaurant. These things are bound to happen when you are on a large group ride. It was already 5 PM when we were set to leave from there. Our group was still 42 kilometers away from the resort. I wanted to reach before sunset and traffic picked up. I wasn’t aware of the plan to visit the Suzuki showroom in Kollam for a cake-cutting ceremony, before going to the resort. Hence, I led the team of the Gixxer and SF 250 riders straight to Munroe Island. Half of the VStrom 250 bikes parked at the restaurant… … as are the Gixxer / SF 250 bikes, while we wait for the others who were taken to the Suzuki showroom

Meanwhile, at the Kayamkulam Suzuki dealership, the other half of the Cochin VStrom 250 team, synced up with the Suzuki riders from the south circle. An Independence Day-themed cake was cut. The remaining VStrom 250 owners who were with us joined them somewhere on the highway. Together, they all went to the Suzuki dealership in Kollam. After another cake was cut at the Kollam dealership, the entire team left for the resort. Later, I got to know that the South circle riders had actually left from Trivandrum early in the morning. Along the way, they had stopped at multiple Suzuki dealerships. Basically, a lot of Independence Day-themed cakes were cut during the course of their full-day ride. These 3 pictures are courtesy of the invited photographer.

Back to my ride, I was taken aback by the terrain and strangely winding road that led to Munroe Island. Since it is a waterfront area, I expected the terrain to be flat, like the rest of coastal Kerala. Out of nowhere, we found a steeply ascending road in front of us with a lot of houses on either side of it. Instead of u-turns or hairpin bends, there were right-angled turns everywhere. With houses surrounding us. While we were ascending sharply. This clearly isn’t what you expect to find in such terrain!

Fortunately, there was no traffic on the road. Neither were there any people in sight. Hypothetically speaking, our small group might have gone hell for leather in this steep ascent and the subsequent descent. Had we done so (I’m not suggesting that we did!), it would have appeared to be a swarm of Moto3 riders on an open-course race. I barely touched the brakes in this section while effortlessly tipping the bike over from side to side. The other riders were hot on my tail, the whole time. This was undoubtedly the most fun that we had, all day! Hypothetically speaking, that is.

When we were a kilometer away from the resort, our group pulled over to take a breather. Everyone was buzzing with boundless energy and thankful that we were able to ride through this section with daylight on our side. 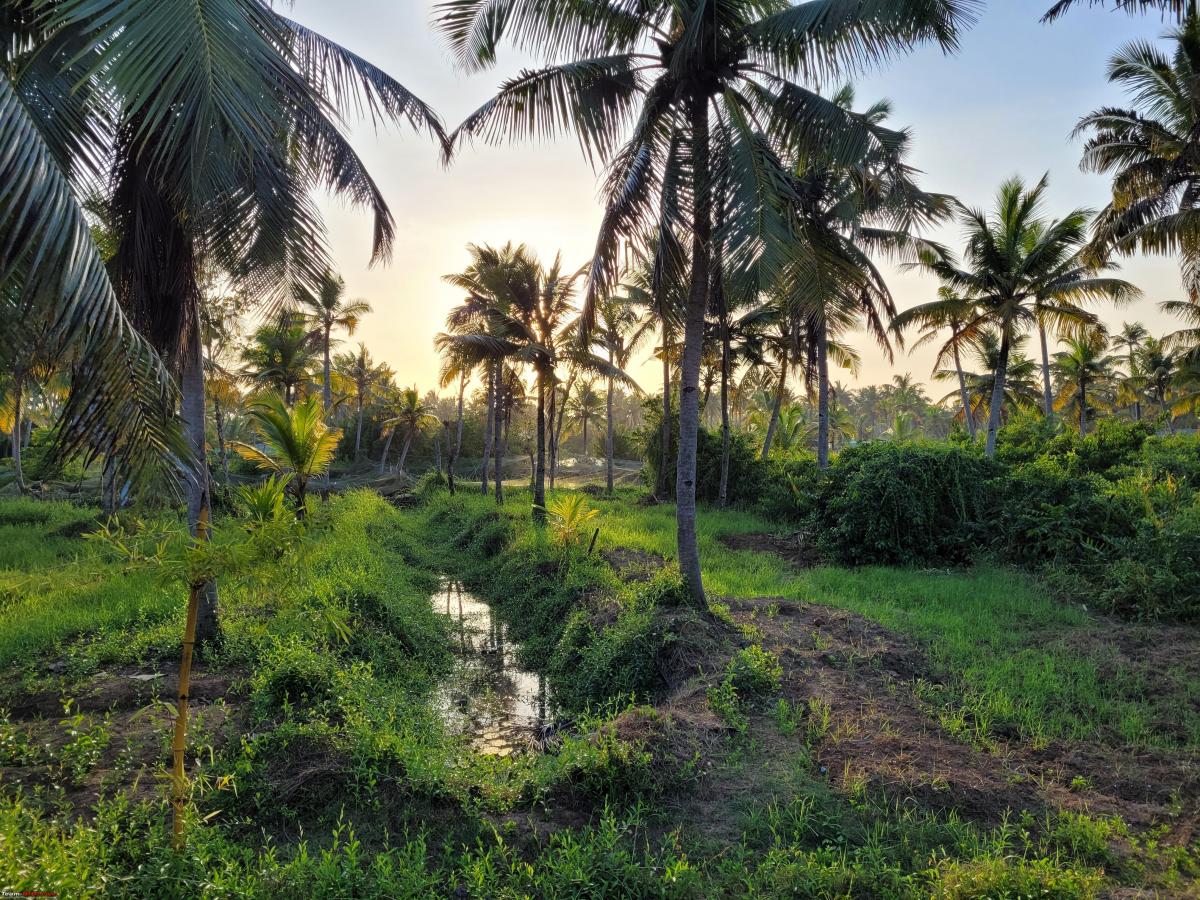 Pictures do not do this justice!

Once we got to the resort, my fellow riders dumped their bags and went back towards a large public viewpoint, to thoroughly enjoy the sunset. The remaining 30+ riders arrived after 7 PM. Unfortunately, they didn’t get to enjoy the Isle of Munroe ride, as we did. Meanwhile, the rest of the crew was on its way Still on the way The resort had a large pond in it and presented some splendid views of the surrounding water channels. However, it wasn’t very well maintained. The staff clearly didn’t have any training, either. For an overnight stay, you could consider this resort. If you want a premium tourist experience, you should look elsewhere. For the purpose of this trip, the resort was perfect. The Suzuki team did a good job in selecting this resort, even if it couldn’t accommodate all our riders. Some people were hosted in nearby properties.

Later in the evening, I enjoyed meeting so many other motorcycle enthusiasts who belong to the Suzuki family. While our perspectives were sometimes different, it was fascinating to learn about their viewpoints and experiences. These are the quality conversations which make such rides worthwhile. Thank goodness nobody came with a Metallic Triton Blue SF 250! Time to call it a night

The next morning, some riders left before sunrise because they had to get to work, on time. More than a third of them departed before breakfast was served. It’s a shame because the resort offered a stunning natural feel. The staff at the hotel were asked to serve breakfast only at 8.30 but even that was delayed. As soon as I got done with breakfast, I strapped on my tail bag and left. The large pond inside the resort. Several riders enjoyed boating in it. A riot of colours Hey, where did everybody go??

Not wanting to risk life or limb while riding to and through Allepey, I took the safe MC road until Cherthala. There, I cut across to the main highway and enjoyed the rest of the solo ride back to Cochin. Overall, this was a fun and enriching event that was organized by Team Suzuki. Being their first big ride, there were some areas for improvement. That is understandable and only to be expected. More so, when so many riders were new to group riding. Each such ride is a learning experience, both for the organizers and the participants. At the same time, these rides have an exponential effect on building the riding community with Suzuki’s motorbike owners. Already, many of us are in touch with each other through WhatsApp, where we share our experiences with others. A big thumbs up to the Suzuki team that organized this Independence Day ride. I hope that this is only the first of many Suzuki events in the coming months.

The Hyundai Ioniq 6 Looks Like A Cross Between A 1930s Streamliner, Saab And A Porsche 911