There were two massive demonstration areas for a huge number of RC cars and trucks. Some of these have truly amazing details and full functioning everything.

We have quite a few model (building) enthusiasts on the forum so I thought I would share some images from my visit last Saturday to a nice model building exhibition. Here in the Netherlands there are dozens and dozens of these sort of exhibition. For instance, there is a monthly mini-car-model fair. There are lots of rail model fairs and exhibitions. Etc. Etc.

This one is organised by the NVM (Nederlandse Vereninging Modelbouw, Dutch society for model building). They cover just about every aspect of model building, any object, any scale, any material. I do prefer to see a bit of everything, rather than only model trains, or planes or RC boats. Admittedly, the model trains tend to dominate these sort of exhibitions. Model Railway is still a huge hobby for many Dutch men. Maybe the odd few women, oh and they are all my age, if not quite a bit older. The way they set up these exhibition is according to very successful format. It is a mix of vendors and clubs. The clubs pay very little for their participation. You can just rent a table if you like. The cost of the exhibition is covered by the (commercial) vendors and a small entrance fee for all visitors.

Although there are still some specialised model build shops in the Netherlands and Germany, a lot of this has moved to the internet. So it is a lot of these internet shops that are out here showing their goodies for real!

I was looking forward to this visit. I had agreed to meet up with a few friends from my Dutch steam engine forum. One them was exiting two of his locomotives too. And I guarantee you, you will be impressed!

So on a frosty and very misty Saturday morning I pointed the star on the hood of my Mercedes W123 north and drove up to Houten. What should have been a 25 minute drive, became almost 45 minutes because of heavy fog. But I got there in the end.

As this is a car forum, I popped into the neighboring building from the Exhibition Centre. Which happens to be the one and only official Lotus Centre in the Netherlands. Always nice to have a quick look around. As luck would have it, they had the brand spanking new Lotus Eletre on display. The very first fully electric Lotus. Prices are from euro 100.000 and up. (INR 9000000). Place your order now and you might get delivery late summer 2023: 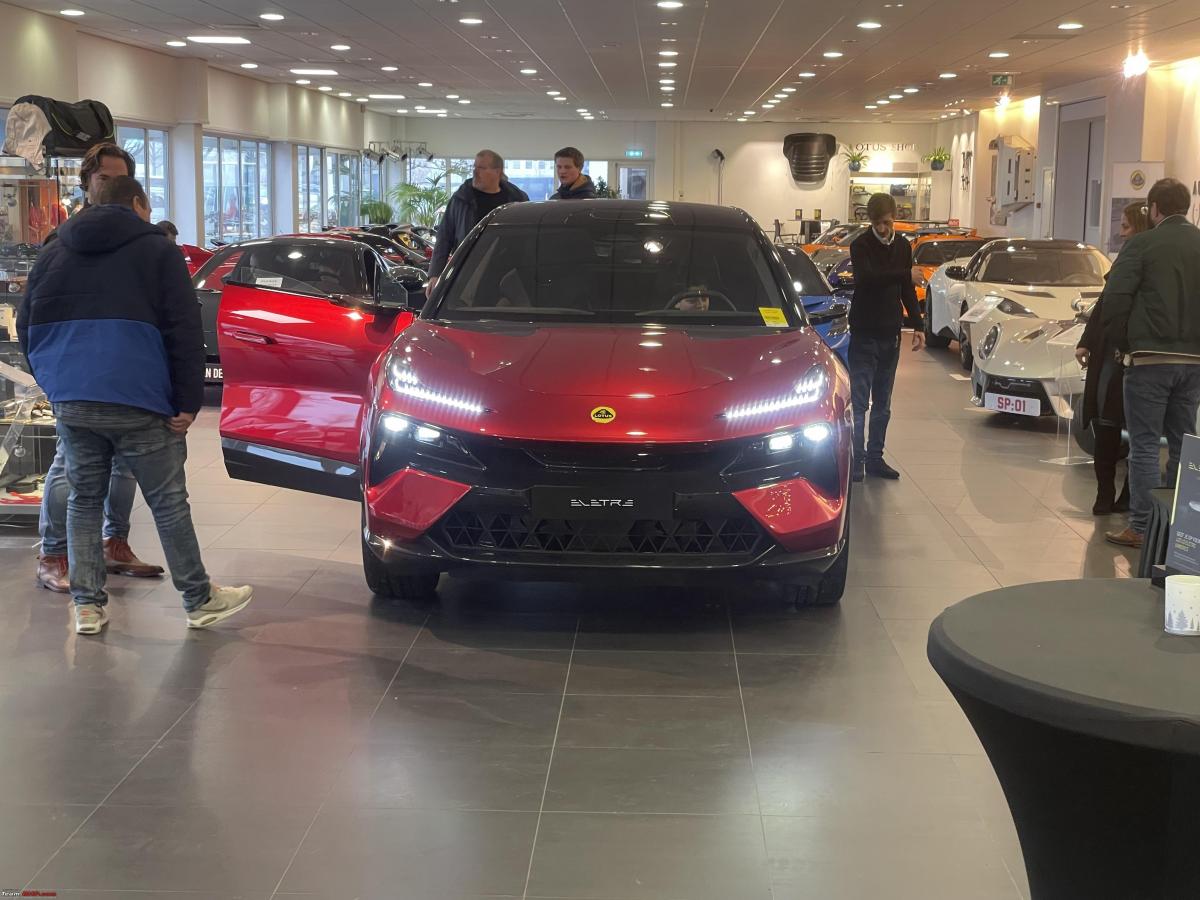 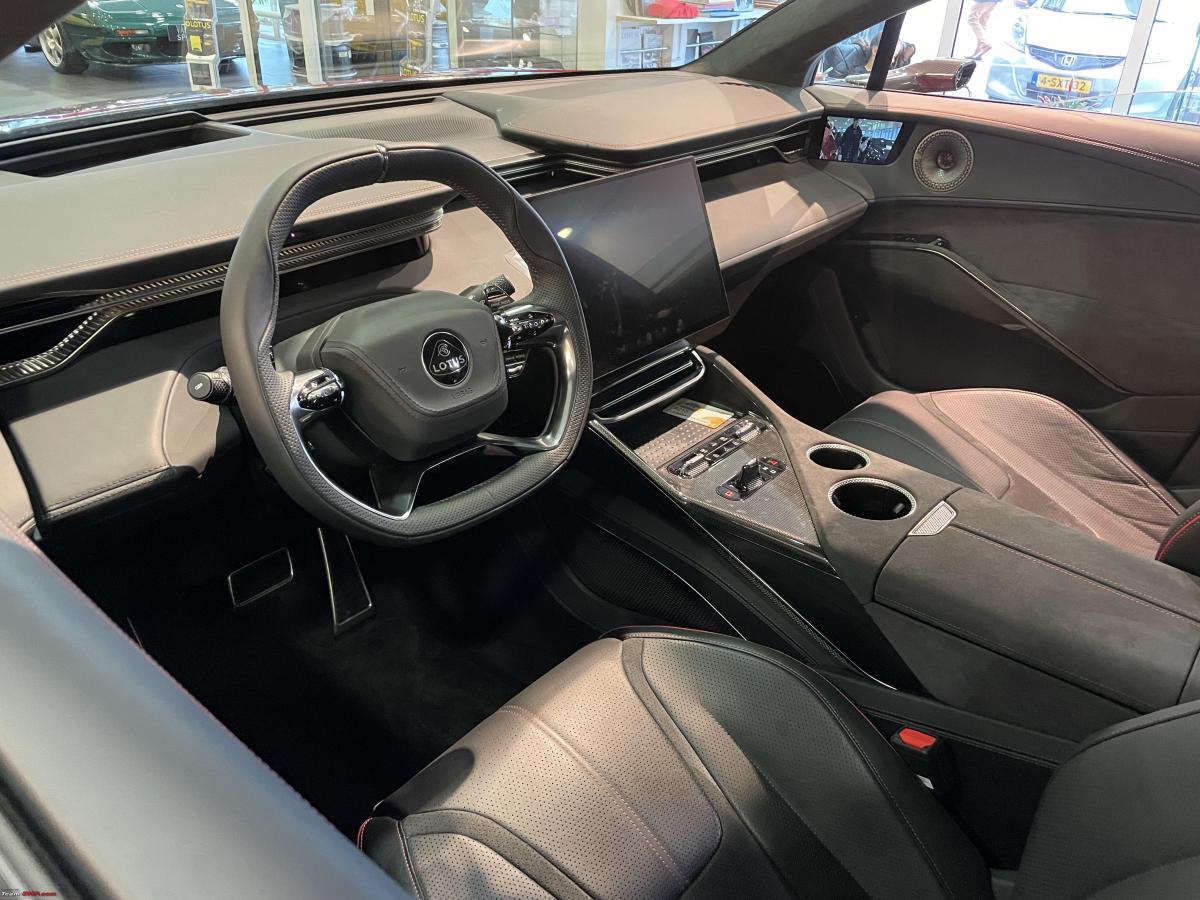 Those of you whom have followed some of my posts over the last years, might have picket up I am, by and large, not a huge fan of any new car. There are a few cars I would really like new, but not many. Yes, they are probably more comfortable, more economic, more safe and what have you, but they all look about the same.

When it comes to this new Lotus, make up your own mind. Just remember Colin Chapman, the founder of Lotus. His mantra has always been “Simplify and add lightness”. He must be turning in his grave!!

Luckily they still had some proper Lotus cars as well, a whole showroom full of them!! The iconic Lotus Europe. I stood next to it, it is just unbelievable how low this car is!! Behind it a very nice Austin Healy: Finally, also on display and for sale, a brand new Caterham Seven. Only Euro 69.000 (INR 6000000). For that you dont get power steering, you dont get a radio, you don’t get air-conditioning, you don’t even get a roof over you head. What you get is an absolute pocket rocket which is all about simplicity and lightness. These cars are an absolute hoot to drive!! Caterham bought the right to produce the Lotus 7 under their own brand name. They have managed to improve the car compared to the original Lotus 7 quite a bit.

Anyway, time to go and see some models next door in the Houten exhibition centre.

There were two of these massive demonstration areas, for a huge number of RC cars and trucks. Some of these have truly amazing details and full functioning everything: I took quite a few images, but this video shows it much better.

Did I mention that this was a model exhibition where anything goes, be it the object and or the material, to name just a few?

So here is a Dutch dredger paper model. Yes, you can get just about anything as a paper kit model. Be it a Dutch windmill, a T-ford or a vessel. AT the back you can see various wooden models too: I liked this model. It is actually one of the most often build boat models in the Netherlands, together with the oceaan going tug Rotterdam. This is the anchor handling Tug SmitLloyd 112. I did two tours on the real 112. One in the North Sea and one tour near Venezuela. These were, in their time, fantastic ships, incredibly seaworthy. With two Stork Werkspoor TM410 medium speed diesel and Lips controllable pitch propellors they were the best ships in the offshore industry at the time: 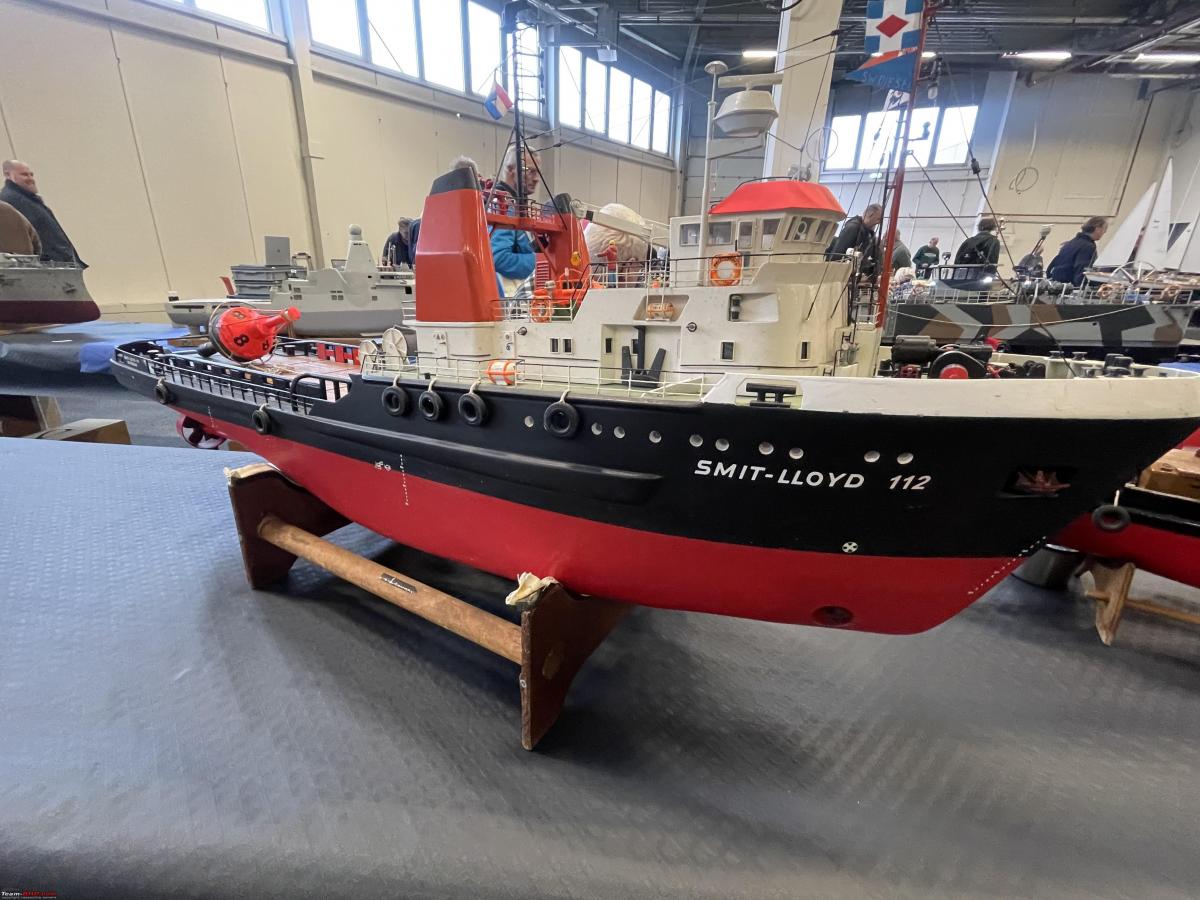 A close up of the aft deck and the winch control room. That’s where the chief or second engineer used to sit to operate all the different winches during anchor handling. The main towing winches are all build below the deck, the four wire reels are just for storage of wires and so on: I am always fascinated by steam engines, whatever shape or format. Just admire some of these for the level of detail that went into them. All working on real steam!! They run on compressed air here, because it is so much easier and safe. But it takes a lot of skill and knowledge to ensure that there engines do run on real steam: Some more ships. Many of these ships are also radio controlled. This is a so called heavy lift vessel, from a company called Big Lift. The had a range of these, all called Happy “something”: The owner demonstrated how the two large heavy lift cranes work in tandem to lift these heavy loads, in this case, some section of a bridge: These guys specialized in building models of the old Liberty and Victory ships. Thousands and thousands of these were build during the second world war. There are only a few left. I know there is one, fully working, in the USA. I visited it during one of our West Coast tours: Some very impressive warships too: We will see some more of these. These sort of locomotives are a true work of art. Each part, each nut, bolt is made by the builder themselves! Some of these models take decades to finish. Fully working on steam: Here is an American locomotive, all ready: This is considered one of the more simple ones! Go figure! One of the true model steam locomotives guru’s is a Japanese guy called Kozo Hiraoka. My favourite YouTuber, Blondihacks, has just started building one of his models.

Here, yet another, unusual type of model build: These guys make models of old historic iconic petrol station in the Netherlands. These days petrol station all look the same, but there used to be a time, where some of these were designed by some of the top architects. This is a famous Dudok design, some 112 of these were build in the Netherlands. This one in particular I can still remember! It was not to far from where my parents lived. Build in 1955 the it was moved to the Autotron in 1995: Another very simple, yet smart design: Whereas in India most petrol stations are manned, almost all petrol stations in the Netherlands and in fact Western Europe are self service these days. At these old petrol station you would get proper service. They would fill up your petrol, check your tire pressure, add coolant and window washer fluid if needed.

But you could not get anything to eat or drink!! These days some of these petrol station seem to be catering more to the need of Supermarket customers than drivers.