There you are, driving down the interstate, cursing over your morning coffee at the guy in front of you. He’s just motoring along as though all is well in the world. He has no concern for the chunks of snow and ice that are flying off his car and right into your windshield. You’re furious enough at him not to even notice the fact that you’re doing the same thing to the person behind you.

We’ve all been guilty of leaving snow on our cars. Maybe the roof sits a little too high, maybe you’re afraid to chip the paint, or maybe the morning happened so fast that you could only focus on a few key spots. I’m not here to cast judgment. As an admitted offender in this area, I want to take a few minutes to go over cleaning your car off the right way. 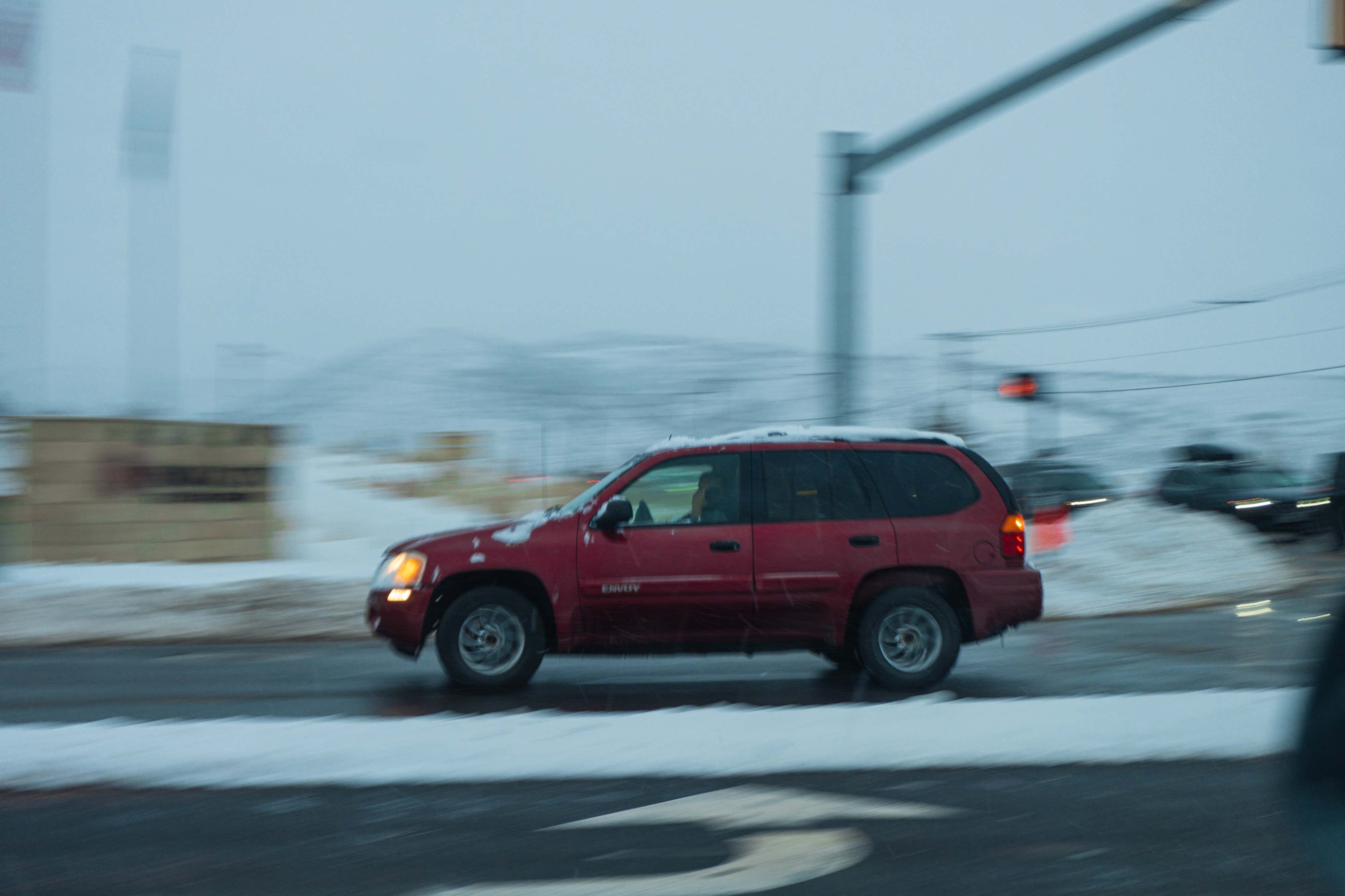 Why You Should Remove Snow From Your Car

There have been plenty of times in my life where I’d only worry about cleaning snow off the glass and lights because I knew the wind would take care of the rest once I started moving. I don’t exactly live in town, so no harm, no foul, right? Not exactly. Here in Pennsylvania, you can be cited for not cleaning the snow off your car before you start driving. I have been pulled over for it, and the officer was nice enough to let me off with a warning. Pennsylvania is not the only state with such laws. It’s also illegal to drive with snow on your car in these states:

While only a small portion of states have laws explicitly prohibiting driving with snow on your car, you can still get pulled over for it in others. Leftover snow and ice on your car might seem harmless, but the consequences can be catastrophic. A large chunk of snow can easily blind drivers behind you, or a big sheet of ice can break free and go sailing through the air, causing serious damage. I know plenty of people who’ve had front ends and windshields destroyed because of it. In most of those situations, the driver in front of them kept driving none the wiser, and the burden of repairs rested on the shoulders of the victims. 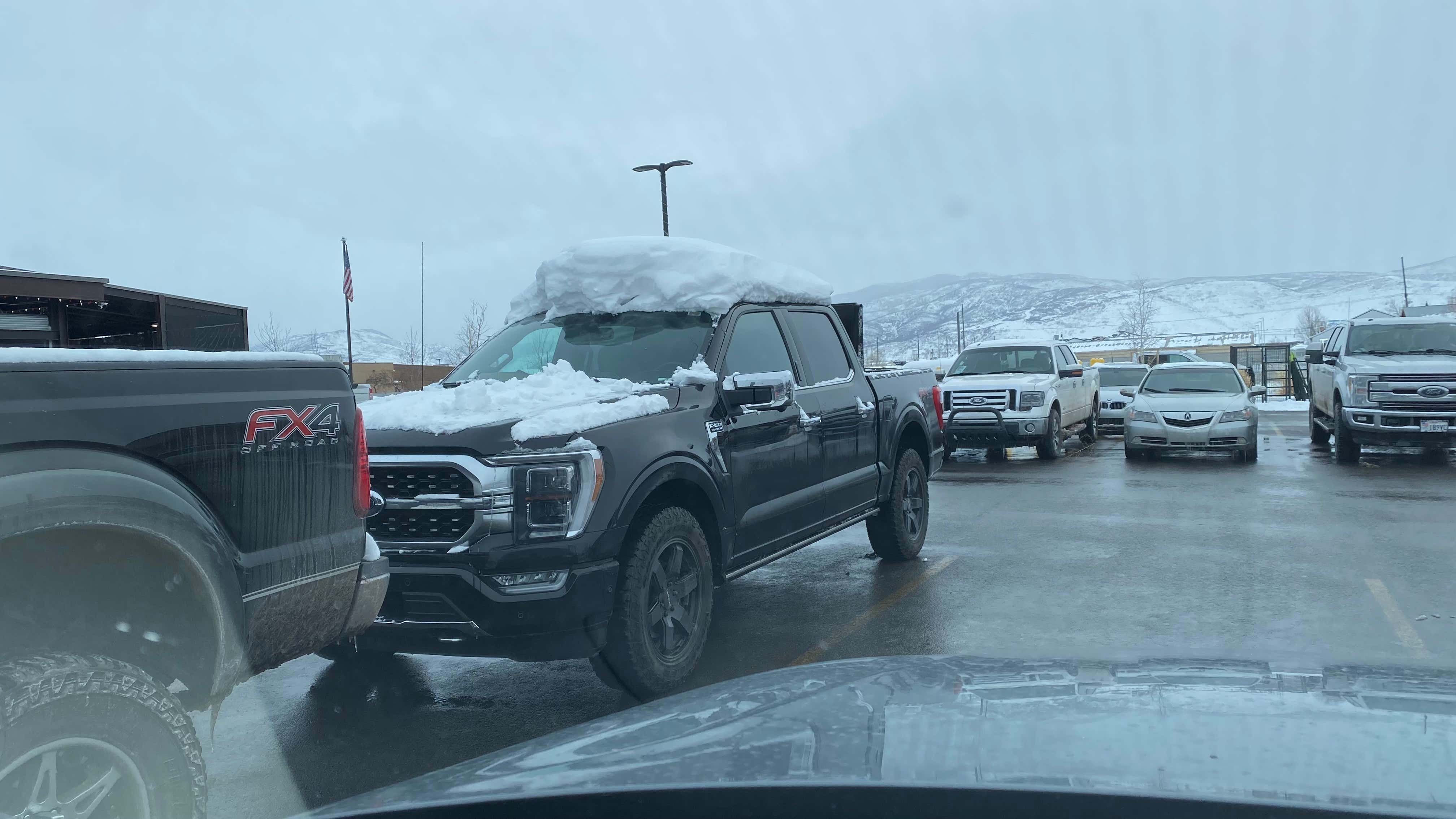 How Not To Clean Snow and Ice From Your Car

If you really don’t care about your paint or the vehicle in general, use whatever method you want. If, however, you want to keep it nice, you’ll want to avoid a few things. First, the snow shovel is not the tool for the job. It can be tempting to use it for those large areas, but it will tear the paint up. Save the shovel for sidewalks and removing the bulk of the snow out of an uncovered pickup bed.

Push brooms are also a no-go for the most part. They can be useful for taking a few inches of snow off the top, but they will drag debris across the surface, making a mess of your paint along the way.

Lastly, let’s not be lazy. Don’t skip the roof. Yeah, the snow up there will probably slide off once the cabin heats up and you start moving, but there’s no promise that it won’t ruin the day of the driver behind you. Even if it’s a light dusting, take a few seconds to make sure the roof is snow and ice free. 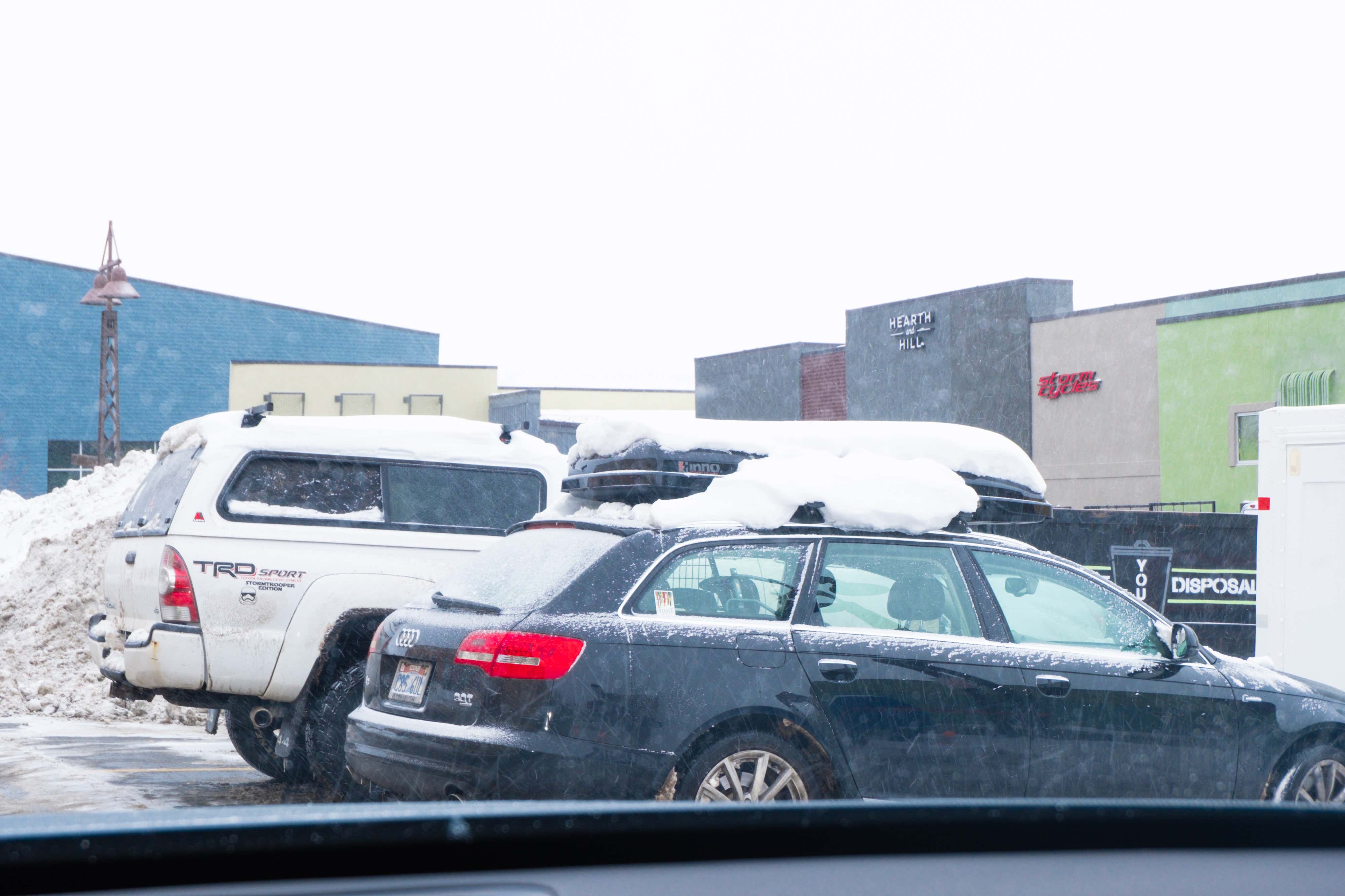 It’s removing snow from a car, so it’s not going to take an industrial facility to get it done. We recommend the following, most of which you probably already have:

The Right Way To Do It

Let’s get after it.

1. Slam Your Morning Coffee and Get Dressed

I know how important the morning ritual is before you head out. You’re golden if you can get up earlier and give yourself an extra 10-15 minutes. Otherwise, you’ll want to get ready quickly, so you give yourself enough time to deal with the snow on your car.

2. Start the Car and Warm It up

Heat is your friend. If you have a remote start, you can give yourself a few extra minutes to enjoy some java indoors. If not, you’ll need to get in there. Clean off the part of the roof near the driver’s seat and the door first, so you don’t have a slushy mess waiting for you. Fire it up and turn the defrost on. You can also enjoy a hot cup of joe while you wait for it to warm up a little.

3. Deal With the Bulk

The process won’t be the same every snowfall. Sometimes you’ll have a light dusting, and other times you might have a foot of snow or better to deal with. Your approach will also vary depending on how much you care about scratching the car up. If you just have a light dusting and want to preserve the paint, move to the next step. If there’s a heavy layer to deal with, you’ll want to start by removing the bulk of it without touching the paint.

If you’re not worried about the paint, just start pushing the snow away with the snow broom. In any case, you want to start at the roof and work your way down. A stepping stool is the best way to get the roof of a truck or SUV without making a mess of your interior.

4. Blow the Dust Away (Optional)

A leaf blower will make your life easier in this situation. If you’re being careful of the paint, it’s going to work wonders when you reduce the bulk down to a light layer. Just fire up the leaf blower and blast away anything sitting on the surface. It’s also good to have around to make quick work of a light dusting, even if you don’t care about being super careful of the surface.

If you had the defroster going, the front and rear windshields should be pretty easy to sort out. That said, you still need to make sure you clean up the side windows and mirrors.

As for the windshield wipers, some say you should lift them out of the way before a snowstorm, but it doesn’t actually matter. Either way, you can count on snow building up where the wipers tuck below the hood in the cowl area. Lift the wipers out of the way and clean the hidden chunks of snow tucked in there. It’s also not a bad idea to hit the washer pump a few times to deal with streaks or marks the snow left behind.

I don’t care how angular your ride’s body is, snow will stick to the lights. In the good old days, halogen bulbs could heat up the housings to melt the snow away. Even then, make sure they’re free and clear before takeoff. Take a few minutes to go over your vehicle’s exterior lights to ensure snow isn’t impeding visibility.

It’s easy to skip it, but if there’s anything a cop will pull you over for, it’s obstruction of the license plate. Get snow out of its way before you start driving.

8. Check the Mud Flaps and Wheels

Snow doesn’t just stick to the top of your car, especially if you’ve already been driving on slushy roads. While you’re already cleaning, take a minute to check your mud flaps and clear away any heavy deposits that might have built up here.

It’s also a good idea to check the inside of your wheels. It’s common for big chunks of ice to form in there. When they do, you’ll have a wheel-balance issue on your hands, which will cause it to shake and shutter as you drive. Getting them out of the way now may save you from a nervous breakdown later. 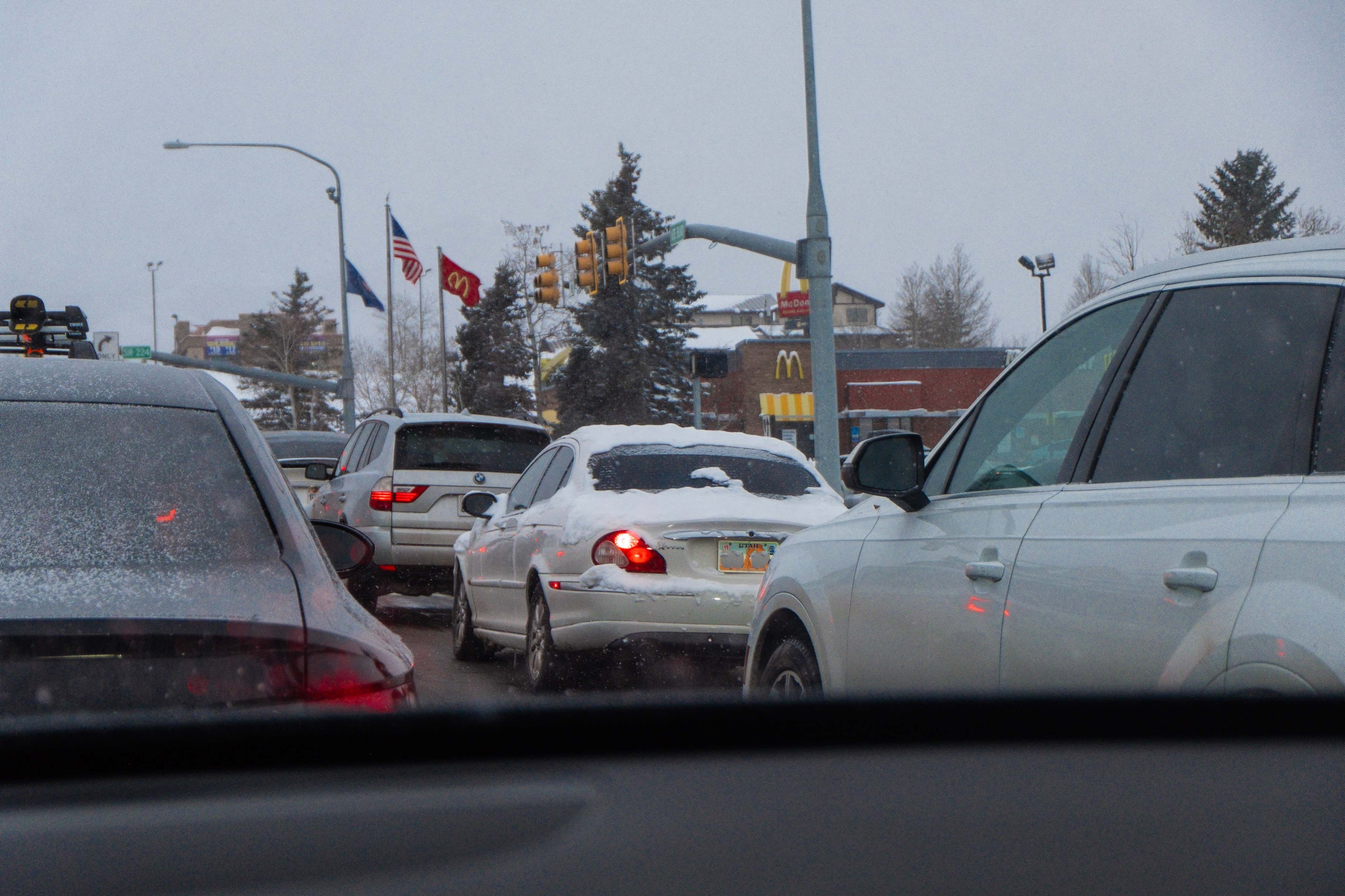 Keeping the Snow off the Paint Is Your Best Bet

I know the pain of being a car lover without a garage. It’s terrible, but that doesn’t mean there aren’t ways to keep the snow and ice off the surface of your car. I use an affordable car cover as a layer of protection. I know that’s not the best to protect the paint, but I’m all right with that. When it snows, I just have to push away the heavy layers and pull the cover off. No scraping, no thawing, just get up and go. If you’re OK with swirls and light scratches, or if you run a work in progress like me, I suggest doing the same.

One thing to consider is a pop-up carport. These are all right for summer conditions and maybe some light snowfall, but you don’t want your car anywhere near one when a foot of snow or more is coming down. I’ve seen firsthand just how quickly they’ll cave in with just a few inches of snow on top.

Just to drive home how damaging even a small chunk of snow or ice can be, check out this video.

Alfa GT CLR at the ‘ring | Time for Coffee?