New pickups don’t get much more advanced than the 2021 Ford F-150, especially with the PowerBoost hybrid drivetrain. Of course, this will change when battery-powered trucks finally hit the market in earnest, but the 14th-generation F-Series is quite the star from a technological standpoint. Let’s see how it compares, then, to a half-ton Ford from 56 years ago.

Luckily, the crew at TFL Truck owns one of each and can help us out here. The new truck is an F-150 XL with a rubber floor, steel wheels, and all-black plastic trim—pretty much the simplest example you can buy today but with power windows and that hybrid drivetrain. It’s being pitted against a 1965 Ford F100 that, clearly, isn’t the same. It’s got a 300-cubic-inch inline-six under the hood, supposedly from a dump truck, with manual locking hubs, no headliner, and a bench seat with a blanket over it. Oh, and don’t forget plenty of patina. 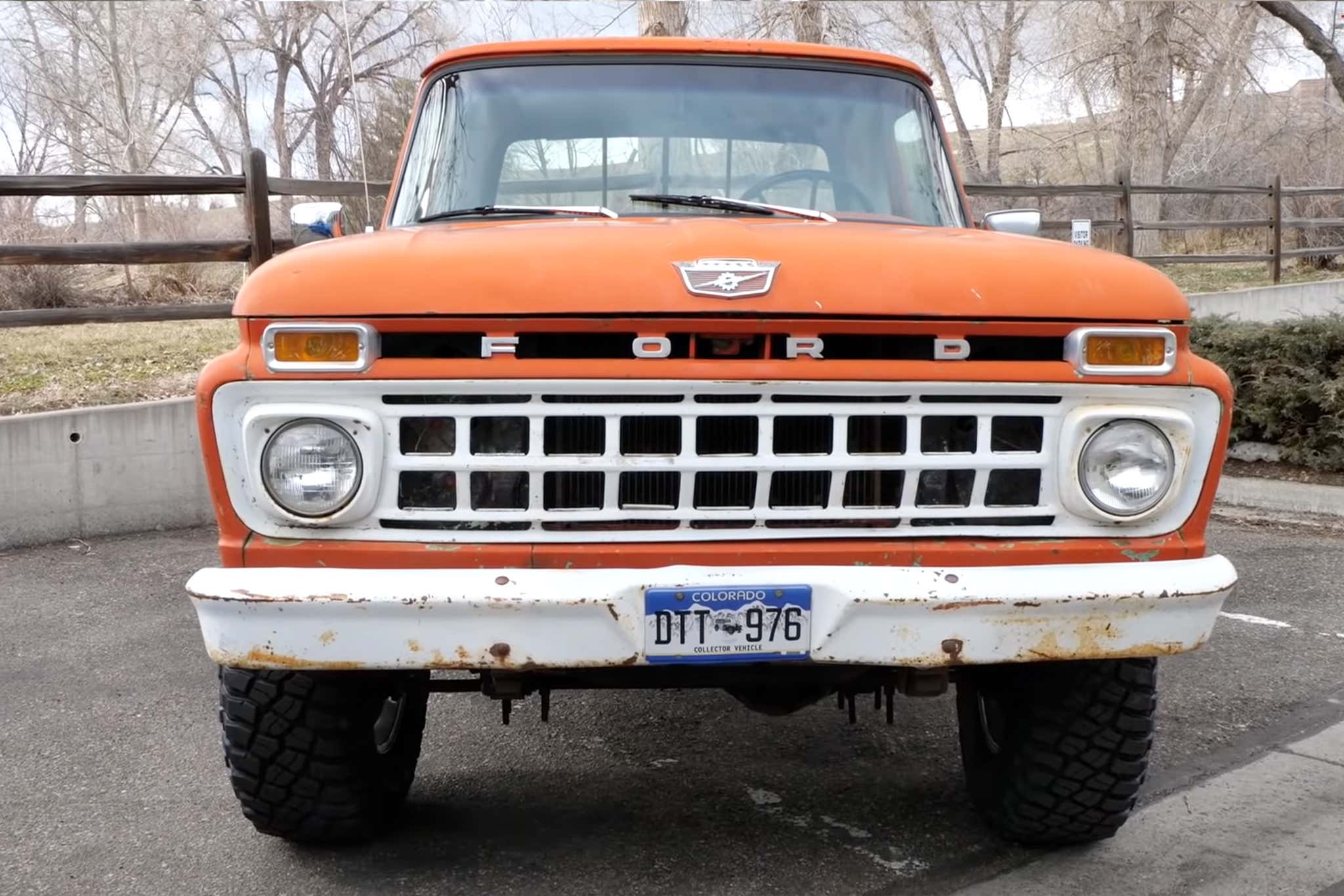 These two pickups aren’t spec’d as similarly as they could be, but for all intents and purposes, it should work. The real point of this test is to see how far the Blue Oval and, really, trucks as a whole have come since Lyndon B. Johnson’s U.S. presidency. The powertrain is probably the best place to start.

Ford’s new-for-this-year PowerBoost hybrid features a twin-turbo, 3.5-liter EcoBoost V6 that works in tandem with a 1.5-kilowatt-hour battery and 35-kilowatt electric motor. Power is relayed through a 10-speed automatic transmission and official output figures are rated at 430 horsepower and a class-leading 570 pound-feet of torque. Those are both hugely respectable, even for modern trucks, and it can drive on battery power alone depending on driving conditions.

Circling back to the much-older F100, the 300 inline-six has…none of that. The engine, lauded for its immense reliability and torquey low-end, produces somewhere around 150 horsepower according to my classic Ford sales literature. It’s leisurely dispersed through a four-speed manual transmission, which is really a three-speed with a crawler gear that’s better suited for off-roading. It’s sure to have lost some oomph over the years, too, but it likely produced somewhere 270 pound-feet of torque when new.

According to TFL Truck, the 2021 F-150 has a max towing capacity of around 8,300 pounds; the most capable PowerBoost hybrid is rated at 12,700 pounds. On the other hand, the F100 can pull roughly 5,500 pounds, albeit it at a much slower pace. The difference in payload is hard to pinpoint seeing as the F100 has been upgraded with period F-250 axles; for reference, the new Ford here can handle 1,750 pounds in the bed, which is marginally lower than a non-hybrid due to the extra weight it’s lugging around with the battery, electric motor, and other accessories. 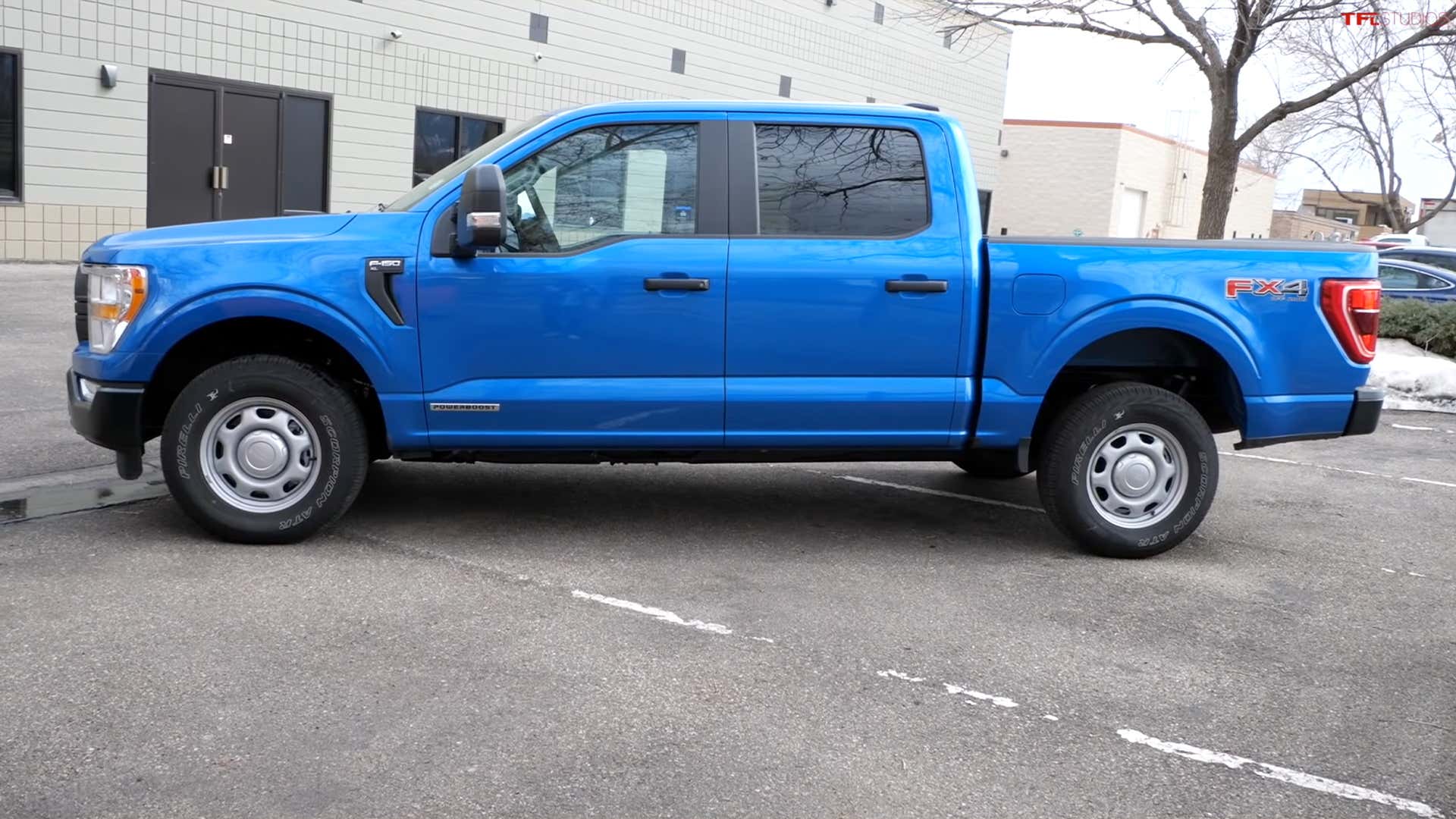 The 2021 F-150’s crew cab interior is a lot roomier than its Swinging Sixties counterpart but as far as modern trucks go, the interior is pretty barebones. It’s got a 60/40 split-bench up front, so there’s technically room for six, and the cloth seats and rubber floor combo means it can easily be hosed out if needed. It does have the eight-inch infotainment screen that comes standard on the XL trim, which is pretty up class in a work-spec pickup.

The ’65 F100, meanwhile, features so much more duct tape—just look at that gearshift. I’m not one to criticize here, of course, but it’s obvious that this one has been used a whole lot more than the 2021 model. It’s got a steel dash and no AC, though one key feature it does have is smoker windows. You’ve gotta love smoker windows.

There are a few more footnotes to mention—the new F-150 is made primarily of aluminum while the F100 is constructed with traditional steel. Modern powertrain tech means the 2021 Ford can average nearly 25 miles per gallon while its predecessor is lucky to hit half of that. These are the tradeoffs but, ultimately, no one is shopping these against each other so it’s more for comparison’s sake.

Perhaps the most glaring difference, though, is the price. You’re looking at $50,000 for the new F-150, due in part to the PowerBoost drivetrain being a $4,495 option over the base 3.3-liter V6. It does have an extremely handy ProPower Onboard inverter built-in, whereas the closest you’ll find to that in a ’65 is one with a dual-fuel generator in the eight-foot bed.

Meanwhile, you can probably pick up a running and driving F100 of the same vintage for around $5,000 total.