Home » Auto News » He Was a Champion Racer Sentenced to Life for Smuggling Pot. Now He Fights For People In Prison

You could probably forgive champion racing driver and kingpin marijuana smuggler Randy Lanier for wanting to spend his remaining years hanging out at the beach in peace and quiet. After all, he long believed he would die in prison.

After his 27-year “living death” prison sentence came to an unexpected end in 2014, most people would understand if he’d want to just spend time with his twin grandsons, reconnecting with family members and old friends. They’d respect him for spending his relaxing days in the Florida sun, maybe fixing up old cars and dabbling in grassroots racing, as he did before the drug-smuggling operation that funded his motorsports career consumed his whole life. Like he did before everything went so wrong.

As an up-and-coming sports car racer in the 1970s and ‘80s, he dreamed of one day winning the Indy 500, and in fact, was named the race’s Rookie of the Year in 1986. Behind the scenes, though, his racing ambitions had always been funded by marijuana smuggling, the profits from which were so enormous they enabled him to compete against factory works teams from Ford and Jaguar and well-funded privateers. Then he got caught, swept up in Reagan’s War on Drugs and handed a life sentence without the possibility of parole in 1988.

That he got out is nothing short of a miracle, but the quiet life isn’t what the now 67-year-old has chosen. He’s open about his mistakes. He readily admits the wrong he’s done and the laws he broke. And he’s back in the cannabis space again—“Legally, this time,” he clarifies—and is working to help people convicted of marijuana offenses and their families.

[Join us and our sister site, MEL Magazine, for Cars & Crime Week. It is a 10-story team-up between both sites that explores stories through the lens of cars and shows that true crime isn’t all serial killers and senseless murders (for the most part).] 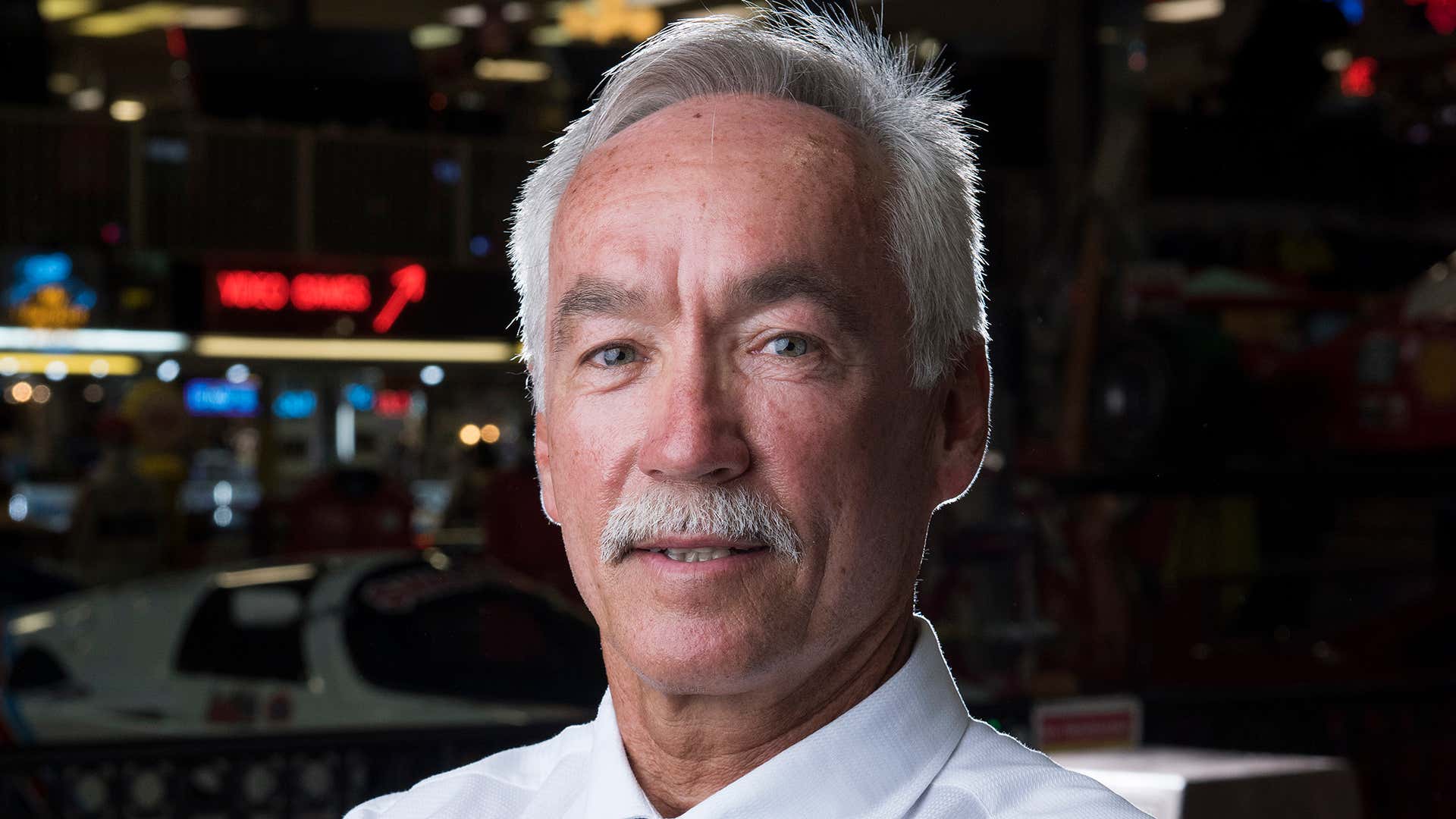 “There’s too many people, too many families, suffering unnecessary hardships” over marijuana laws, Lanier told The Drive in a recent interview. “They’re my brothers and sisters. I say that sincerely. I felt like I left some of my brothers and sisters behind, and whatever I can do to help them through their struggles, well, then I want to step up.”

Taken altogether, Lanier’s life feels tailor-made for a Netflix documentary (which happened) or a book that could rival any true crime novel (which is also happening.) His new memoir, Survival of the Fastest: Weed, Speed, and the 1980s Drug Scandal that Shocked the Sports World —co-written with A.J. Baime, the Go Like Hell author, former Editor-at-Large of The Drive and current Editor-at-Large at Road & Track—will be released on August 2. It can be pre-ordered here. 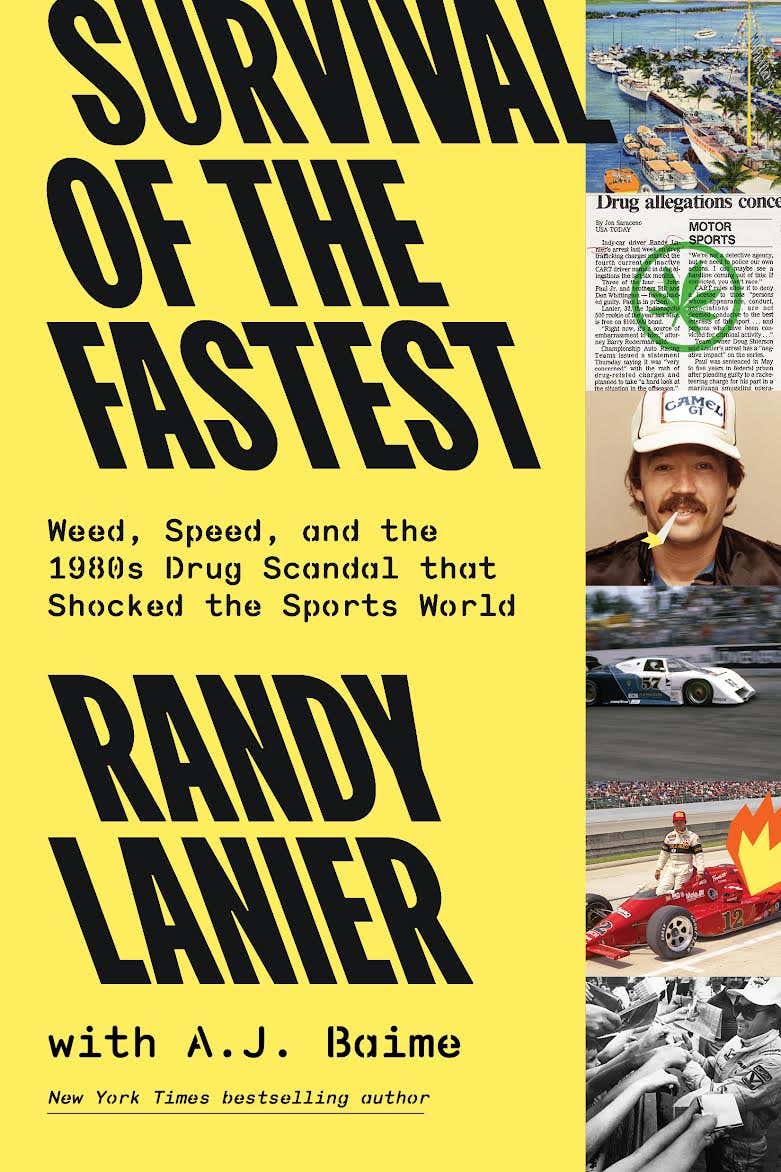 “The story is so crazy and so redeeming it’s hard to believe it’s true, but it really happened,” Baime told The Drive. “The stuff that happened to him in prison toward the end of the book, for me, there won’t be a dry eye in the house. I’m hoping it’s moving.”

The book covers Lanier’s childhood in Florida, his entry into the racing and drug smuggling worlds, the charged and often dangerous drug scene of the 1980s, his career in professional motorsports, and his long journey in and out of prison.

“It’s a thriller. It’s a 200 mile-an-hour adventure that’s nonstop,” Lanier said of the new book. “Writing the book is also emotional for me because it went back and rehashed a lot of things. I guess I’m a self-therapist now.”

The Racer, The Smuggler

The word “smuggling” kind of understates the scope of what Lanier and his associates did; their organization shipped some 600,000 pounds of marijuana into U.S. ports via speedboats and later barges, according to federal prosecutors. He was probably one of the biggest cannabis brokers in American history. 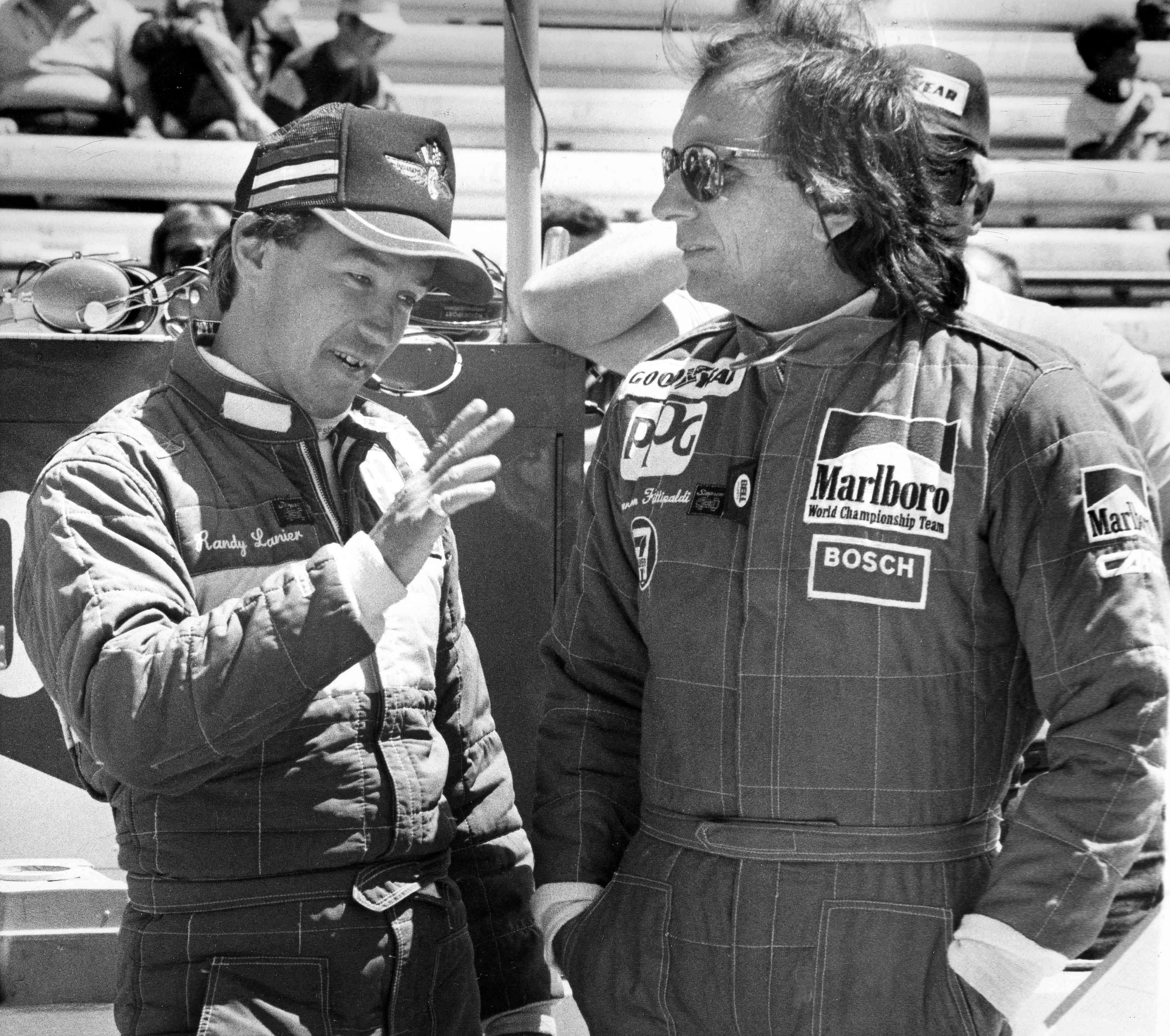 Lanier and Emerson Fittipaldi in 1986.

Like his racing career, the enterprise started small. While Lanier was running a Porsche 356 in regional Sports Car Club of America events in the ‘70s, and building considerable hype and connections around his speed, he was shipping marijuana in from the Bahamas to Florida with a Magnum powerboat. Eventually, the boats got bigger and bigger, as did his star in the motorsports world.

The enterprise was lucrative enough to fund his sports car racing career, and as a driver, he was fast enough to be the IMSA Camel GT Champion in 1984. Next came CART, the sort-of predecessor to today’s IndyCar series, where he was named the Indy 500’s Rookie of the Year in 1986.

But it should be no surprise that the sheer scale of their smuggling operation, and related ones in the area, would catch the attention of law enforcement, especially when it was a longstanding mystery how this out-of-nowhere Blue Thunder Racing Team was able to compete at the top level with no major corporate sponsors. The same year Lanier got his Indy 500 accolade, his racing team partner and that man’s brother were indicted in federal court on charges of conspiracy to import marijuana, tax fraud and income tax evasion. Though Lanier denied any involvement at first, similar charges came for him eight months later as prosecutors unraveled a sprawling money laundering conspiracy as well. 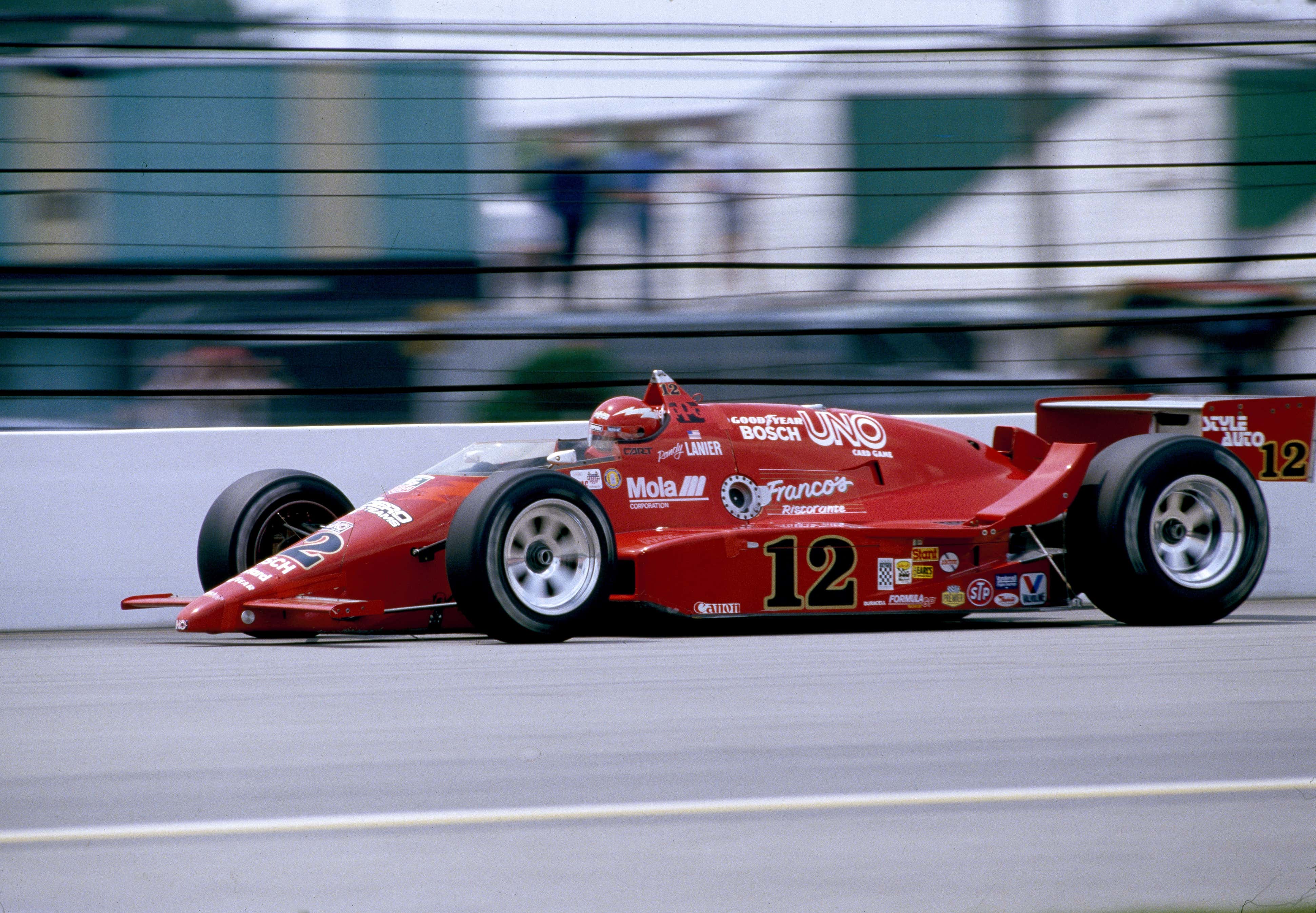 Instead of showing up to court to face his charges, Lanier abandoned his family to become a fugitive in the Caribbean. After he was caught by local authorities, he was extradited to the U.S. to face trial, and in 1988 was sentenced in 1988 to life in prison without the possibility of parole.

His actions were not harmless, of course. During one barge’s voyage, a fire broke out, killing two crew members working as welders. The judge who condemned Lanier to die behind bars said he “ruined a lot of lives in this country.” Still, Lanier maintains he got a draconian sentence, even by the harsh standards of the Reagan-era War on Drugs.

Despite countless appeals, he was locked away in federal prison until 2014 when his release came after what he now calls “the perfect storm of circumstances”: an Obama-era effort to re-examine long sentences of nonviolent federal offenders, and an investigation into how law enforcement officials handled some of his seized properties, namely a casino. 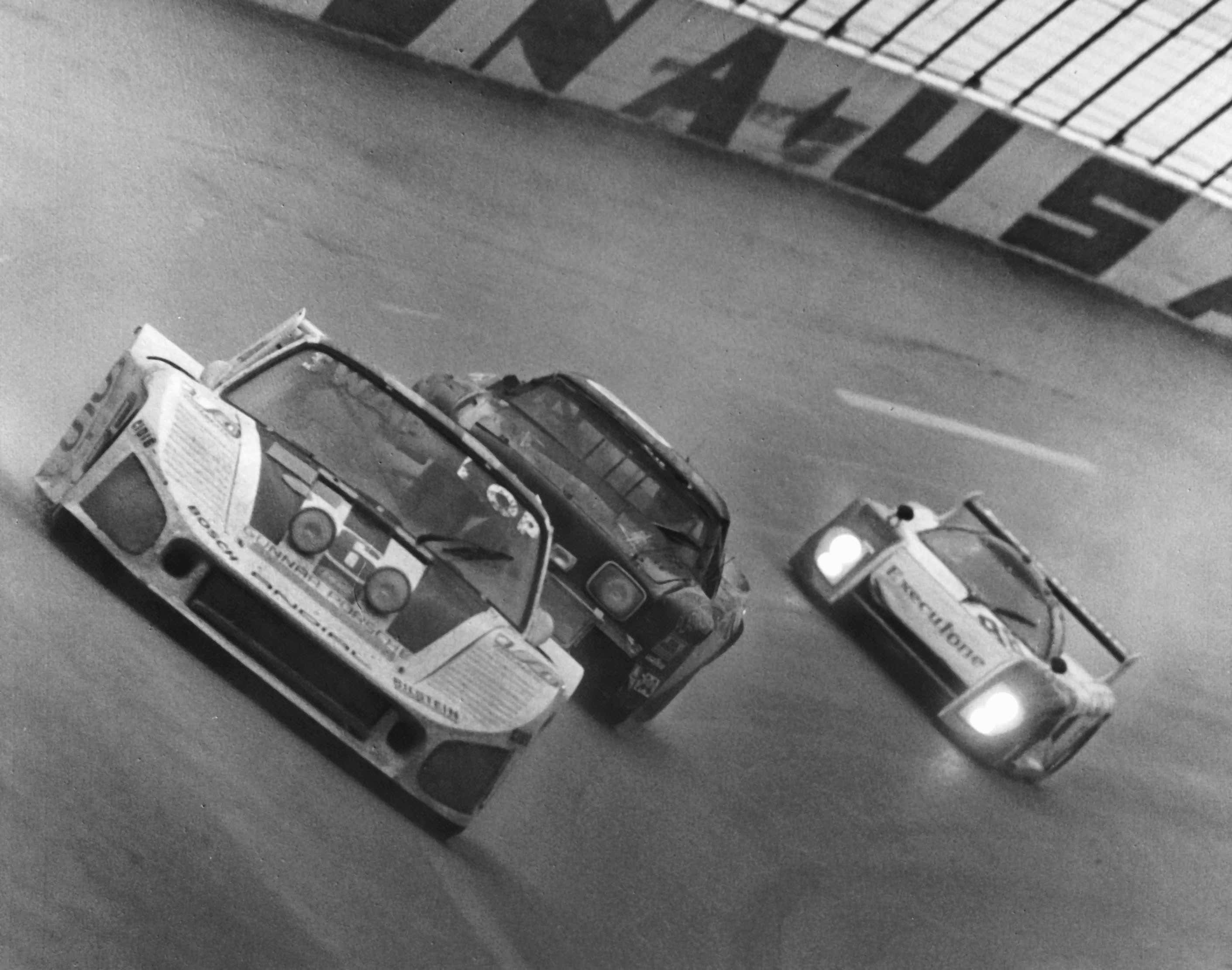 “That was deemed improper, the Department of Justice benefited from it, and they got the directive to let me out,” Lanier said.

Since he got out, he’s stayed busy. His story—driven, in no small part, by changing attitudes toward cannabis in modern times—has been told in many places in the world of cars and beyond. There was the Netflix documentary, a Miami Herald podcast, a Maxim article penned by Baime, a Jalopnik video about his return to the track for the first time in decades, a Donut feature, a profile in Rolling Stone, a story he wrote for Road & Track, and much more.

When you talk to him, however, it never feels like any of this went to his head. Mostly, Lanier comes off as cheerful, humble and grateful to be out, and eager to help people impacted by what he calls an unfair system.

And Now, The Activist

After nearly 30 years in prison, Lanier entered a world that’s very different from when he went inside. Besides astoundingly fast modern cars and mobile devices able to spread information at an unprecedented rate, recreational cannabis is legal in most states, legal and medical dispensaries are an increasingly common sight, and the current president even campaigned on decriminalizing the substance (though as Lanier points out, he has been slow to deliver on that front.)

Lanier said he attributes this to both increased research into cannabis, and the internet democratizing people’s access to it. “Now, that’s available to every layman on the planet,” he said.

Lanier now lives near Fort Lauderdale. He taught classes for tai chi and meditation, which he learned in prison, at the beach. He was a performance driving school instructor for a bit, teaching newcomers to be fast from behind the wheel of a C7 Corvette, though he said the pandemic put an end to that about a year ago. And he still goes to races; recently, he went to Sebring with racing mogul Chip Ganassi, whom he calls an old friend. Recently, he re-married his ex-wife Pam, who was with him before he went to prison.

But after losing someone close to him to an overdose, he said he got a job at a sober living facility, working with people addicted to alcohol and hard drugs like crack cocaine and heroin. Several of them, he said, were veterans of the Afghanistan war.

“It’s far-reaching, how the mind can take you down paths that none of us should go on,” he said. “Working with these people, and maybe having the light bulb go on for one person, was transformative.”

Where Lanier parts ways with much of the modern recovery community is his thoughts on cannabis. While the majority of 12-step programs generally treat it as any other drug, Lanier’s activism around cannabis is in part tied to his belief that it can be a “healing plant” that can treat things like pain management without the destructive effects of opioids, or that CBD can potentially reduce cravings for heroin. “In millions of people’s minds, it’s medicine,” he said.

But Lanier says what hasn’t evolved quickly enough for him is the laws that send scores of people, many of them nonviolent, to jail and prison for marijuana. “It’s not a war on drugs, it’s a war on our own citizens,” he said. “And if you look into it, you realize marginalized people of color are the most affected people. The propaganda that politicians have put on this plant, for whatever reason, is completely wrong.”

So in addition to working as a brand ambassador for a Nevada-based legal cannabis company, Lanier is actively involved with Freedom Grow, a nonprofit organization that does a number of things for people incarcerated on marijuana charges, including commissary money, case advocacy and family outreach. Right now, they’re putting Easter baskets together for the children of those prisoners, Lanier said.

“When you’re in lockup, and you get some form of support, whether it’s just a letter or a photograph or a check to buy a new pair of sweats or something, you feel you have hope,” he said. “And I know because I went through this. You go, ‘Man, I’m gonna get through this shit,’ and I’m going to learn from it, and I’m going to grow.”

Both are important concepts to Lanier today, even now, and they heavily inform how he counsels people in similar situations. But while he’s long been upfront about his mistakes, he likes to say there’s a difference between regret and remorse; the latter is what he feels because it involves taking responsibility and wanting to change. Perhaps that’s why a cushy beach retirement wasn’t in the cards for him.

“I can’t tell you the gratitude I have waking up every day. And it never gets old,” he said. In the meantime, he hopes he can get back to instructing again if he can.

“Hey, I got my helmet and my suit right here available,” he said.

Prepare For A 1000bhp Electric BMW M5 This Decade

How the VW ID.4's Electric Range Compares to the Nissan Leaf, Tesla Model 3 and Mustang Mach-E