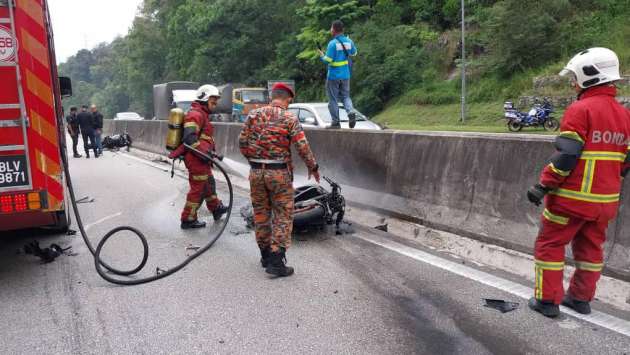 Congestion has been reported on the Kuala Lumpur-Karak Highway due to a crash that involved five superbikes at KM26.5 in the Kuala Lumpur-bound direction of the highway at around 1:45pm today, the New Straits Times reported.

The fast lane of the highway remained closed as of 2:30pm, when traffic was slowed to a crawl from KM35 in the Genting Sempah-Gombak direction to the location of the accident, ANIH Berhad senior general manager Radzimah Mohd Radzi told the news site.

“We ask all highway users to be patient and careful when driving, in addition to obeying the instructions from officers at the scene,” he said. From social media posts relating to the incident, it is understood that no lives were lost at the time, however the five motorcyclists involved were reported to have sustained serious injuries.

From dashcam footage posted to Dashcam Owners Malaysia Facebook page, a group of motorcyclists were shown travelling along this stretch of the Kuala Lumpur-Karak Highway, and the video then cuts to the scene of the crash.