There’s a bunch of engines out there that exist solely as redesigned variants of other engines. We’ve all heard of inline fours that are “half a V8” or V12s that are “two V6s put together.” However, irreverent YouTubers Garage 54 decided to take this ideology quite literally, hacking two cylinders off a four-cylinder Lada engine and seeing if they could get it to run and drive.

The decision was made early to chop the back end of the motor and keep cylinders one and two. This was simple enough, given that the timing chain, distributor, oil pump, and accessory pulleys all fit on the front end. However, cutting the rear cylinders off still comes with some issues. The crankshaft still has to be cut in half, and there are seals to worry about, as well as water and oil channels, too.

Actually chopping the engine in two was easy enough though, with a drop saw and some grinders doing the work. The cut line was made just to one side of a set of head bolts to ensure the head still sealed well on the block.

Fabrication was the order of the day, with everything from cams to the rocker covers needing to be cut and shut to fit the new two-cylinder design. Plenty of welding was done to seal up all the oil and coolant channels so they don’t simply spew out the end of the engine. Similarly, the exhaust and intake manifold were chopped up to suit the lower cylinder count. The crankshaft also had to have the rear main seal welded back on after it was chopped in half. 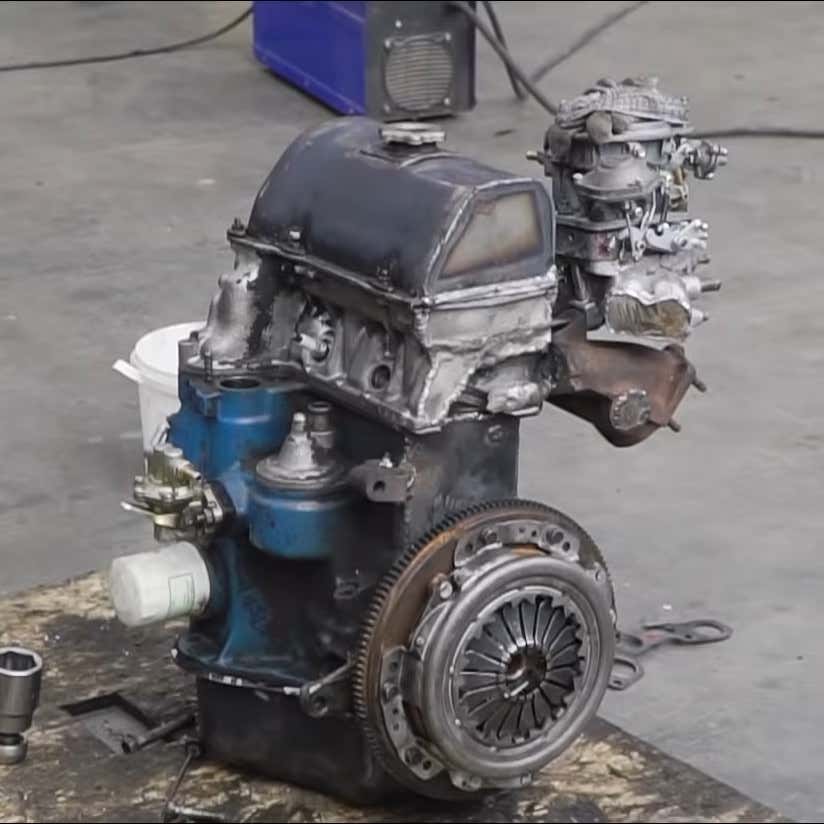 When all is said and done, it’s a cute little engine.

As usual, Garage 54 makes the ridiculous look easy and gets the engine started up without too much trouble. Mounted up in a Lada, however, the results are as sluggish as you might expect. The original engine had just 64 horsepower to begin with, and thus with two cylinders gone, the resulting motor is likely making less than half that.

The engine runs and rumbles along but struggles to propel the Lada along at pace. On flat ground things aren’t too bad, but climbing even mild hills ends in backfires and stalls. There’s a little blowby, and steam is apparent in the crankcase ventilation system too.

However, the fact that the engine runs at all is a credit to the hacky fabrication skills of the crew. We’d have expected clouds of oil smoke and coolant pouring out on the ground, but somehow the two-cylinder held together. It even propelled a car down the road, albeit poorly.

Doing such an experiment with an old Lada engine is probably the way to go, with the lower tolerances going a long way to letting the engine stand up to such abuse. Cutting apart a modern, high-compression four-cylinder would likely be more fraught with balance issues and keeping the head on tight. Distributor ignition and carburetor-based fueling are also easier to hack up for such tasks, versus the complications of EFI. 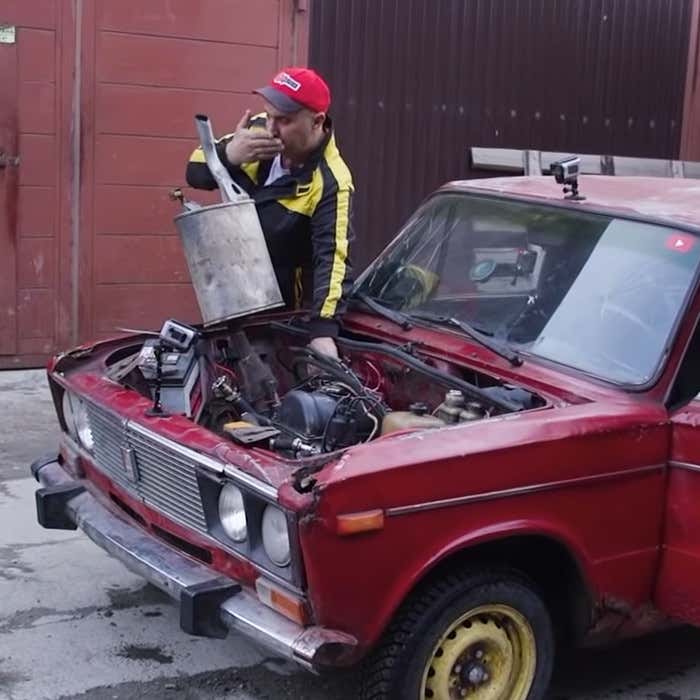 Vlad sniffs exhaust residue to attempt to diagnose issues with the 2-cylinder engine.

Whether they’re putting 14 wheels on a Lada or giving an old car legs, somehow Garage 54  always comes out on top. They could be forgiven for failing in many of their wild antics, but the fact they have so much success is at times shocking, but always impressive.

'He Was Just Grandpa to Us': Carroll Shelby’s Grandson Aaron on Growing Up with a Legend