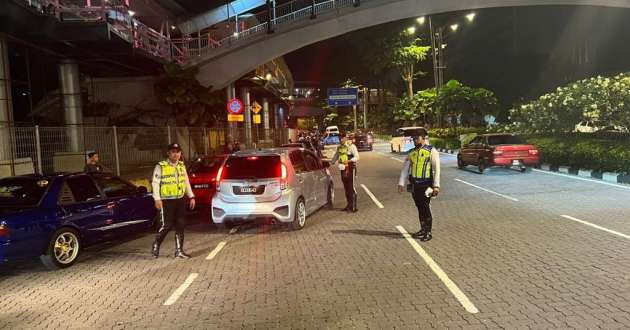 In “Operasi Halangan,” 35 cars and 10 motorcycles were impounded under Section 64 of the Road Transport Act 1987 (RTA 1987) for illegal modifications (exhaust system). The impounded vehicles will be sent to the department of environment (JAS) and road transport department (JPJ) for inspection before the owners are instructed to restore their vehicles to original specification. In total, 397 summons were issued during the operation that ran from 2am to 4am.

Meanwhile, “Operasi Samseng Jalanan” on the DUKE saw three individuals aged between 15 and 19 years old arrested for riding their motorcycles in a dangerous manner that included zig-zag overtaking, doing the “superman” and illegal street racing. Those that were nabbed will be charged under Section 42(1) of the RTA 1987 for reckless and dangerous riding that disturbs other road users.

During the same operation, an 18-year-old motorcyclist was also arrested under Section 29(1) of the Minor Offences Act 1955 and will be charged under Section 108(3)(e) for falsifying the vehicle registration number. According to JSPT KL, it will continue to conduct operations at the end of this week to prevent and stamp out road “samseng” activities as well as ensuring the safety of road users.

SUV purchase: Do I buy a used Skoda Kodiaq or the new Jeep Meridian

Join PH on track at Snetterton