The new-generation Ford Ranger marks Ford’s commitment to competing in the mid-sized truck segment in markets around the globe. However, the Michigan automaker isn’t content to simply let the Ranger serve out its tenure as a simple workhorse. The company has now announced the badass off-road weapon we all knew was coming — the Ford Ranger Raptor.

Like the Bronco Raptor before it, the Ranger Raptor will be the most powerful Ranger ever built. A hefty 392 horsepower and 430 lb-ft of torque comes courtesy of the twin-turbocharged 3.0-liter EcoBoost V6, tuned by Ford Performance. The V6 engine uses a compacted graphite-iron cylinder block, with a 75% increase in strength and stiffness compared to iron traditionally used in engine block castings. A 10-speed automatic gearbox sends drive to the wheels, with the engine tuned with custom boost profiles for each gear ratio. The engine also comes fitted with an anti-lag system, which switches on in the truck’s Baja drive mode. It can keep the turbos spinning at boost-generating speeds for up to three seconds after the driver rolls off the accelerator. It’s intended to help the engine remain on boost during gear changes or when the driver is modulating the throttle during off-road driving.

In some markets, a 2.0-liter twin-turbo diesel engine will also be available. As with many details surrounding the new global Ranger platform, engine options in the Raptor will vary depending on the country of delivery. The truck will be built for both left-hand-drive and right-hand-drive markets. Today’s announcement is targeted at a global audience, so specifics may change before the Ranger Raptor comes to the US next year.

The Ranger Raptor also comes with an active exhaust, allowing the driver to specify their desired level of auditory violence. Four modes are available, starting at Quiet for use in crowded areas. Meanwhile, the full-send Baja mode “behaves more like a straight-through system” according to Ford, and is recommended for off-road use only. Get keen for that one. 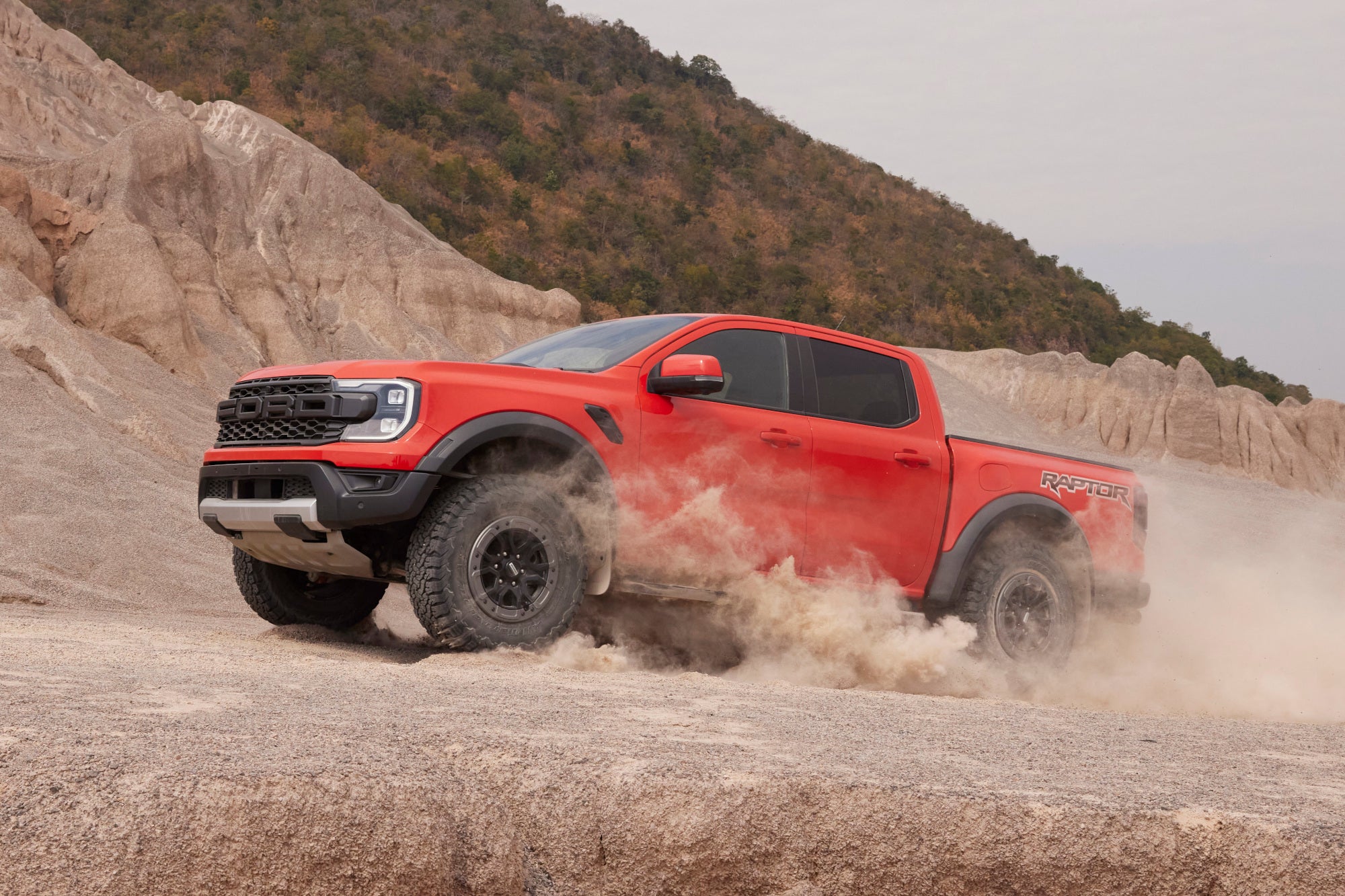 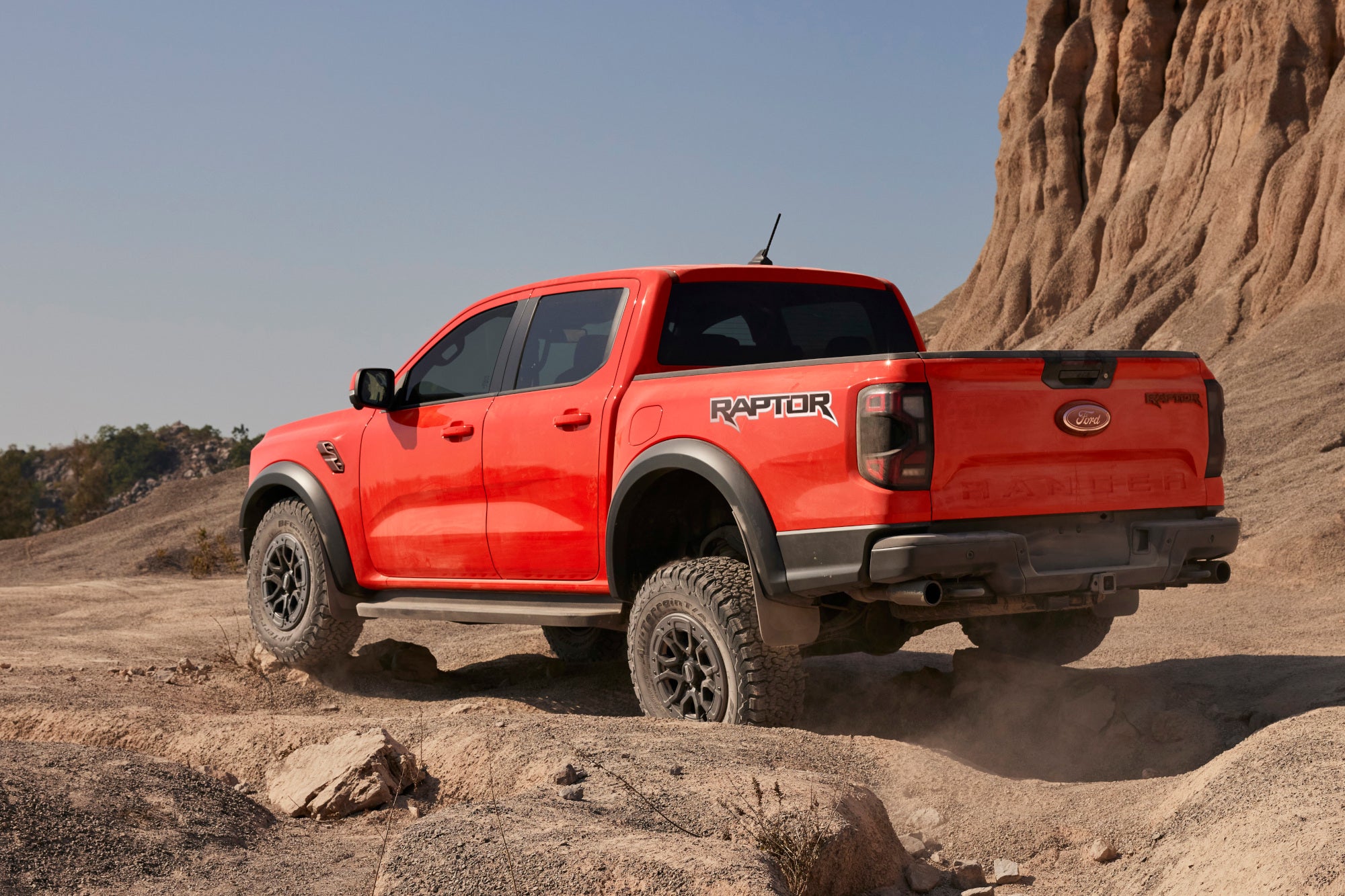 Similar to other vehicles in Ford’s Raptor stable, the Ranger Raptor gets significant chassis upgrades over the base truck. The C-pillar, load box, and spare wheel well are reinforced, while the shock towers, bump stops, and rear shock bracket all get unique frames designed to handle punishing off-road driving.

Upper and lower control arms are also all-new for the Raptor, with the front and rear suspension redesigned for extra travel to better allow the truck to travel at high speeds over rough terrain. FOX Live Valve dampers are installed at all four corners, filled with Teflon-infused oil for 50% reduced friction compared to the previous Raptor model. We’re not convinced too many people found excessive shock friction to be a primary issue in older Raptor models, but we’re glad Ford has addressed this nonetheless.

Perhaps more importantly though, the dampers are set up to provide max damping in the last 25% of their travel. This is to better allow the truck to avoid severe bottom-outs as much as possible, and the system also helps guard against squatting during hard acceleration. Given the preview of the Ranger Raptor showed a mule truck taking a hefty jump, it’s clear that this was a key focus for the engineers on the project. 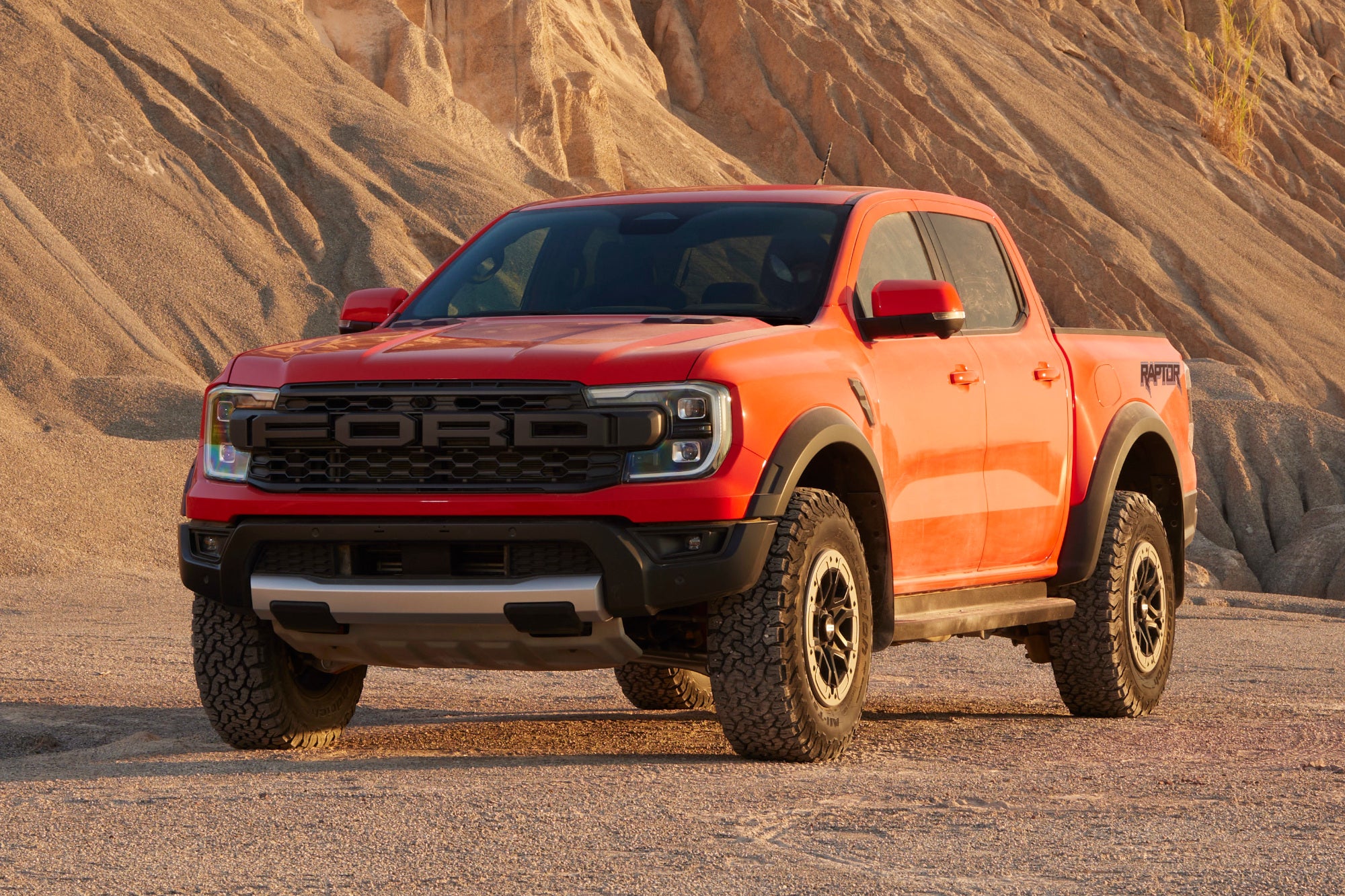 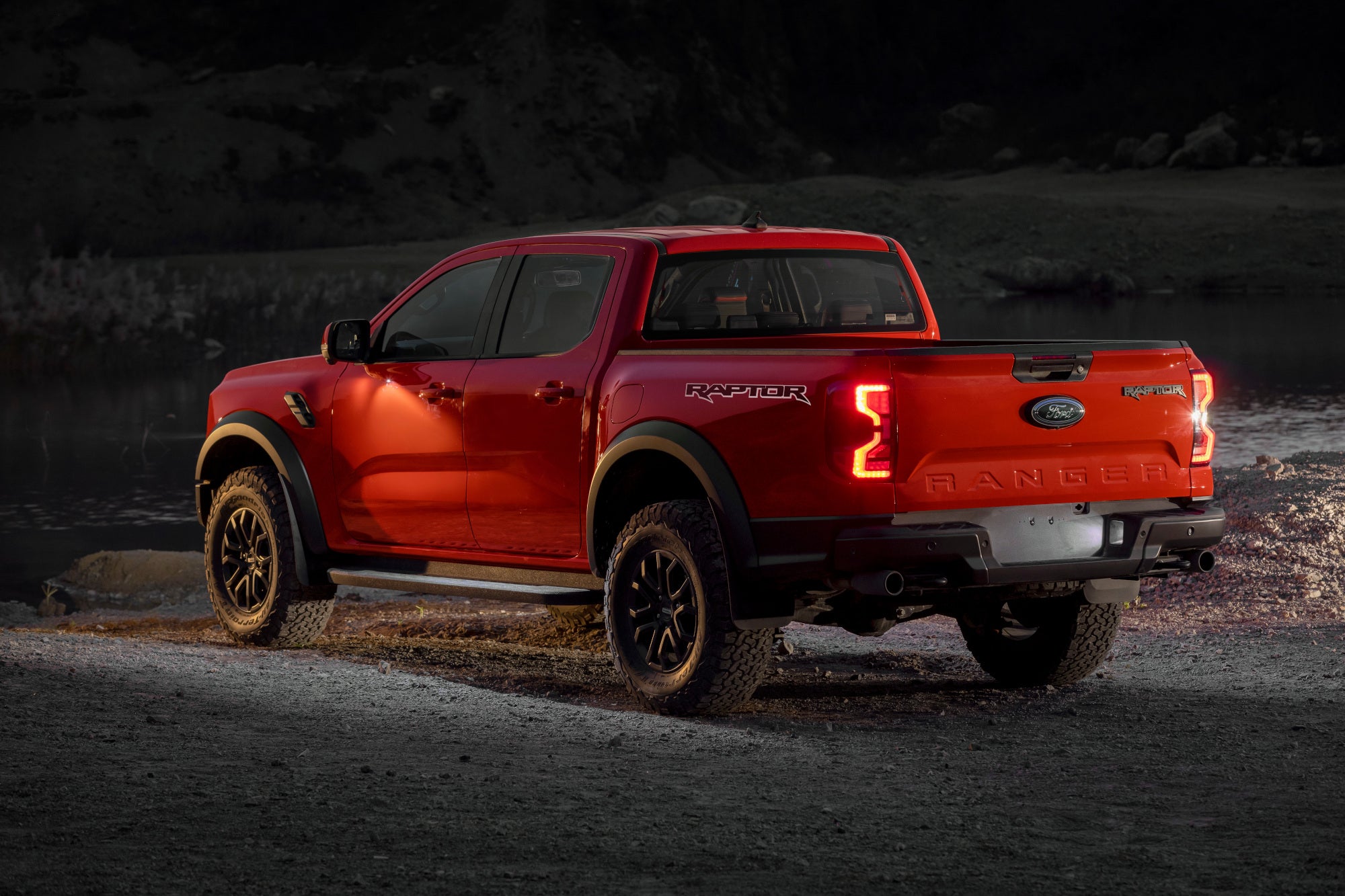 Protection is a key part of the Raptor offering too, with the truck getting heavy-duty bash plates almost double the size of those on the stock Ranger. Meanwhile, twin tow hooks front and rear are intended to help make recovery as easy as possible if you do get into trouble.

The Ranger Raptor draws its inspiration from desert racers,  but Ford also wanted to ensure the truck could handle overlanding duties as well. Front and rear locking diffs do a lot to aid this cause, combined with an electronically-controlled two-speed transfer case. A variety of drive modes are aimed at handling different situations. Normal mode is aimed at street driving, while others include Rock Crawl, Sand, and Mud/Ruts to handle typical off-roading conditions. Baja mode is, as you’d expect, designed to configure the truck for peeling out through the desert at a rapid pace, and is intended “for off-road use only”. 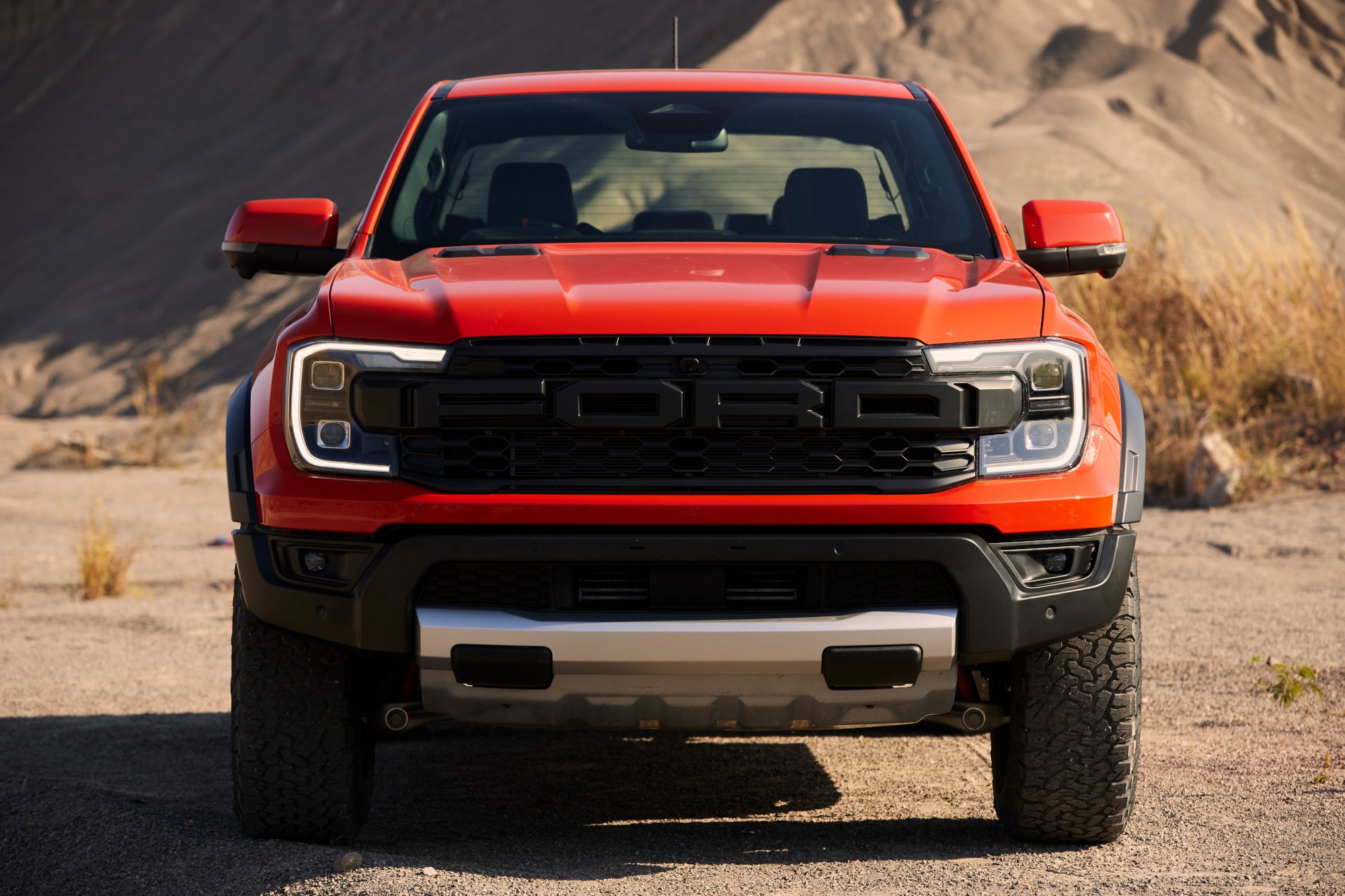 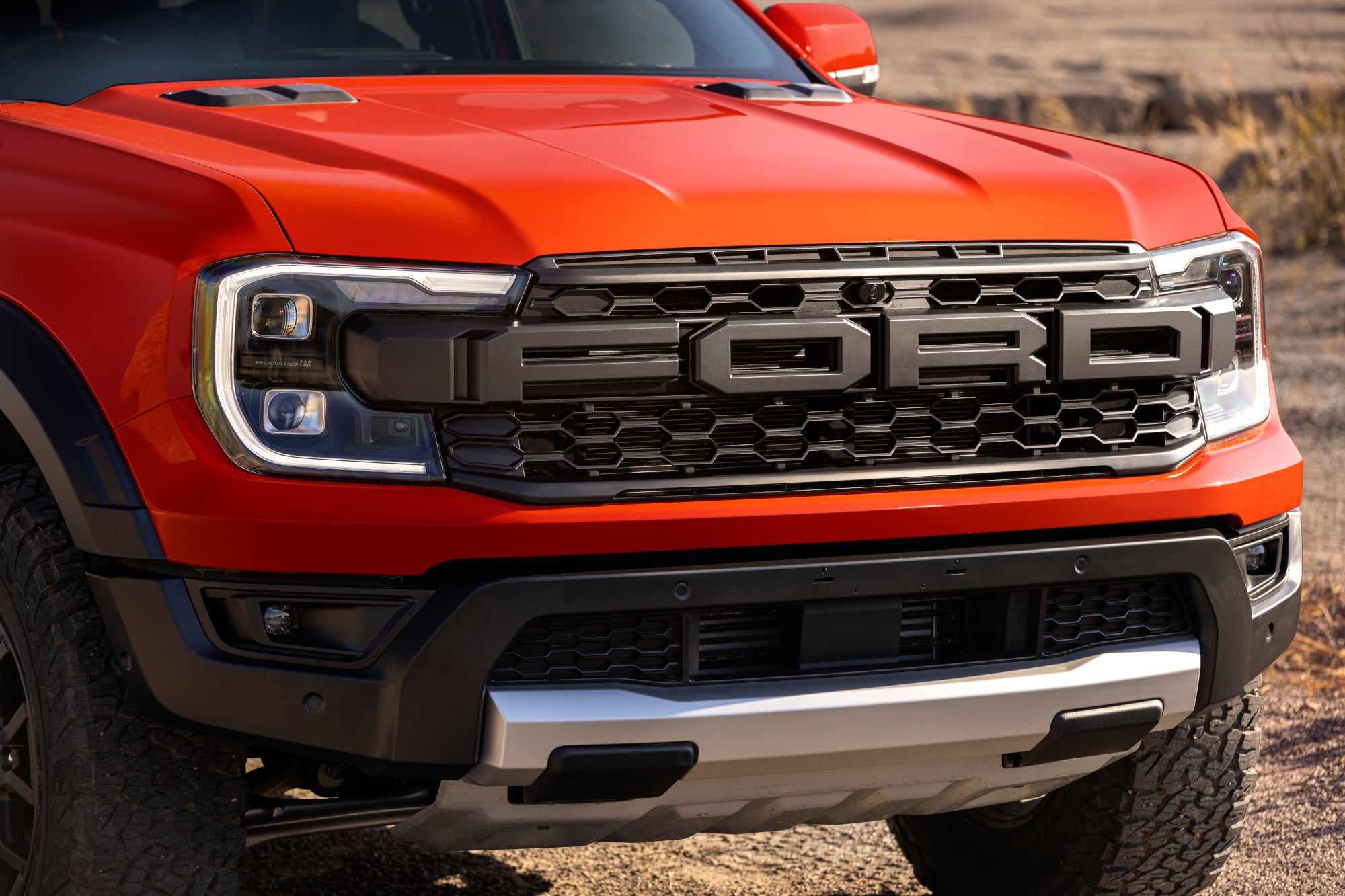 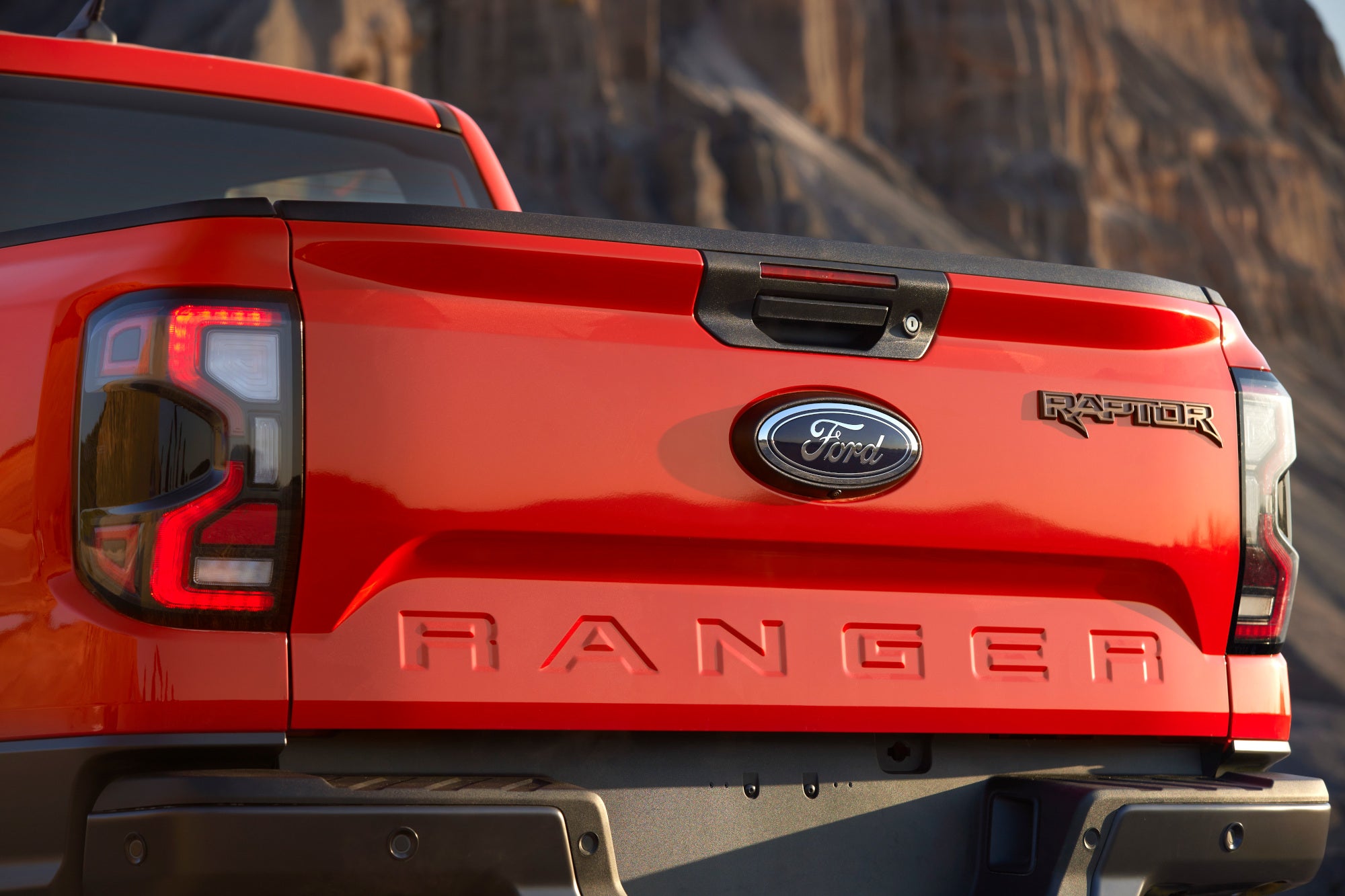 Aesthetically, the Raptor gets the big F-O-R-D lettering up front, flared wheel arches, and aluminum side-steps among other tough design touches. Two choices of 17-inch wheels are available wearing 33-inch BFGoodrich KO2 tires, though Ford currently states that the beadlock-capable version is exclusive to Australia and New Zealand. One suspects this may only be for initial launch, as Ford would likely have many customers eager to fit beadlocks when the Ranger Raptor comes to the US.

Inside, there’s a 12.4-inch digital cluster paired with a 12-inch center touchscreen running Ford’s Sync 4A infotainment system. Wireless connectivity for Android and Apple smartphones is included, and there’s a Bang and Olufsen sound system for when you feel like cranking the tunes. Seats are all-new, inspired by jet fighter designs, and there’s plenty of Code Orange color accents to remind you that you’re in a proper performance off-roader. 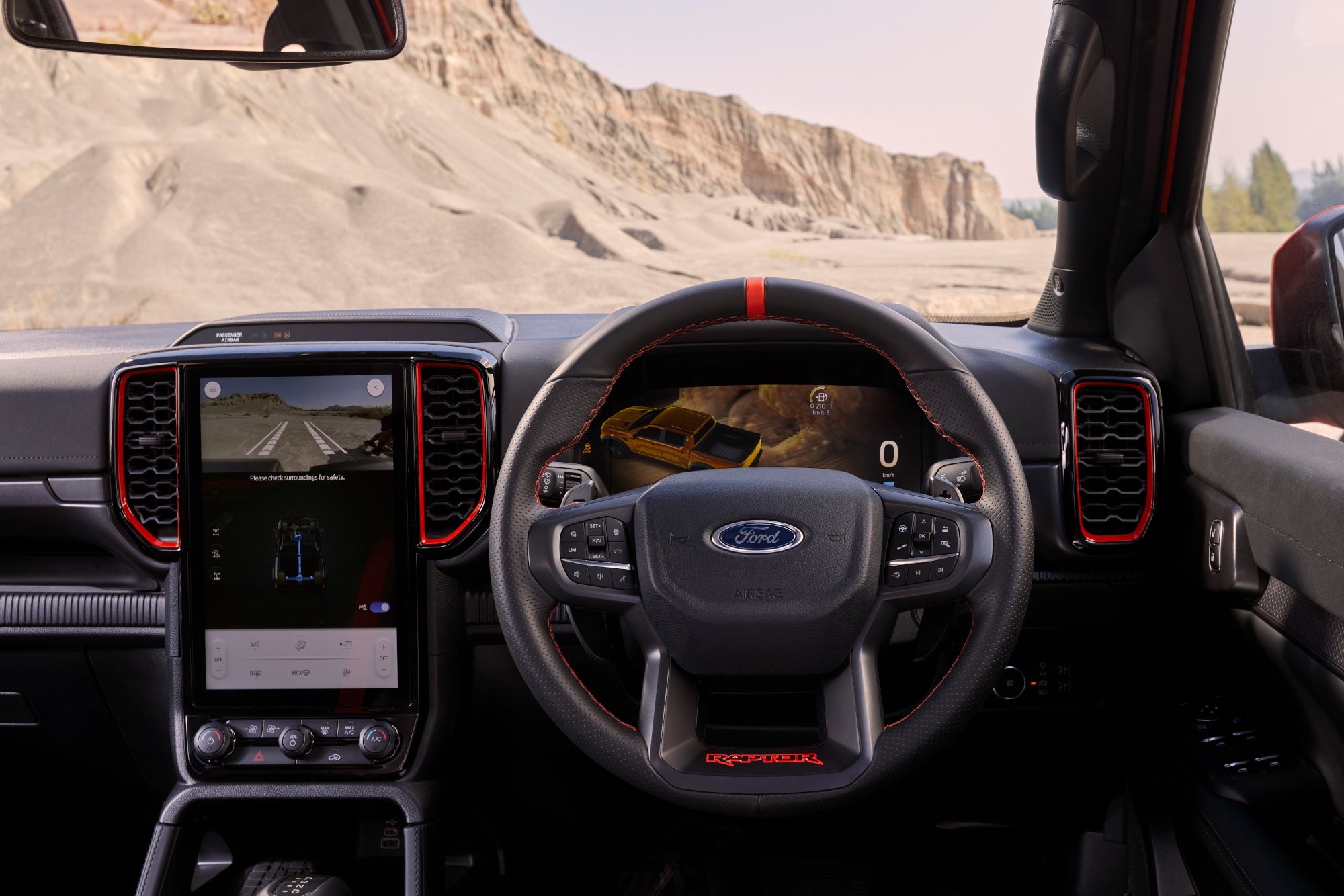 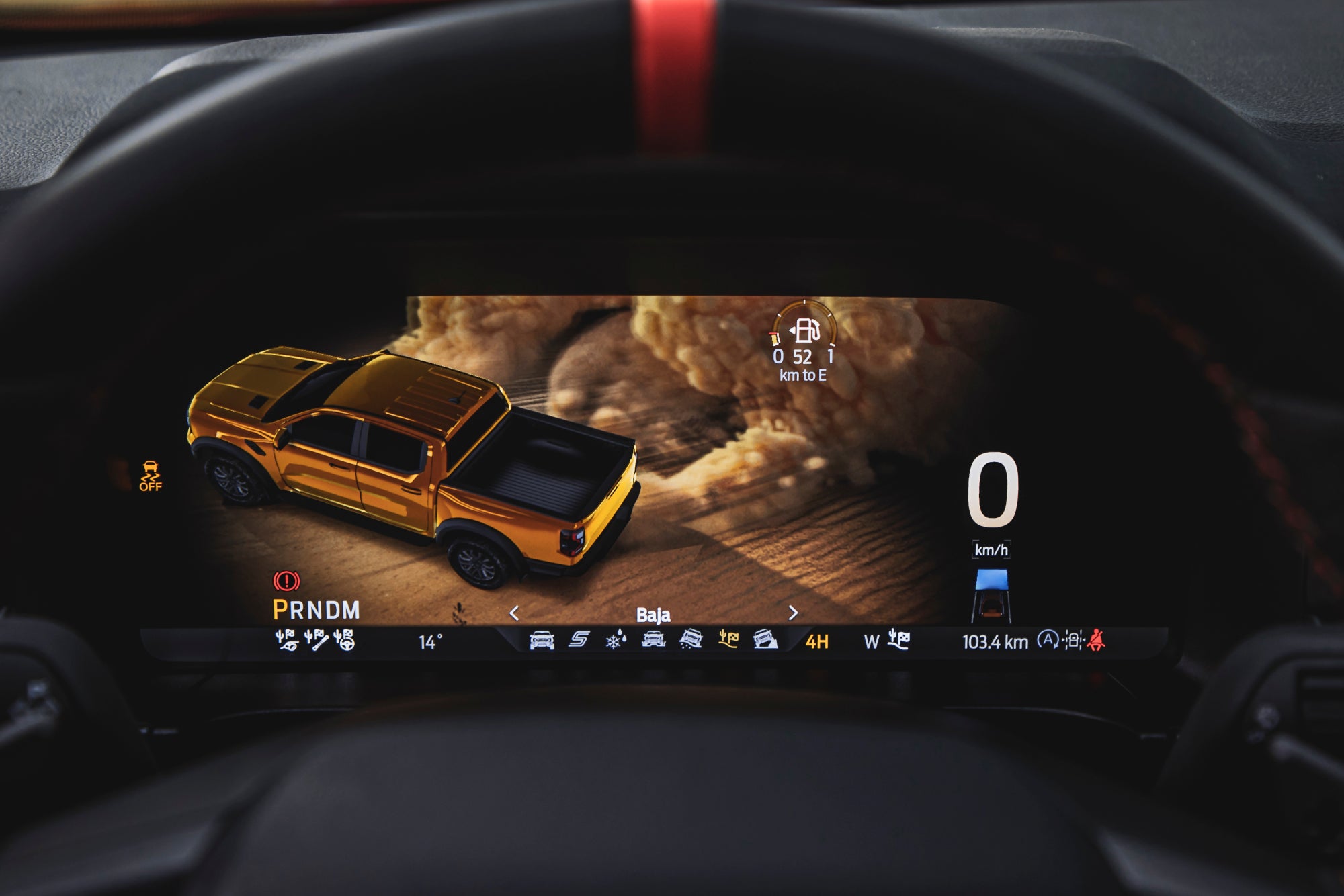 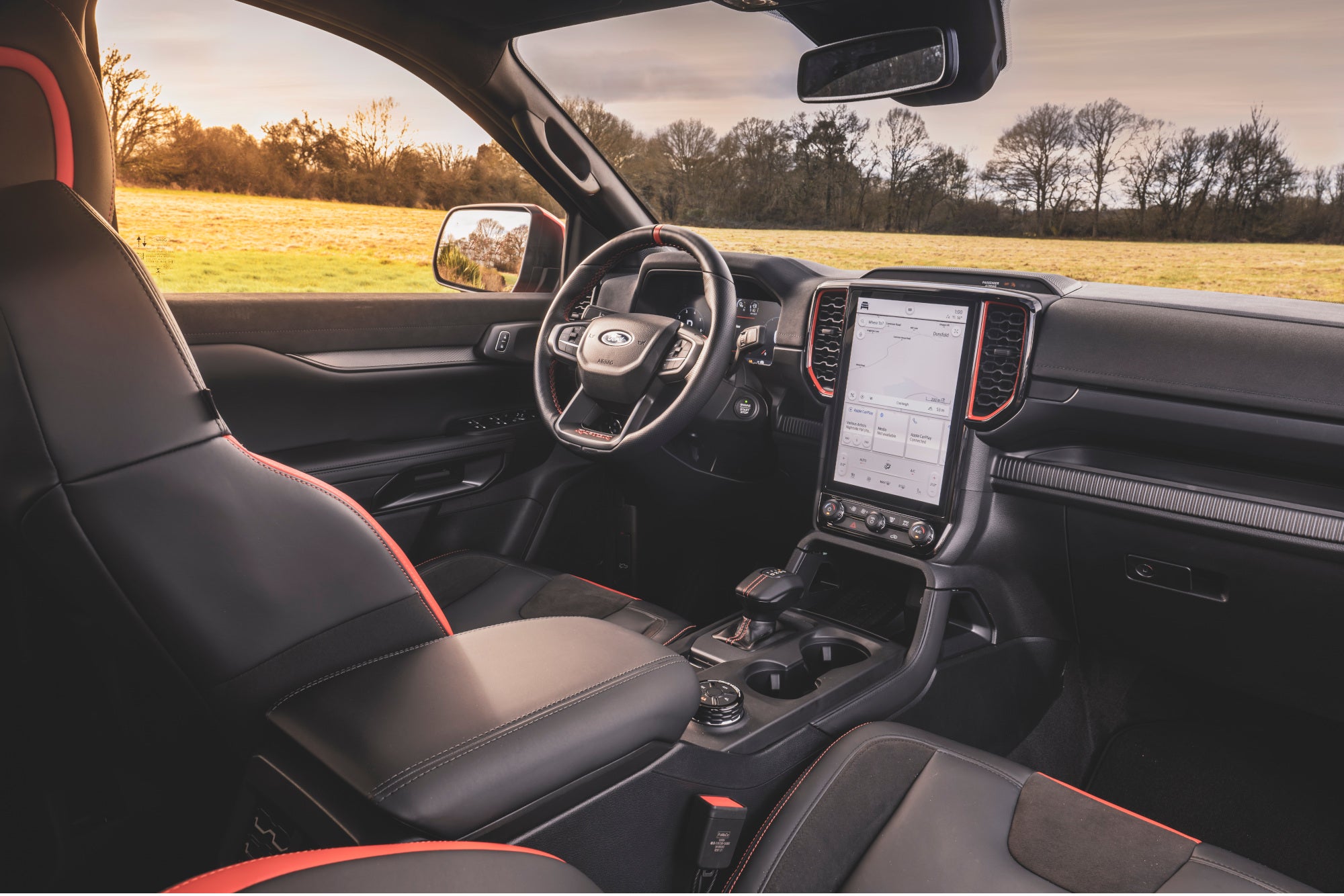 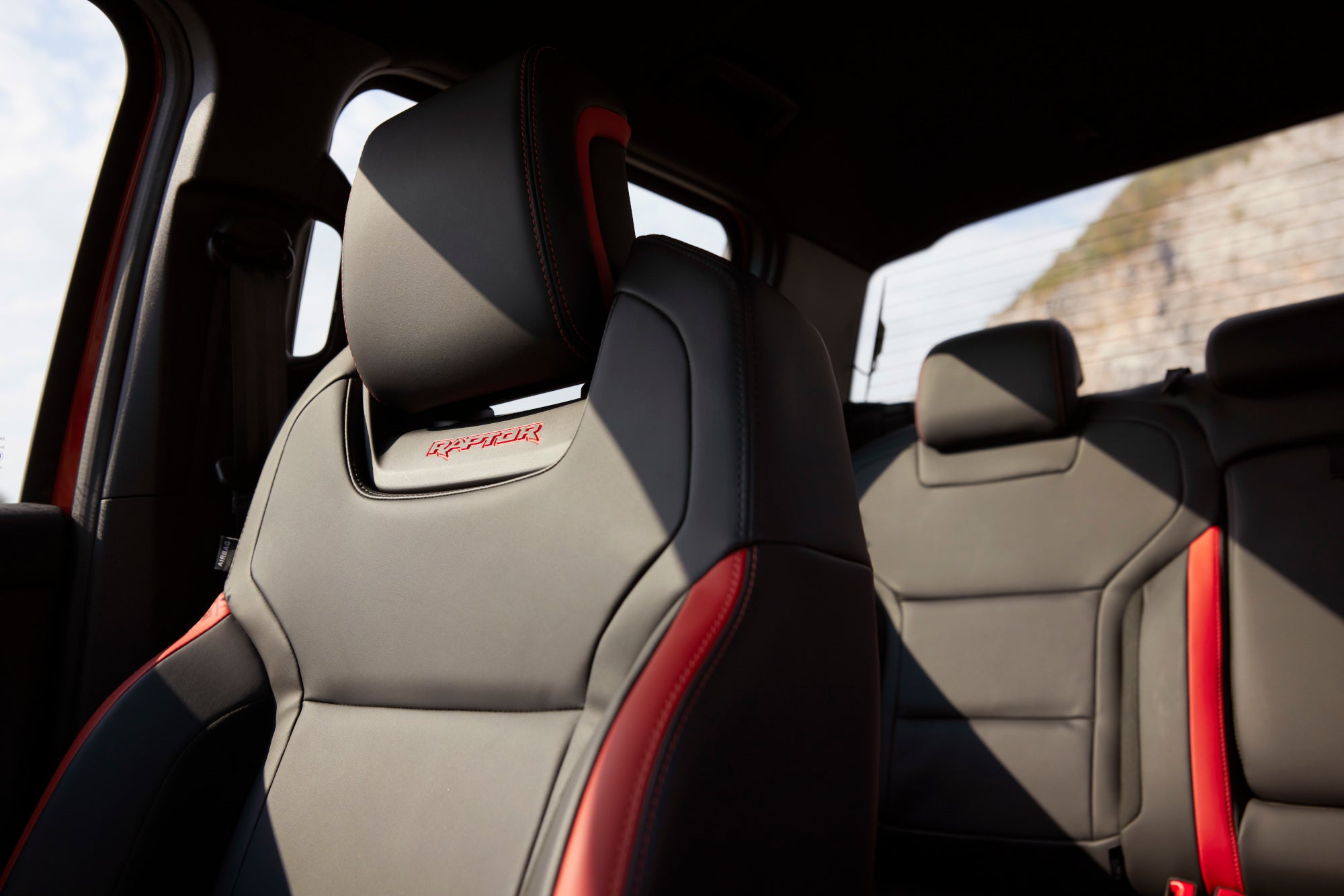 Ford isn’t letting up lately; between its efforts to go electric with the F-150 Lightning, and its investment in high-performance Bronco models, it’s been doing huge things in the truck world. One could easily forget that the company virtually abandoned cars in the US just a few years ago.

Overall, there’s plenty to like about the new Ford Ranger Raptor. It looks set to come with big grunt, all the hardware you could want to go off-road, and a chassis and suspension tuned to make quick progress across any desert you might desire to cross. Expect more detail on local specifics as the Ranger Raptor gets closer to launch in the US and abroad.

Got a tip? Let the author know: [email protected]

Next-Generation Subaru WRX Spied, Will Have At Least 280bhp