The supply of cheap cars may seem like it’s shrinking as automakers urge customers to go buy bigger and more expensive SUVs. More and more compact cars are being phased out
in favor of larger vehicles, average purchase prices are going up, cars get more Swiss Army knife-like by the year, and auto loans are stretching into the distance to account for it. “Of course, I bought the right car,” people think, staring at the lifted rhombus in their driveway. “It can do anything.” There’s another justification besides utility, however: Price. There are still cars that do things well and cost very little money. The 2021 Kia Rio five-door hatchback is one of them.

Am I going to rave about it? No. It’s not a car most people rave about. However, it is solid transportation that, while lacking in the complete, utter peace of mind that a crossover sending power to all four wheels can deliver, is still worth recommending.

I expected the Rio hatch to be as boring and appliance-y as they come. But it’s a little more than that. It fits just about anywhere, gets great fuel economy, and stands up to urban abuse. It may not quite be charming, but it’s not totally uninspiring, either. 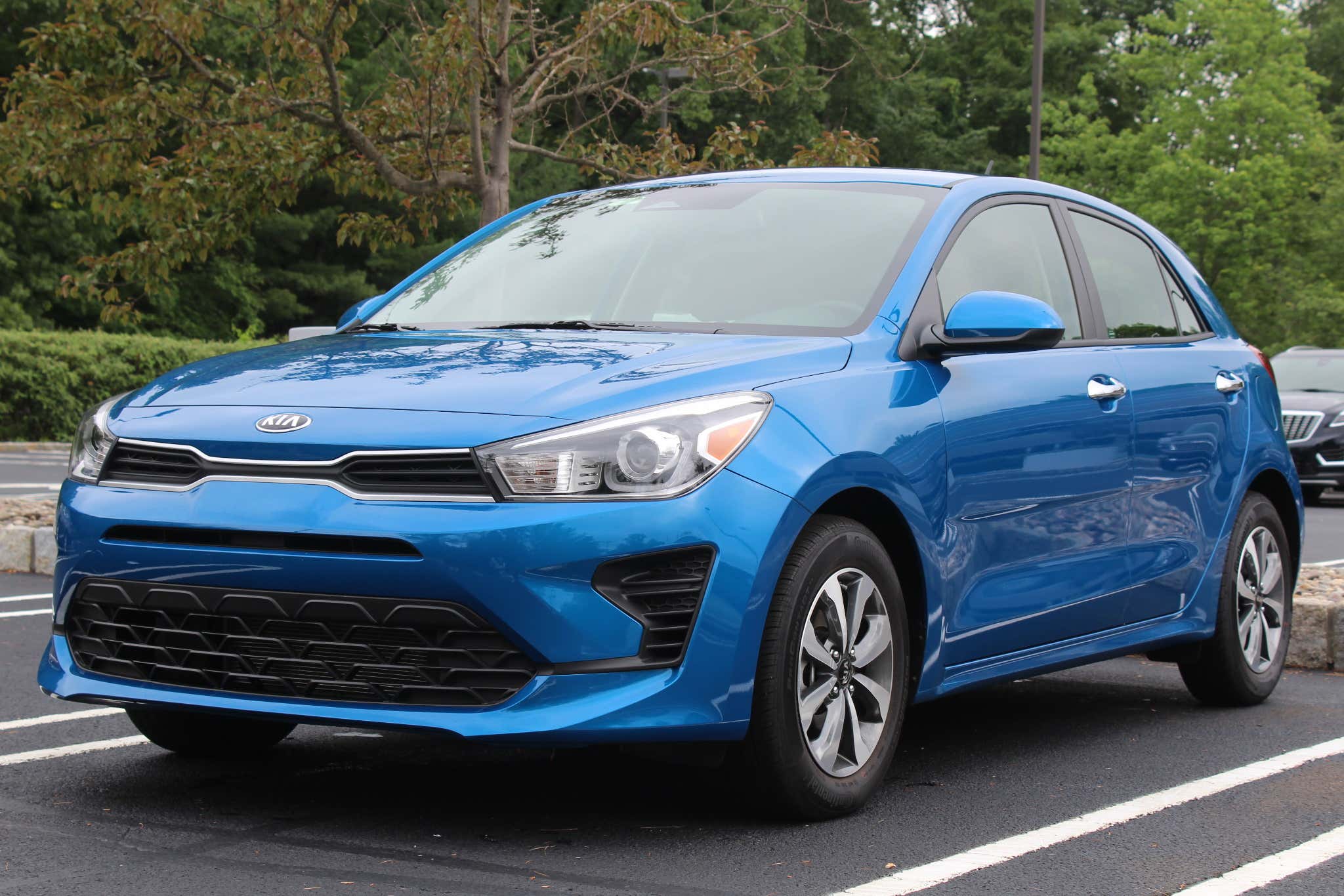 Besides the Rio sedan, the Rio subcompact hatchback is the cheapest car Kia makes. Slotted below the slightly larger Forte, it’s also the smallest. The current, fourth-generation has been around since 2016, so it’s not exactly a new car and is likely due for an update soon.

On the outside, the Rio looks modern enough, although it’s admittedly a car that blends into traffic very well. Even dressed in “Sporty Blue” like the test car was, it’s pedestrian and unoffensive. Large, front headlights flank Kia’s new grille with the signature pinch in the middle, and at the back, two large, rectangular taillights are set into the car’s inoffensive rear fascia. The Rio doesn’t wear the new and sharpened design language that the stylish Carnival, Seltos, Sorento, and Telluride do, however, which might make it look dated to some. 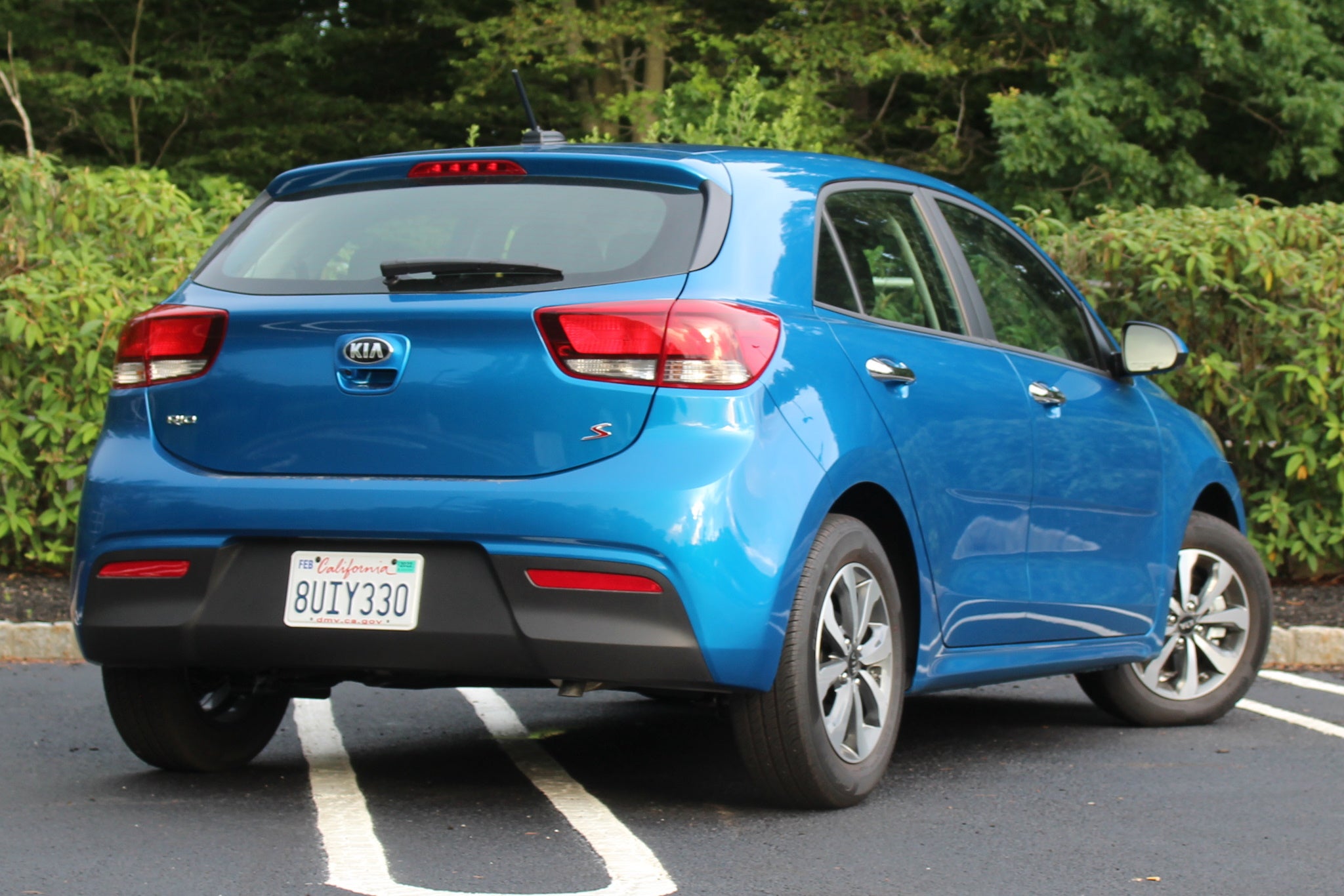 The interior is much the same, although the center stack looks fairly modern for how old the car is. It’s good-looking in an inexpensive sort of way, and it presented me with everything I needed in an attractive enough manner. The only button beside the media and climate controls in the Rio I drove simply said “SPORT,” which kept the engine at higher revs and made the transmission more responsive. The steering wheel controls are straight out of a number of other Kias, and they’re intuitively placed. Besides the switchgear, the seats are acceptably comfortable, if not luxurious. Rear legroom is adequate, if not expansive. It’s not tight back there at all for somebody around my five-foot, 10-inch height.

As far as tech goes, wireless Apple CarPlay and Android Auto are standard, which is a huge plus. There’s also regular Bluetooth if you’re not a fan of those, and three USB ports to charge devices (two in the front, one in the rear). The Rio gets the basics right, even if it’s a little light on optional extras. Heated seats aren’t available as an option, for instance. This is a cheap car, yes, but stuff like that is available on similarly priced cars, such as the Toyota Corolla. 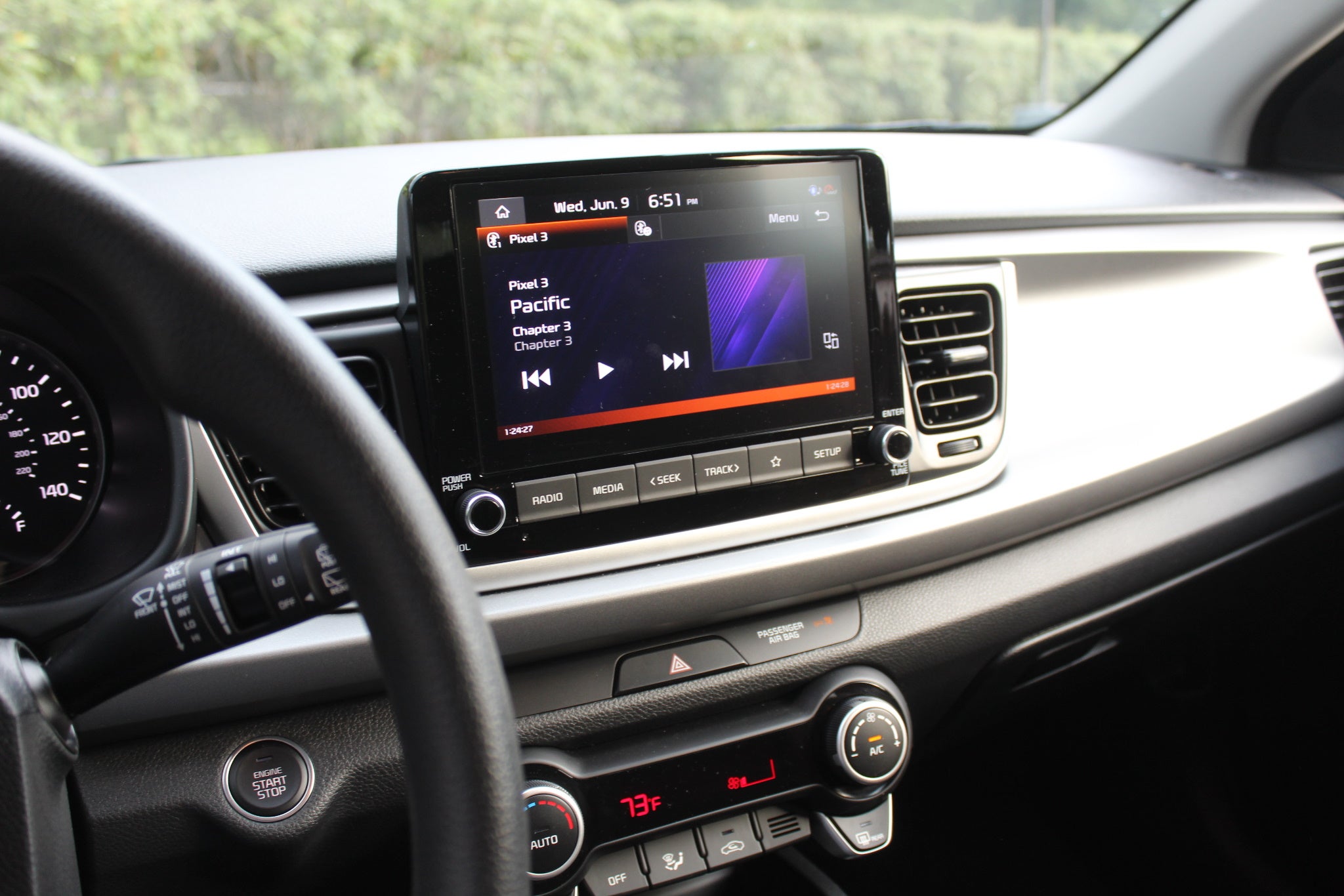 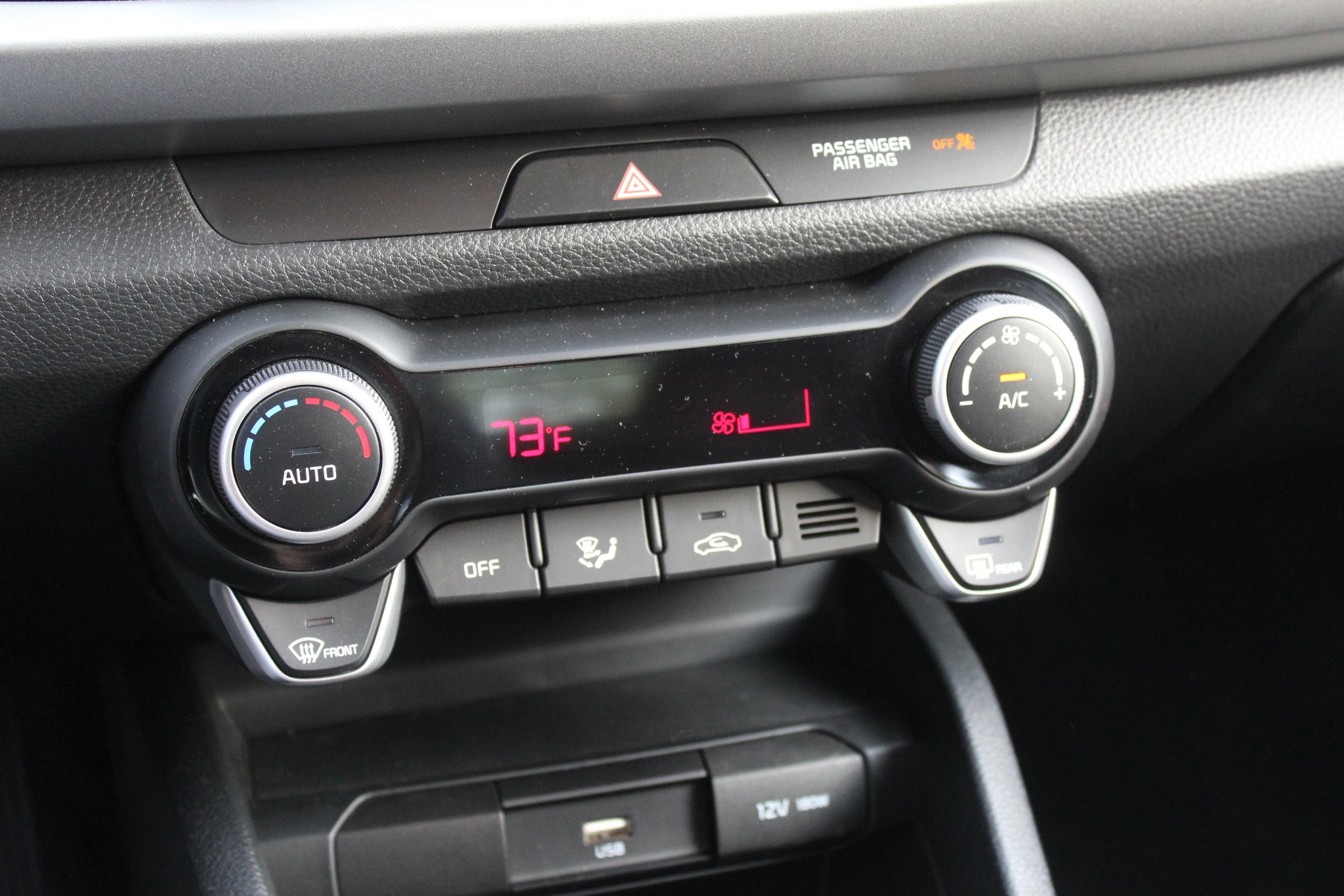 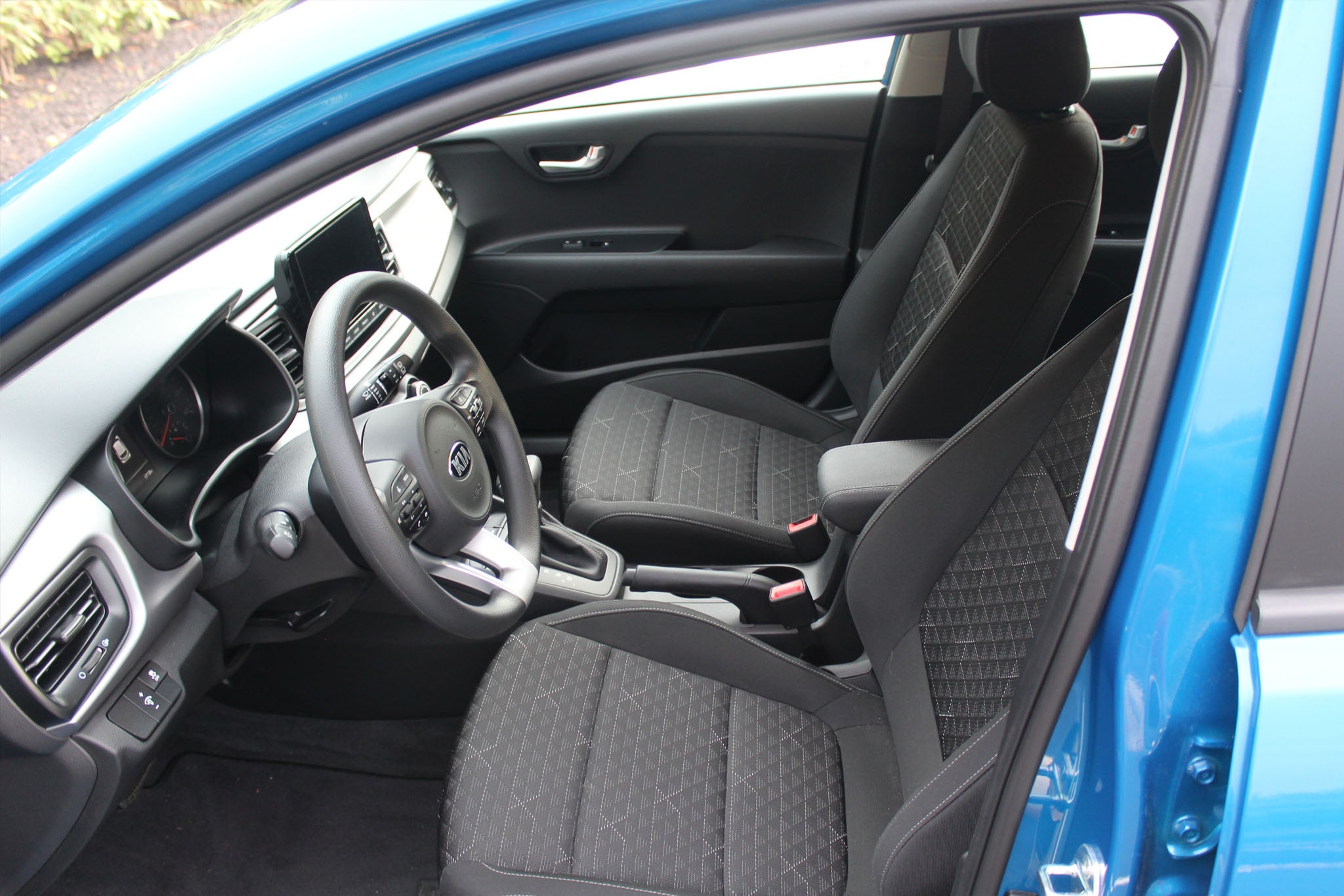 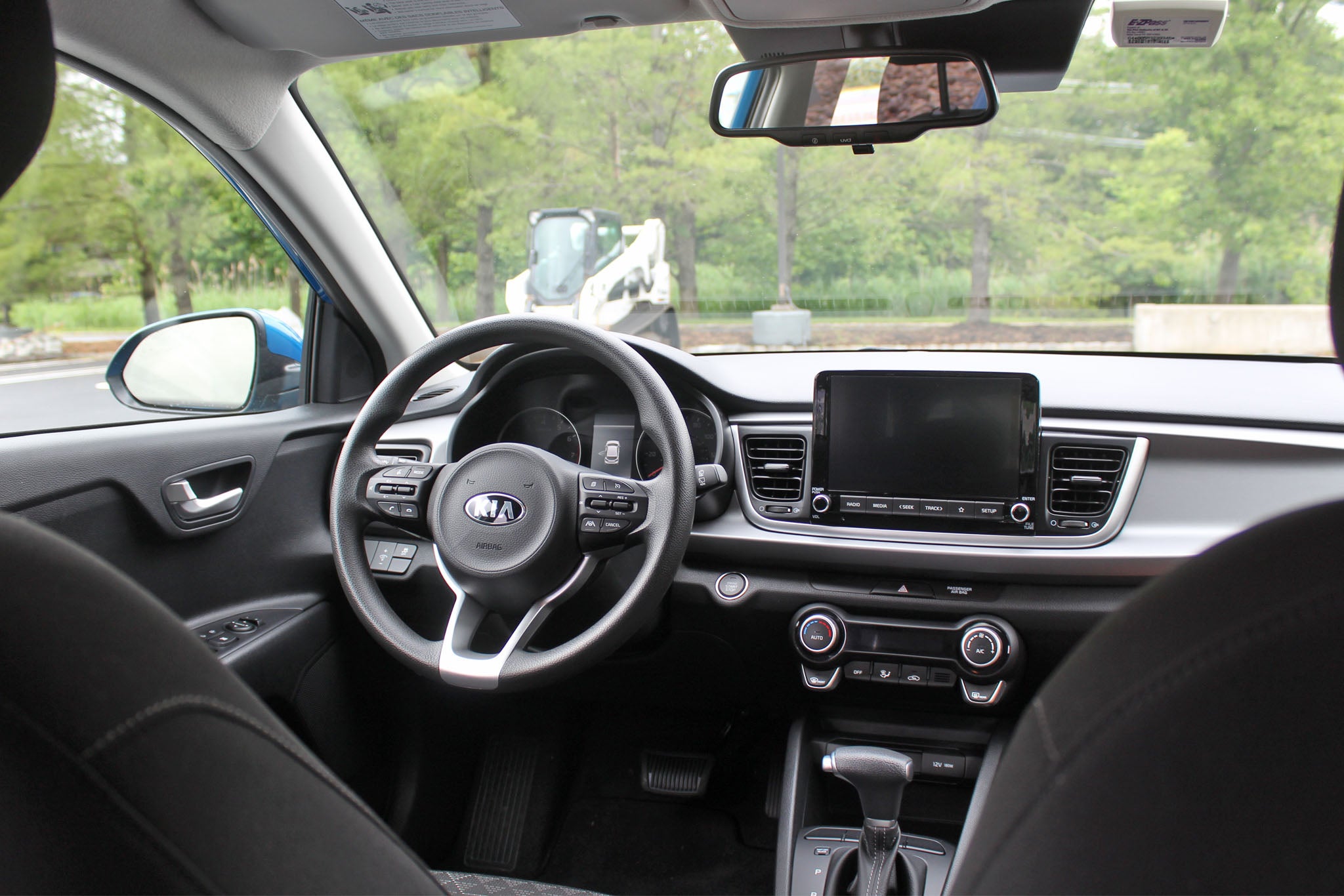 The Rio is powered by a 1.6-liter four-cylinder engine that produces a claimed 120 horsepower and 112 pound-feet of torque. That’s all sent to the front wheels via a continuously variable transmission. That may sound unappealing, but keep in mind that the whole car weighs in at 2,762 pounds. In an era where cars just get bigger and heavier, the Rio’s commitment to minimalism is worthwhile.

The Rio hatchback didn’t feel very modern from behind the wheel, which isn’t a bad thing depending on who you ask. The steering felt a generation old—a little too heavy and tight. Likewise, the car made no attempt to be sporty as far the suspension tuning was concerned, despite weighing under 2,800 pounds. It rode like it wasn’t afraid of a set of railroad tracks, an unpaved road, or a pothole. It can’t be specced with a wheel bigger than 15-inches and it didn’t even try to pretend to be able to corner flat. But it was very comfortable and confidence-inspiring in normal driving as a result.

Its wheelbase is also acceptably short at 101.6-inches, which translated into a turning radius appropriate for tight city parking spots and driving narrow lanes. The Rio was one of the few cars that could pull out of the tandem parking spot behind my building even with another car boxing it in. There was just barely enough space to ease into the adjacent strip of pavement, and barely enough space to get back in. When this maneuverability was combined with a chassis that felt ready for rough pavement and a drivetrain that was at the very least responsive, the Rio hatchback was a great city car that felt prepared for abuse. 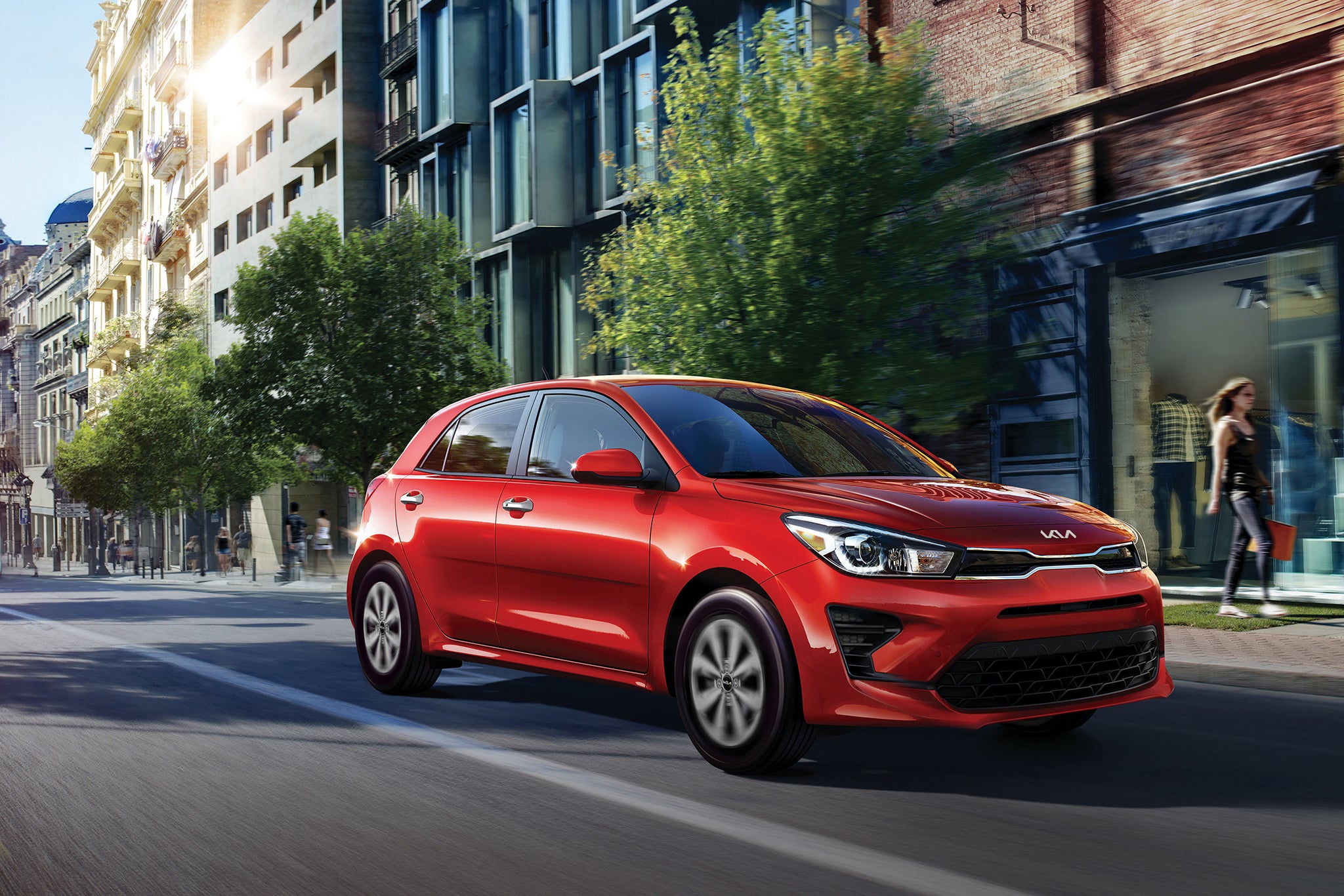 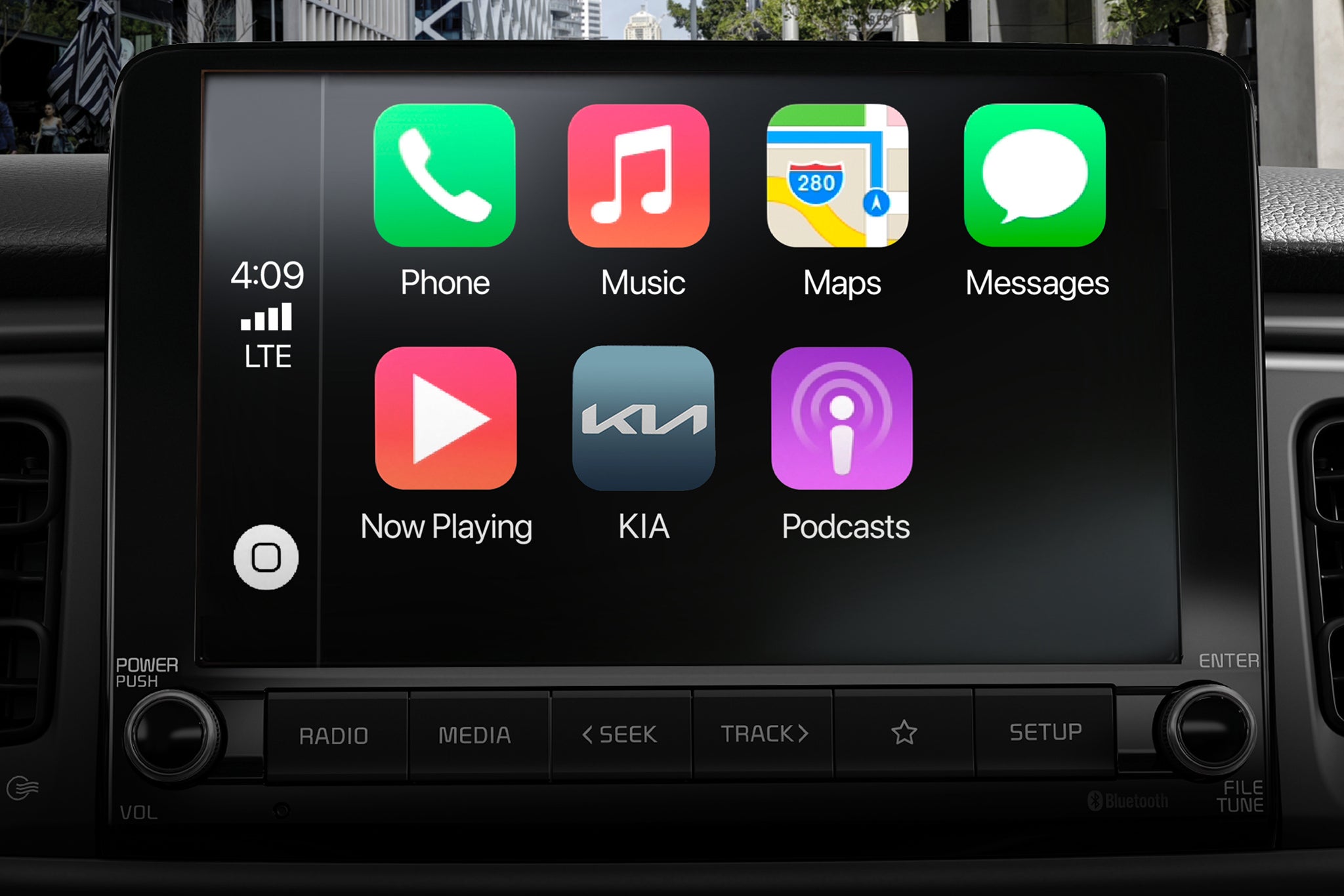 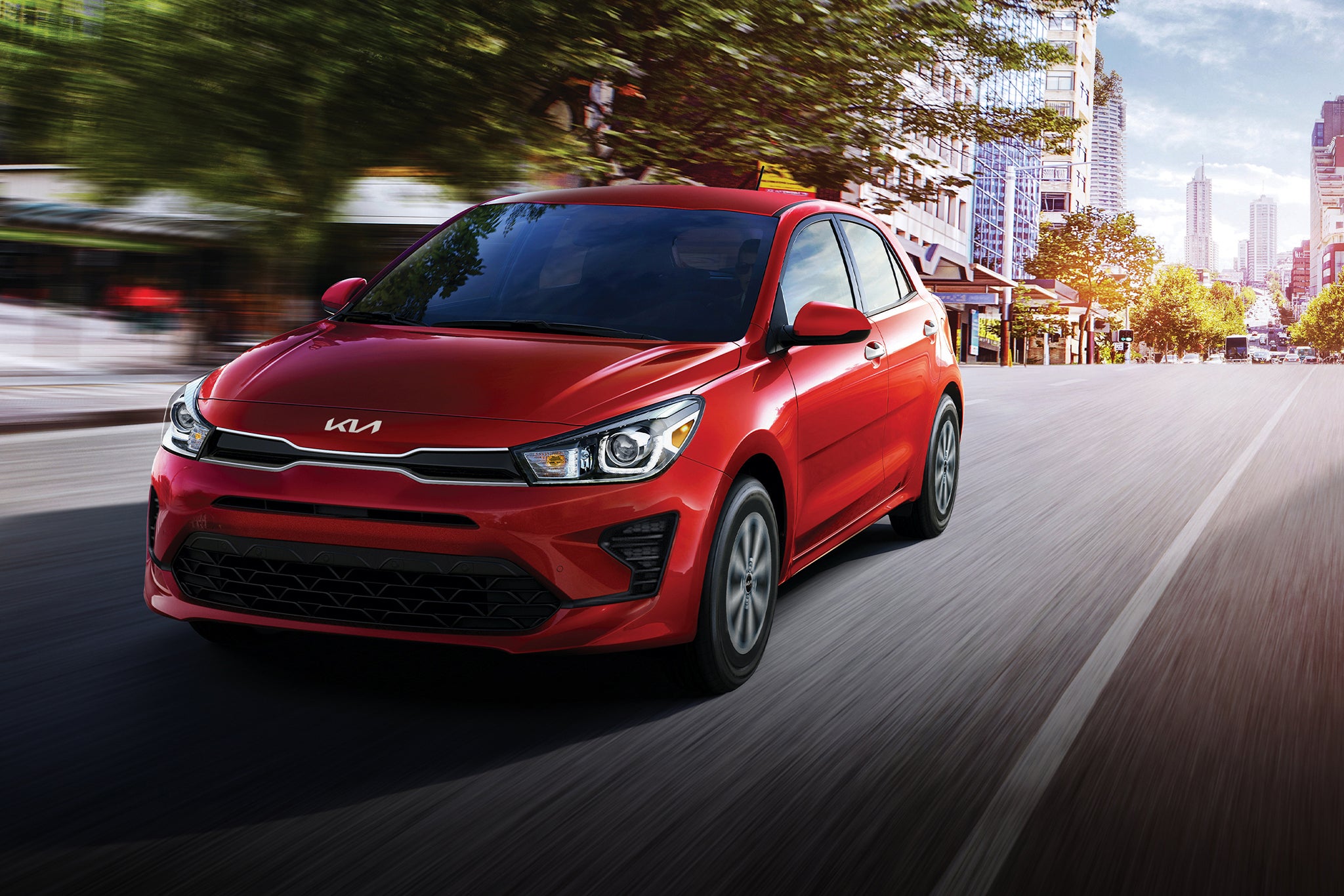 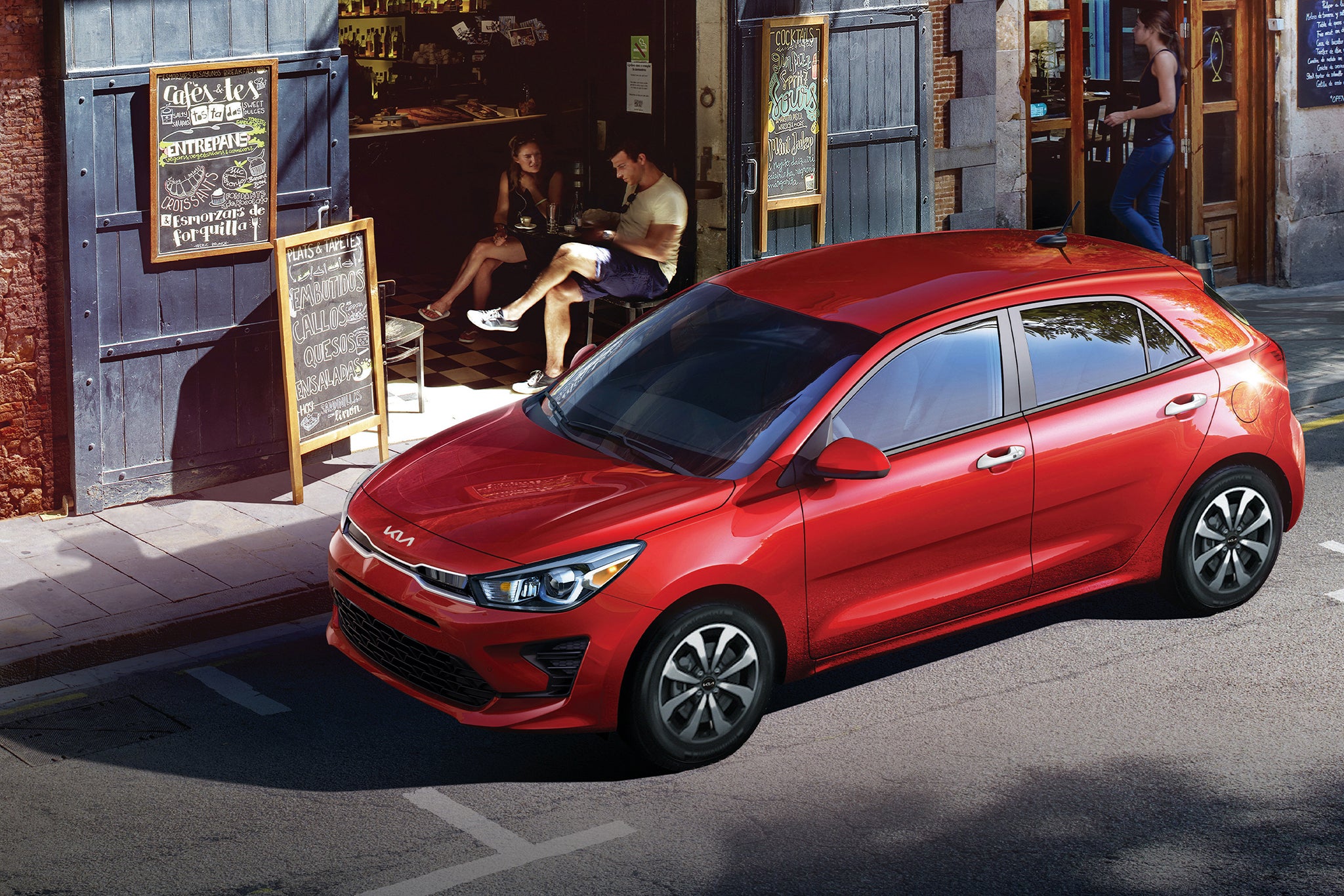 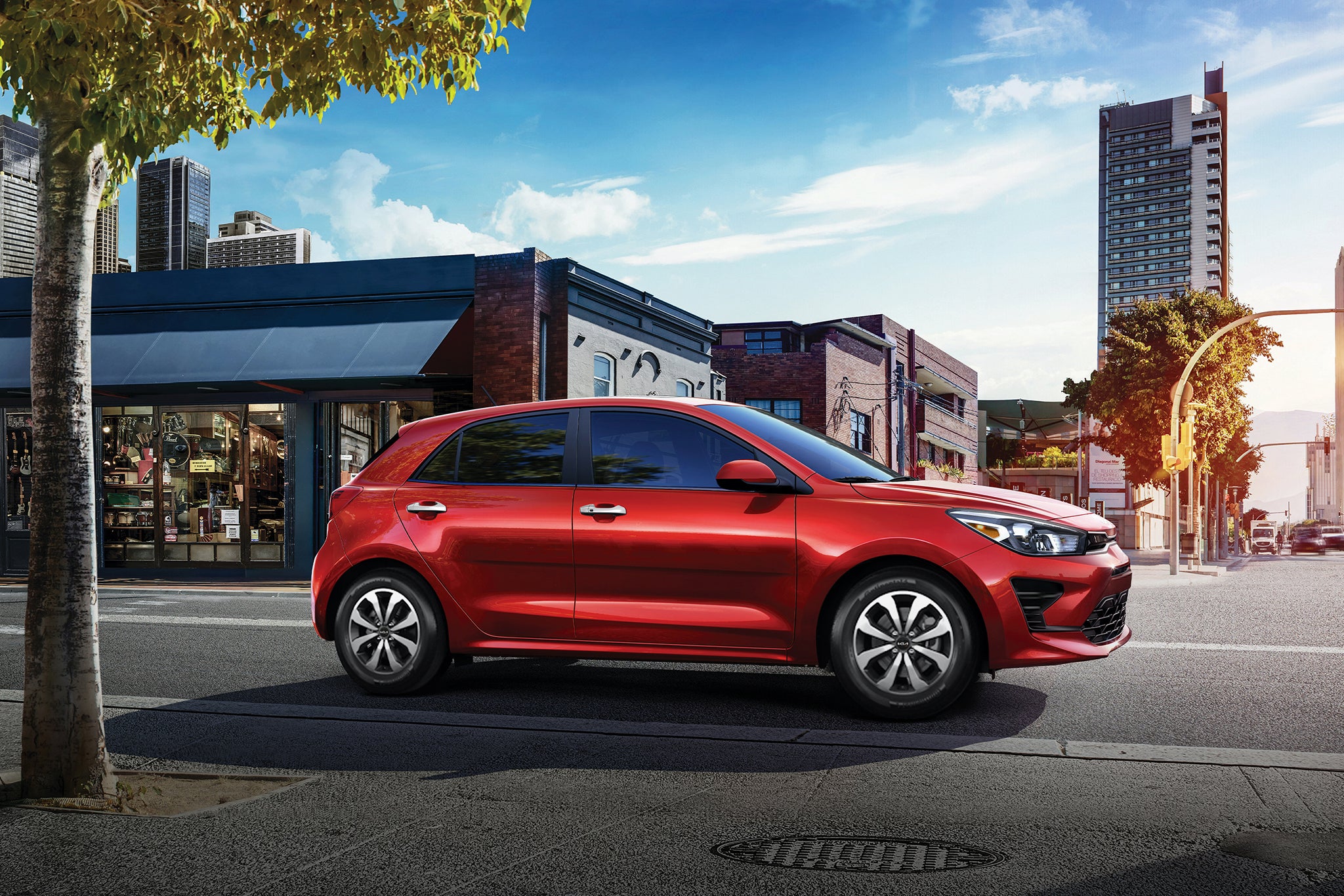 The CVT performed admirably, acting like it had gears when it doesn’t. However, when I floored it—which happened frequently because the 1.6-liter engine only produces 120 hp—the car immediately gave me all the power it could, not wasting any time kicking through its imaginary ratios. Don’t get me wrong: the power isn’t much, it’s just barely adequate. But the tradeoff is that the Rio will get good fuel economy pretty much no matter what you do with it.

The noise on the highway is, well, I’ll say it’s a little better than what you would expect from an economy car. There’s more wind and road noise than you might want, but the bottom line is, the car is quiet enough, comfortable enough, and the right price.

The Highs and Lows

The best parts of this car are how affordable everything about it is, how good it is in an urban environment, and its utility. Fold down the rear seats and you get crossover levels of storage. Keep them up and there’s comfortable space for two people in the back, or three in a pinch. You just can’t get this thing under 30 mpg no matter what you do. The fuel economy is very consistent and downright impressive on the highway. The standard tech features are also nice. Everything is where you expect it to be; there’s power in that simplicity and predictability. 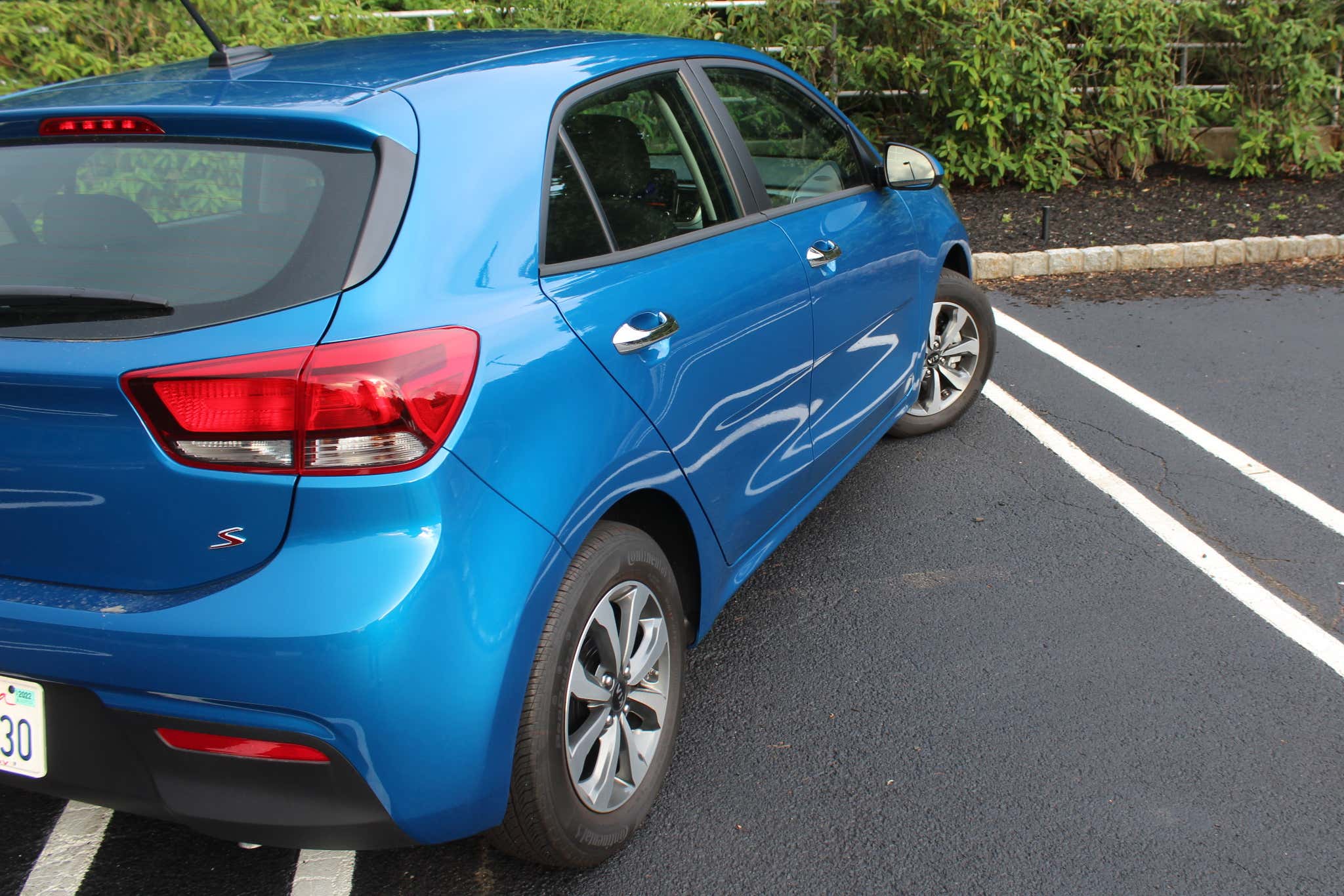 On the downside, a few of the optional extras this car was equipped with didn’t really work great. Most of the added price on my car consisted of the $1,800 Technology Package, which is basically the box you check to get most of the creature comforts. It’s a box definitely worth checking—there aren’t many others, to be fair—however, driver-assist gadgets that work well on other Kias didn’t do great here. The automaker’s Lane-Follow Assist system performs admirably on cars like the K5, but on the Rio, it could barely hang onto a lane and just wasn’t worth using. If the price could be trimmed by not having it, I would’ve definitely done it. That being said, the list of other nice things included in the Technology Package, like automatic high beams and a larger, eight-inch center display make it worth getting, and Lane-Follow can be switched off.

There’s only one 2022 Rio hatch trim level called simply “S.” With it, you get the 120-hp four-cylinder, heated rear glass, halogen headlights, a “space-saver” spare tire, wireless Android Auto and Apple CarPlay, cruise control, and a 60/40 split-folding rear seat. The price starts at a tempting $18,085. A fully loaded 2021 Rio hatch, which is what Kia loaned me, with bells and whistles like the Technology Package will cost you $21,130. All of the other extras are things like floor mats, wheel locks, and cargo nets; acceptable add-ons if desired, but certainly things that could be purchased later for a cheaper price. If you’re really jonesing for a set of OEM Kia floor mats, however, don’t let me stop you. They’ll be $155.

This car’s competition includes other very reasonable offerings from a slew of other automakers, though, admittedly, it’s a list that seems to be growing shorter by the year. The Mitsubishi Mirage, Chevy Spark, and Nissan Versa all compete with the Rio, though I will say it felt better than the more expensive Sentra I drove earlier this year. The seats were more comfortable, the overall car felt better put-together, and the transmission, despite also being a CVT, behaved more enjoyably. But the Rio’s biggest problem is that the Toyota Corolla exists. Also available as both a sedan and a hatch, the Corolla is newer, better-looking, and can be had with a manual transmission, if you’re into that kind of thing. It’s just a couple of thousand dollars more expensive. But there’s a reason why the Corolla is one of the all-time most popular compact cars. Frankly, I think the only reason anyone would choose the Rio over the Corolla is that they only care about the out-the-door price tag. 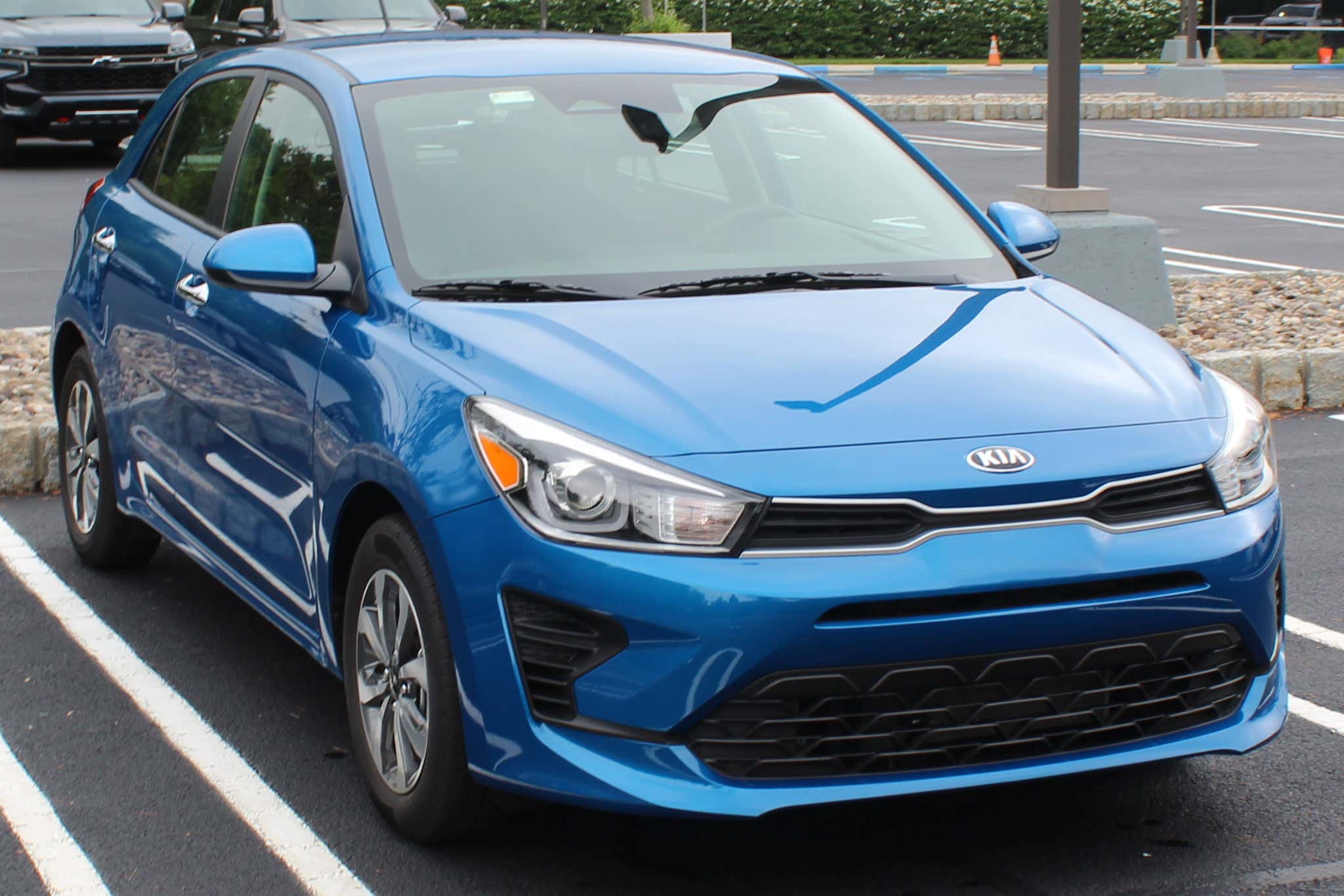 The Rio does a few things right on the sustainability front, although it makes no focused effort as a part of its design or marketing. The fuel economy is good which is always nice, it’s a small car that isn’t very resource-intensive to build as far as automobiles go, and things like leather seats, which can sometimes be linked to animals raised on deforested land, are not even an option here. This car is better for the environment than other combustion-engined cars simply due to its size, weight, and economical nature, however, it’s not like the BMW i3 or the Prius that are marketed to people concerned about their perceived carbon footprint. From an owner’s perspective, though, that 36 mpg combined is tough to beat.

Do you want an inexpensive car that has the right standard equipment and feels like it will take a beating? This is probably it. If you live in the city and have very limited space in which to drive and park, don’t wanna feel that next pothole in your back, or really want to avoid filling a car with gas, this is a good choice. W

ith plenty of practicality and good value, the Rio was not the most memorable car I’ve tested, but one of the few new cars I could legitimately afford, and a pretty good one at that. These sorts of vehicles are gradually going away. Get them while you can.