The first service cost came to Rs. 22K, while the maximum fuel efficiency I was able to extract was a diesel-like 22.7 km/l.

BHPian sauravpat recently shared this about his 2022 Audi A4 Premium. Our A4 went in for its first service yesterday. Routine jobs like Oil changes and filter changes were carried out. The service center also took care of the headlamp washer mechanism not retracting back sometimes for no extra cost. The washing was adequate. The bill came out to Rs.22k. This was in line with my expectation so no complaints. However, the initial estimate sent to me was very high and unnecessarily inflated. I had to ask for an explanation for some of the items post which they were removed immediately. It looks like I will have to check the items carefully every time since my parents won’t bother to check. Ready to go out!

Took the A4 to Goa last weekend from Pune. Amboli ghat was extremely beautiful and we had no fatigue after 8.5 hours. The quietness of the cabin and superlative ride meant that the whole ride was a breeze. The width of the car did pose some problems on the small single lane roads where I wished it had a 360 degree camera.

A 30 km stretch before the Amboli ghat is completely washed away because of the rains and has monstrous potholes and craters. The A4 did not scrape itself even once on these roads. We did not need to slow down too much or baby the car even over these roads due to the firm suspension setup. Hypermiling with the A4:

I drove from Pune to Kolhapur in the morning with a very light foot and used cruise control at every opportunity. Once you set the cruise control at 80 kmph and put the car in efficiency mode, the mild hybrid system and auto start-stop system kick in and cutoff the engine on every level and downhill stretch of the highway. You basically coast along at 80kmph and the engine only turns on when you encounter an uphill stretch. You see this as the car goes silent and the revs fall to 0 rpm.

I was able to achieve a quite frankly staggering 22.7 kmpl over 220 kilometers. Never expected a 2 Litre turbo petrol in a big car to cross the 20 kmpl mark. It is certainly possible with a lot of patience. Just make sure not to fall asleep! 9 months on, the A4 is chugging along at a good pace with 14.5k kilometers under its belt. Apart from the headlamp washer niggle, there have been no issues and that was taken care of immediately as well.

It has been a great experience so far. Hoping it stays the same way. The A4 has made multiple trips to Nashik, Ahmednagar, Kolhapur, Mumbai and one trip to Goa (850km), and one big Coastal Karnataka trip (1700km).

It has scraped its bottom just once over all these roads. We have also suffered the first dents and scrapes on the car and the initial honeymoon period has worn off. It has very well justified our decision to buy the A4 since it really is a great all-rounder. 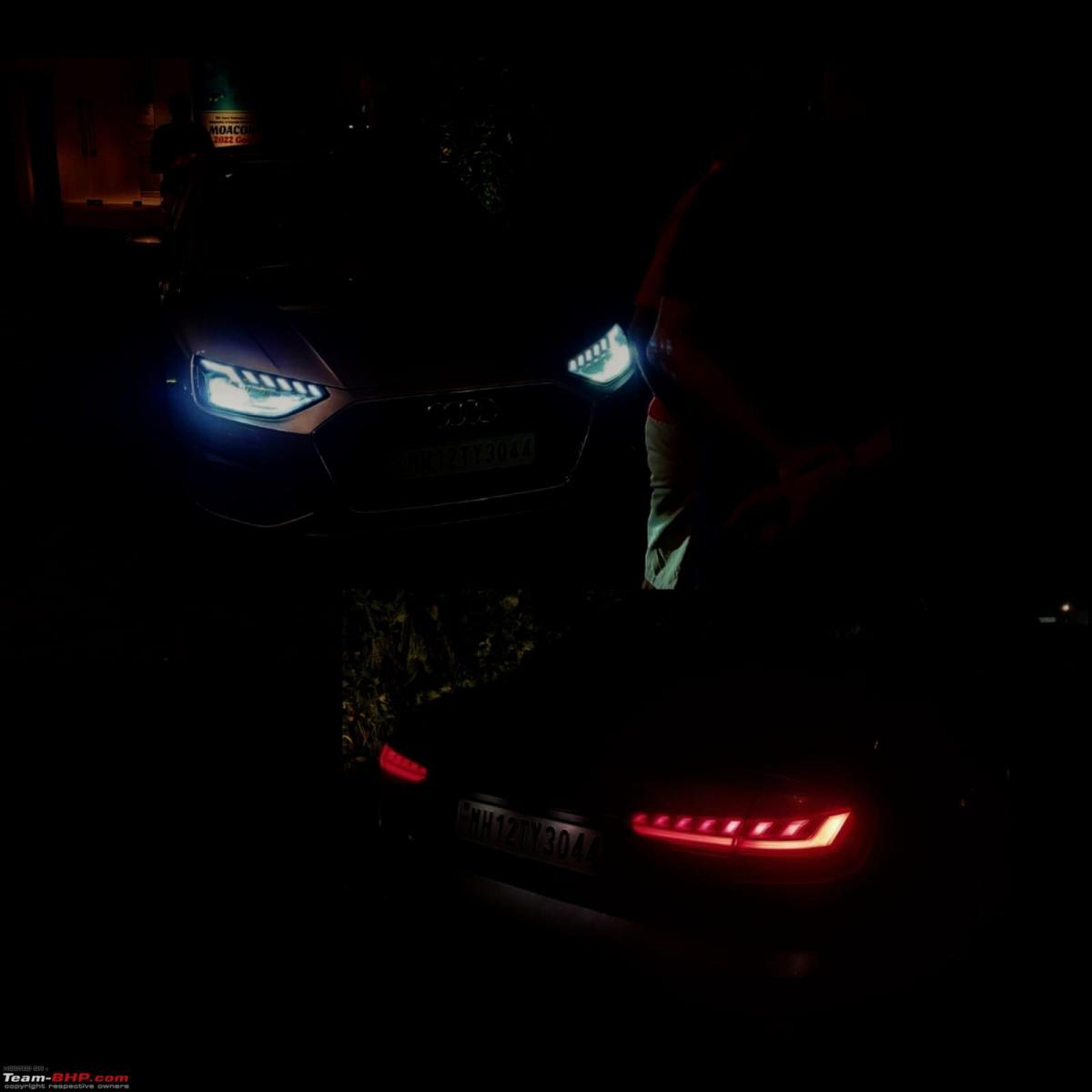 More fuel efficient than the Kodiaq, Tiguan, Superb as well. No rattles or issues. We have been using normal 91-octane petrol. We are planning to switch to XP95 when the EP20 fuels are introduced. 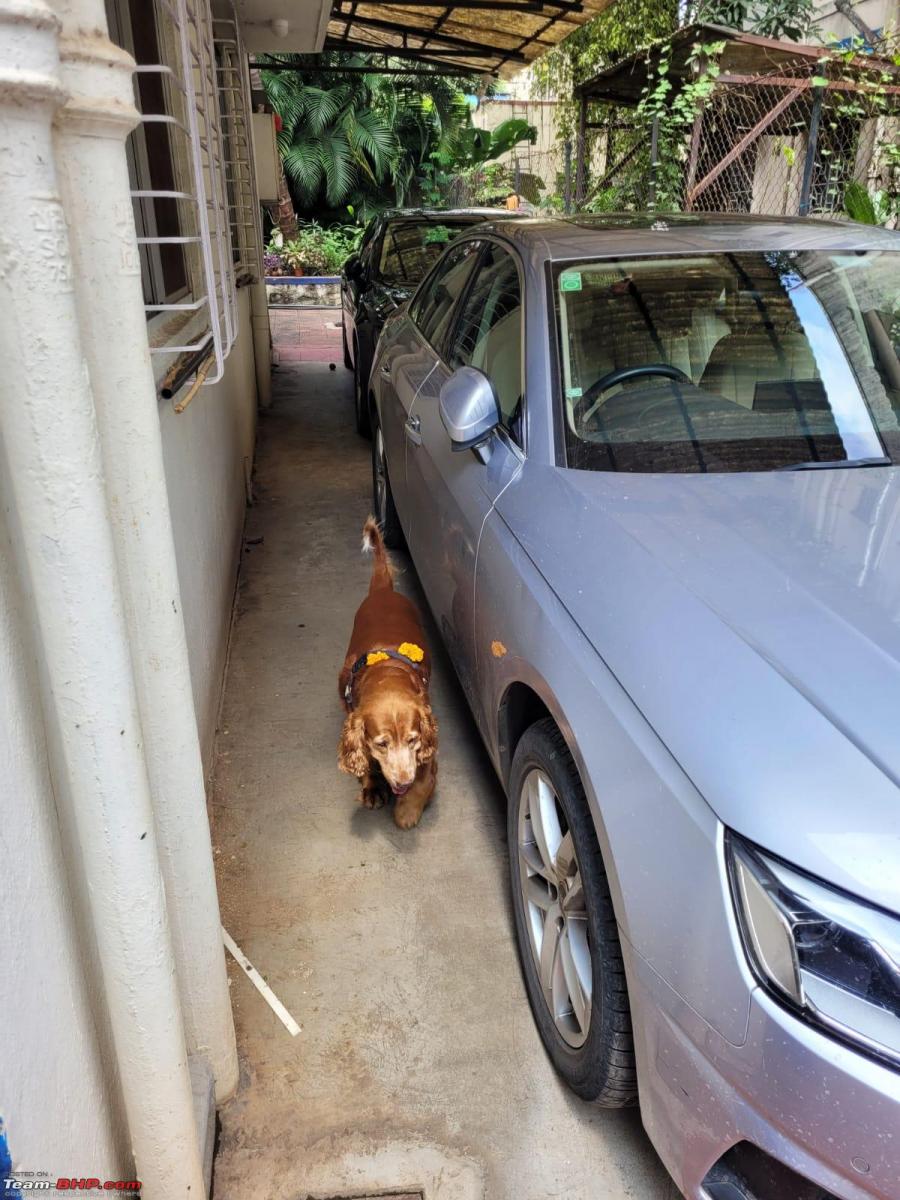 Our dog running around the A4

Considering that the price of the Premium variant has increased by a whopping 3 lakhs in these 9 months and that the Kodiaq and Superb top end variants are more expensive than the price at which we bought this car, it is turning out to be decently good value for money as well.